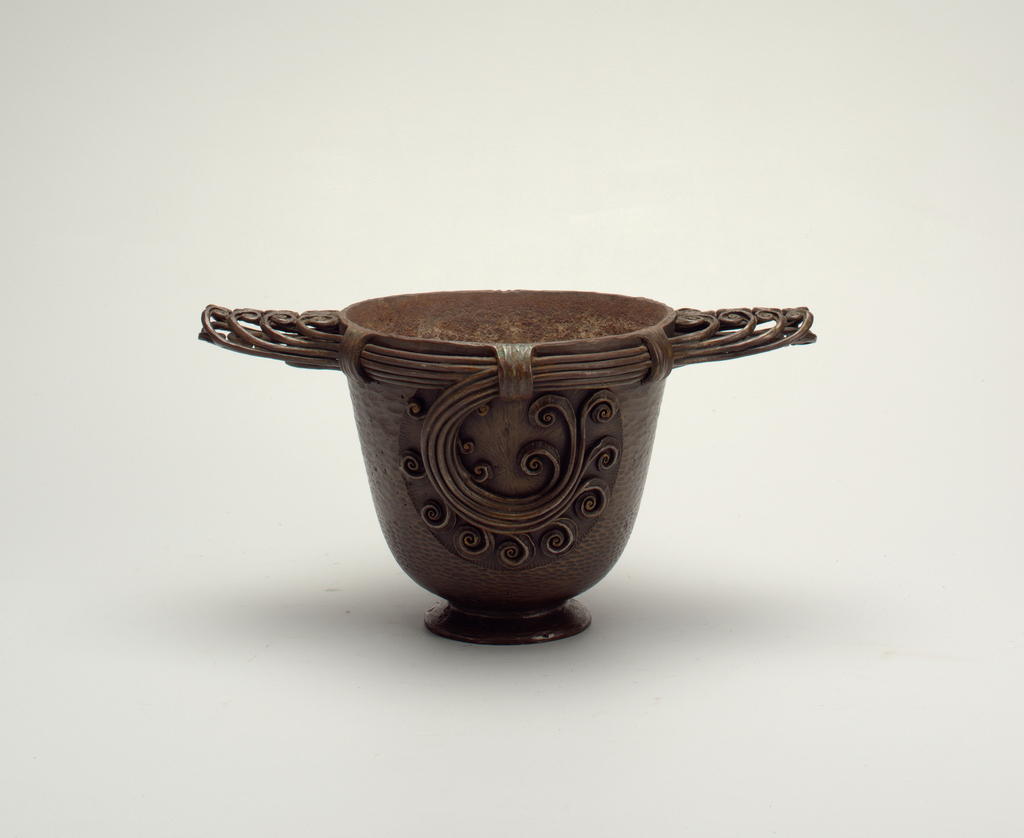 Edgar Brandt showed promise in metalwork since his teenage years. He forged a rose in iron for his graduation masterwork from the École Nationale Professionnelle de Vierzon, located in a traditional site of metallurgy manufacture in central France. Following further training and certification through the Brevet Technicien Superieur Brandt served two years in the 153rd infantry in Nancy before founding a metalworking business in 1902. Thereafter he created and exhibited medal-worthy screens, grilles, lamp bases, vases, and other decorative objects, many embellished with his signature dense floral forms and lively spirals. In 1914 Brandt’s life changed course and he was deployed on the eastern front where he discovered that the French infantry had no lightweight weapon with a long target-range. Thus his metalworking skills were met with much less romantic and artistic challenges and that same year he returned to Paris with the charge to design and produce a 60mm mortar and ammunition that became the standards upon which European weaponry was based into the mid-twentieth century.

Following his military service in 1919 Brandt inherited a machine shop from his father and in conjunction with the architect Henri Favier expanded his business into a sizable metalworking studio staffed with thirty craftsmen. Made during the first years of the studio’s production, this cachepot exhibits the sense of fluid movement that Brandt was able to achieve in metal. This example features a winding cluster of volutes and vine-like handles evocative of the living plant that they may have framed. These flowing lines and stylized organic forms continued to characterize Brandt’s work. His participation in the 1925 Paris Exposition brought him great acclaim and following that success, Brandt opened his own gallery in Paris, as well as a showroom in New York, called Ferrobrandt, which was in business from 1925 to the fall of 1927. He completed many noteworthy public commissions of buildings and monuments, as well as a great number of ambitious and beautiful decorative objects that adorned high style homes of the early twentieth century. A master blacksmith of his generation, Brandt built his reputation on a discordant combination of metalwork in guns and roses.

← The Scenic Hudson in Your Home
A Triumph of Simplicity →