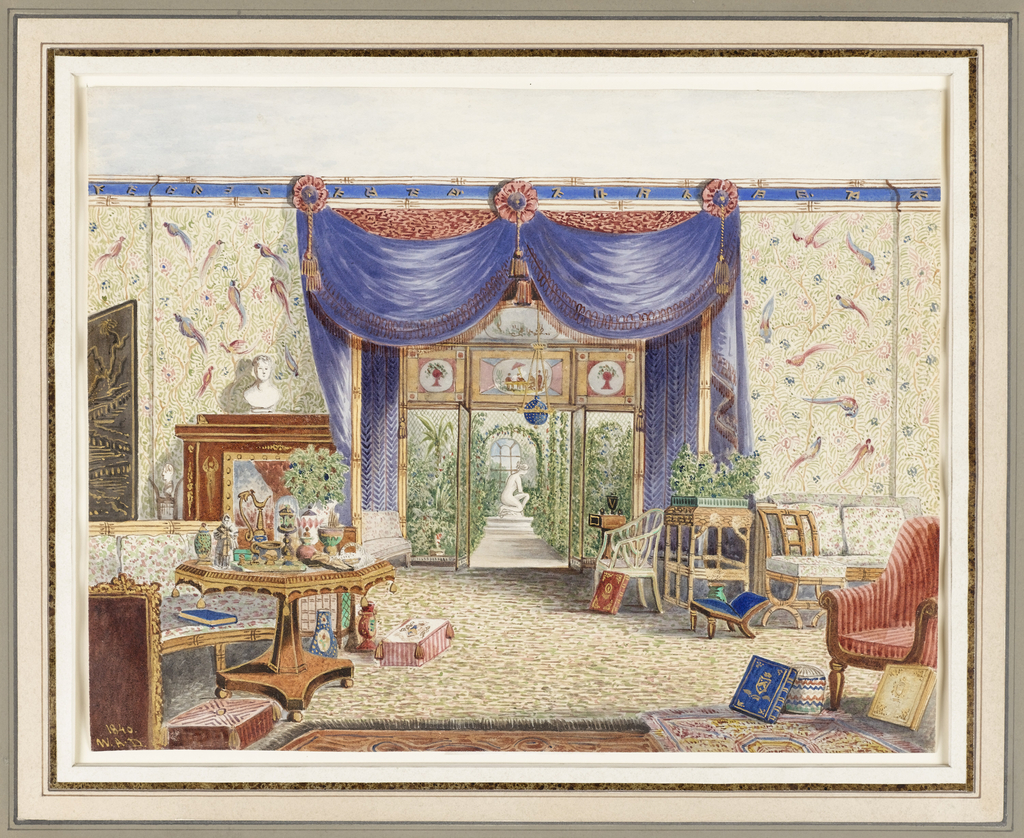 This room portrait is one of two views of the Middleton Park drawing room in Cooper Hewitt’s Thaw Collection.  The interior was designed in the chinoiserie style and shows a room mostly filled with bamboo furniture, a Chinese or Chinese style painted or wallpaper of exotic birds sitting in trees, and a frieze of pseudo-Chinese characters.  Also visible in the middle of the far wall is the door into a conservatory which in England usually was entered through the drawing room, the place where guests were entertained, making it accessible for impressing company.  As a whole, the room reflects the impact of the Brighton Pavilion, the sumptuous summer palace created for the Prince of Wales (future King George IV) starting in 1802 by the firm of John and Frederick Crace.

Middleton’s wallcovering, frieze, bamboo furniture, along with the swaged draperies have their counterparts in the Brighton interiors (documented in Cooper Hewitt’s collection) such as the round Saloon and the west wall of the entrance corridor both from the 1802 renovation.

Middleton had been a fairly plain neoclassic building that was remodeled between 1806 and 1810 by the British architect Thomas Cundy for George Villiers, Viscount of Jersey (later 5th Earl of Jersey) and his Sophie Fane whom he married in 1804.

George Villiers, a courtier for the Prince of Wales,inherited Middleton Park and the title 5th Earl of Jersey when his father died in 1805.  Sophie Fane Child was the granddaughter of Robert Child, head of the Child Bank.  When Sophie’s mother died in 1793, she inherited about £ 60,000 per year as well as the estate of Osterley Park.  She also became a senior partner of the family bank. The renovation of Middleton Park can be seen, therefore, as a celebration of Villiers’ new title and his recent marriage.   As a Gentleman of the Bedchamber to the Prince of Wales (his mother had been one of the Prince’s lovers), Villiers would have been familiar with the stylish exotic interiors planned for Brighton and aimed to keep up with his royal patron.

The so-called Chinese drawing room was one of the earliest interior Middleton renovations, perhaps completed before the rest of the alterations were finished. [i]   Fairly recently, several pieces from the Chinese Drawing Room have turned up on the art market.  Almost certainly coming from Middleton Park are two cabinets sporting  Chinese characters on the canted ends and faux-bamboo trim attributed to the firm of Marsh & Tatham (the same firm supplied furniture for Brighton)sold at Christie’s, New York in 2011.[ii]  Even while these cabinets are not depicted in this drawing or its mate showing the other side of the room in Cooper-Hewitt’s collection (2007-27-26), they are extremely close to other elements in the Chinese room and could have been just out of view in the Delamotte drawings.  Middleton Park was demolished in 1935 after the 1934 sale of its contents and a new house was constructed by Sir Edward Lutyens and his son Robert.  Some of the original interiors survive but not the Chinese Drawing Room.

← From Gray to Black
Meet the Hewitts: New Discoveries! →