Meet the Hewitts: Part eight told about good times at Ringwood Manor and the Hewitt home in Bar Harbor, Maine. This snippet discusses the Hewitt Sisters in their mature years.

“It seems in 1905 that the Hewitts went to Europe and Sally and Nelly thought they would go modern, and purchase an automobile,” wrote Louis West, son of the Hewitts’ gardener, in his memoir, I Remember Ringwood. With their unique style and strong personalities, the Hewitt Sisters have been described in various publications as being quite eccentric. After they died, stories about them magnified. As they aged, grew plump and became set in their ways, it was written that Sarah and Eleanor resisted all “new- fangled” gadgets, including the automobile and the telephone, swore like truck drivers, and collected pornography. Colorful stories appear at the end of this snippet.

Whether or not the Sisters traveled through Europe in this 1905 Renault, we don’t know. Twenty-five small 3″ x 5 1/2″ travel diaries, maintained by Eleanor Hewitt over many years, reveal that they spent a lot of time traveling by car, and that this extensive travel would have required being driven by a chauffeur, in a touring car, with a butler (and pehaps a maid) with room for luggage and purchases in a rack on top. Journeys through Italy, France, Holland, Belgium, Denmark, Austria, Switzerland, Poland, Germany, and the United States are documented, and methodically organized like the Museum Encyclopedic Scrapbooks, geographically by country, city and village. As they revisited a city or site over the years, they would update entries. Pages from one of the Italian travel diaries. Cooper-Hewitt, National Design Museum Library.

With writing in Eleanor’s hand, the diaries precisely describe facts about cities, important country homes and gardens visited, or listed to be visited, over a typical three-month sojourn, usually into the Fall. Typed passages from travel writers, including Edith Wharton, are included. Her sketches document details, and her personal comments on hotels and facilities are endearing “Clean enough to stay. Food decent. Not too clean, but a pretty good lunch.” Sometimes she gives distances for travel by car or train. If Sarah also kept records, they haven’t been found. A separate sketch book illustrates a variety of scenes and details. What is the meaning of “Sally’s Bas Relief”?

Each time the sisters went to Europe, members of the Council of the Museum gave them “large checks to buy the best that could be found in the way of fine things to enhance the beauty and working qualities of the Museum,” wrote Eleanor in 1919. “With munificence past belief, the Council has facilitated the purchase of hundreds of unique objects . . . which have been fruitful sources of inspiration and in constant use by artist artisans.” Eleanor and Sarah also searched for and purchased rare books from a Reference Library Fund designated for ancient and modern illustrated art books, priceless for study. The travel diaries pause from European travel during World War I. From 1914 to 1917, the sisters traveled by car or train to historic homes, gardens, colleges, museums, and other destinations throughout the United States, noted alphabetically, “Maine,” “Maryland,” “Massachusetts,” “New Jersey,” “New Hampshire,” etc., down to “Virginia.” In a 1915 entry, Eleanor wrote she had been “photoing lovely houses.” Apparently, she took photographs, but they have not been saved. Squash blossom necklace. Navajo. Gift of Sarah Cooper Hewitt, 1931.66.1. Sarah loved to acquire jewelry. Did she purchase this directly from a source in the West?

Throughout the war, the Sisters kept current on events in Europe. Below is an excerpt from a letter that Sarah wrote to her friend Sue Bliss in 1920 about the war destruction in Poland. (Both Sarah and Eleanor were expert typists. Eleanor also invented her own style of shorthand. ) On Thursdays, Sarah and Eleanor entertained in their home in New York. Emily Post wrote about them in Etiquette in Society, 1922. “There are a few old-fashioned ladies . . . and two maiden ladies in particular, where on a certain afternoon of the week, if you come in for tea, you are sure to meet not alone those prominent in the world of fashion, but a fair admixture of artists, scientists, authors, inventors, distinguished strangers — in a word Best Society in its truest sense.” “The Misses Hewitt were truly captivating personalities . . . who maintained one of the few real salons, in the French sense of the term, in New York . . . where culture and manners played a greater role than money,” wrote art dealer and historian Germain Seligman in 1961. His memories of this “last bastion of an older American aristocracy” recall that “clocks had stopped just before the turn of the century . . . and while thoroughly aware of the social changes about them, chose to ignore them.” This photograph of Sarah and Eleanor with friends on the Ringwood Manor porch in 1918 is pasted into the Ringwood guestbook dated 1902-1932. Sarah, on the far right, is dressed in a Louis XVI -style riding jacket from the House of Worth, Paris, and a fedora hat. Eleanor is working on an intricate needlepoint project, her beloved pastime. Their close friend Caroline King Duer is seated next to them. The other two are unidentified. As was discussed in Meet the Hewitts: Part Four, Sarah and Eleanor were life-long clients of the House of Worth, the fashion house well-known for dressing the same women as they aged from beauties to “faded old ladies.” The Hewitts’ treasured clothing was worn for years and altered to larger proportions as needed.

Does Sarah have a twinkle in her eyes? Did she truly collect for what her brother Edward called “Sally’s indecent library?” In the Cooper Hewitt Design Library’s rare book room is an art book of nude men and women posed with classical drapery and architecture. Is this “indecent?” You decide. 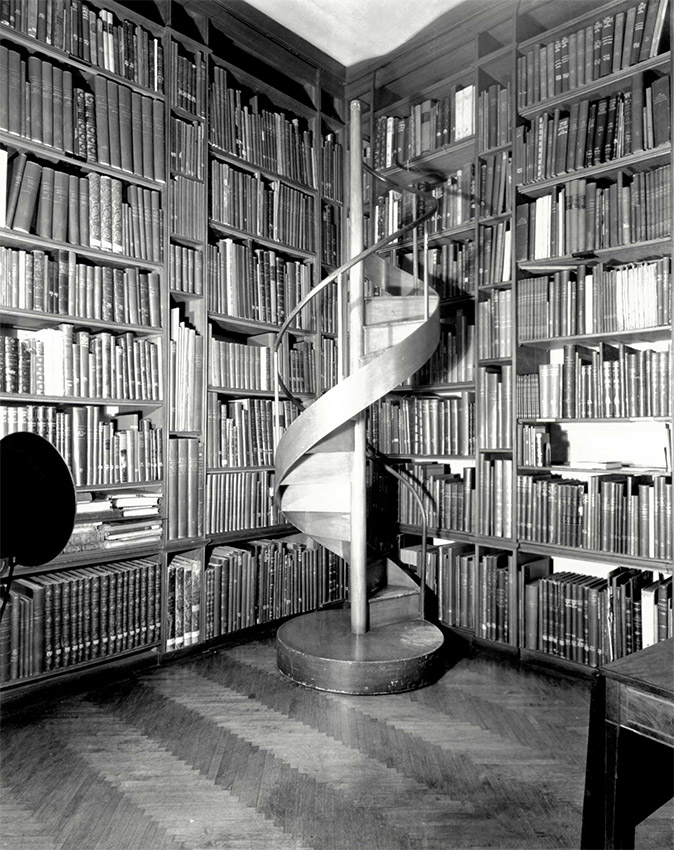 Eleanor died suddenly of bronchitis in November 1924 at age 60. Sarah, devastated by her loss, wrote in a letter from Paris the following year about her grief and shock of traveling alone without her sister, “I found I could not see anything without such great mental torture, that I had to abandon all the usual sightseeing we used to do together.” This letter, found in the Smithsonian Institution Archives, was addressed to Mary Gibson, curator, and continued on with Sarah’s usual detailed instructions on Museum activity.

Before the Hewitt home at 9 Lexington Avenue was demolished in 1939, journalist Geoffrey T. Hellman wrote an article about his visit to the house, where he found in the trunk room an oddly shaped trunk labeled “S.C.Hewitt, New York.” It was explained to him that this was for Miss Sally’s wheelchair, which she always took with her when traveling abroad. As “A Reporter at Large” Hellman wrote about what he was told, in the New Yorker, October 29, 1938.

Miss Hewitt always traveled with a manservant, registering at hotels as “Miss Sarah
Cooper Hewitt and Manservant.”  The servant hoisted her wheelchair in its trunk to
the top of a taxi whenever they went to a museum, which was practically everyday.
On arriving he would take it down and wheel Miss Sally through the galleries.

After Eleanor died, Sarah was often ill, required extra care, and died in October 1930. Her will provided gifts to seventeen people in her employ. The generous amount of $10,000 was given to William Donnelly, the butler/manservant who escorted Sarah, and most likely Eleanor, on all of their trips. Another large gift was given to Anna Engesser, in the amount of $1,000 outright and $30,000 in trust. Louis West wrote that Anna Engesser was a German girl that the sisters brought back with them one year from Europe and that she traveled with Sarah and Eleanor for years. Thus Sarah’s will solves the mystery of who were the caretakers of the sisters in their older years. Photograph of Sarah Hewitt in costume, with a white cat on her lap , ca. 1900 – 1905. Courtesy of Cooper Union Library Archive.

This picture of the sisters’s eccentricities concludes with a photograph of Sarah, found tucked into one of her scrapbooks. From the “List of the Costumes in the Sarah Cooper Hewitt Collection” (Smithsonian Institution Archives), she is wearing the “Bodice of pink brocade with laced front.” Her wig, bracelets, necklace, and brooches complete her costume, and express her devotion to another era. On her lap sits one of her deaf albino Persian cats. She adored her many horses, dogs and white cats. She used a coaching horn instead of the telephone at Ringwood, and had one of her many fine carriages driven for local travel. Sarah and Eleanor were forward thinking pioneers, and created the first museum of decorative arts and design in the United States. Eccentric? You betcha!

Little Snippets: The gardener’s son Louis West wrote that it was once said that “Nellie always made the cannonballs and Sally fired them.” Eleanor had a more demure personality, but she was a charming go-getter, “goal-oriented educator” and passionate collector. Stories about Sarah make you smile. “Miss Hewitt Takes a Whole Traffic Squad” read the headline on April 22, 1911, in The Evening World. This story concerned Sarah trying to cross a street to get to the Cooper Union in “her carriage, drawn by two black horses, with two very stiff men in the box.” An altercation occurred with the traffic policemen and strong words were exchanged. The article continued, “It would take an expert stenographer to take down half of what Miss Hewitt said.” The very long article ended on good note, and of course Sarah made her appointment at the Museum. As you know, Sarah was an accomplished musician who played first violin in the Ladies’ Amateur Orchestra in the 1880s (Meet the Hewitts: Part Four). You can imagine how she enjoyed playing different tunes on her coaching horn to announce to her coachmen which of Ringwood’s many coaches should be brought to her door. Each carriage had its own tune. In her later years, she used the horn to summon her maid.

Hewitt, Eleanor G. The Making of a Modern Museum, 1919.  Online at http://archive.org/details/makingofmodernmu00hewi.

Coming up:  Making of a Modern Museum.  The Hewitt Sisters’ accomplishment and legacy.