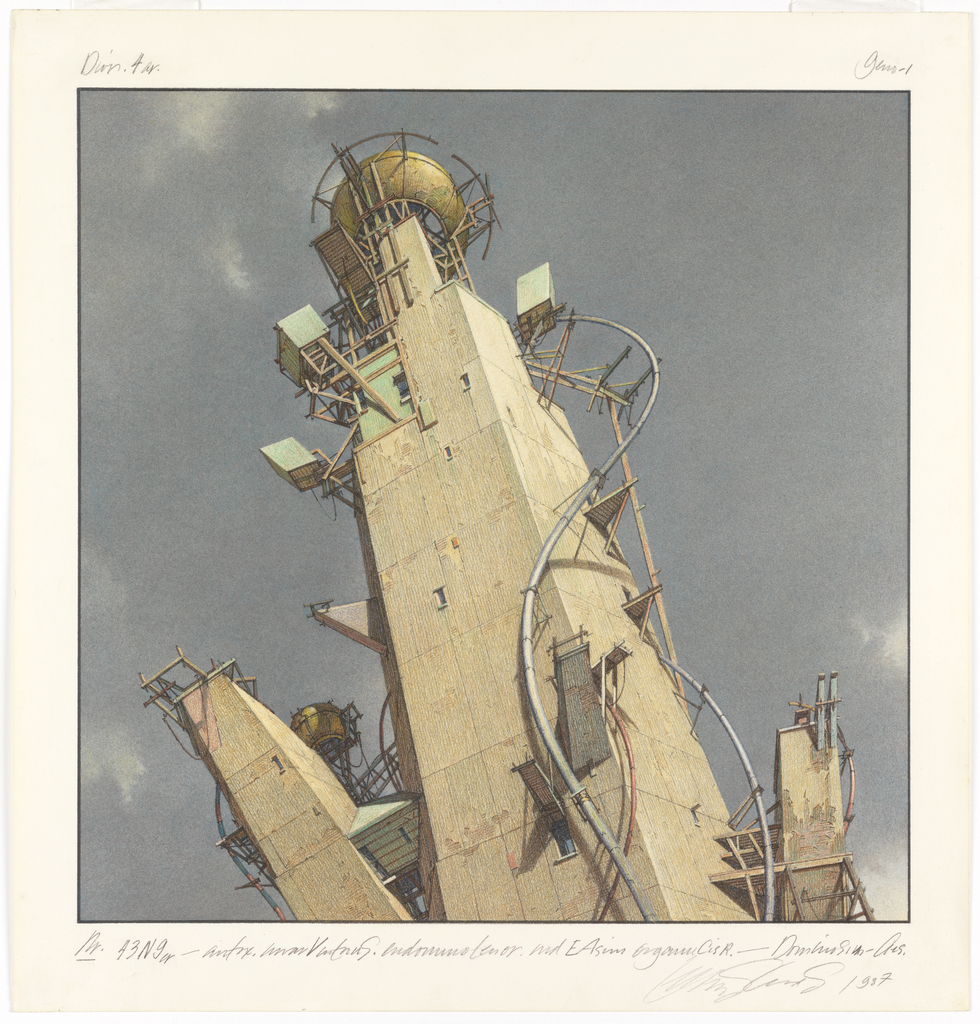 After a week of nature rendering havoc on the northeastern coast of the United States, and televised images of death, drowning, and destruction, it is interesting to consider the work of the experimental architect, Lebbeus Woods, who died on October 30, 2012. Woods was a visionary for whom destruction and reconstruction were two poles of human existence. He demonstrated his world view in an exquisitely rendered drawing, Geomechanical Tower, one of two works in Cooper-Hewitt’s collection from the 1987 Centricity series. The drawing shows a worm’s eye exterior view of a tri-part mechanical tower topped with what looks like observatory machinery and various lights/viewing equipment/viewing stands sprouting from the sides and twisting pipes running vertically along the exterior.

In a 1992 letter to Cooper-Hewitt, Woods described the Centricity series as “a hypothetical city, neither in the desert nor in existing cities, but rather referring to both. It posits an Old Order, Euclidian, mechanical and deterministic, against a New Order, non-linear, cybernetic and probabilistic. Further, it places the traditional role of architecture as the monumentalizing of a fixed social and political order against a newer role of architecture as instrument of ever-changing knowledge, therefore of a fluid social and political condition, something unpredictable, if not indeterminate. This project of mine is often seen as apocalyptic, if for no other reason than the evidence of decay and kind of Existential darkness. I won’t deny these aspects per se, but would rather emphasize the idea of a continual transformation of urban life, which necessarily involves growth and decay, destruction as well as construction.”

Woods belonged to a small group of architects, which included Peter Eisenman, and Daniel Liebeskind, who were active in the 1980s and 1990s who questioned the relevance of the utopian modernist architecture in the late 20th century. Woods differed from his colleagues, however, in that—with one exception—his buildings were never constructed.

In his celebrated and prescient drawing, Lower Manhattan (1999), which has particular resonance for the city’s post-storm condition, Woods conceives of Manhattan Island with dams used to contain the Hudson and East rivers, producing a massive gorge with the island atop its exposed granite foundation and an underworld below. Woods referred to this drawing and said that his was not a futuristic vision of apocalyptic destruction but the conception of new ways of inhabiting the Earth, closer to its planetary reality.

← What’s popular in a museum collection after a user interface change?
Arabic Design Influence on the Island of Sicily →