A New Way With Color 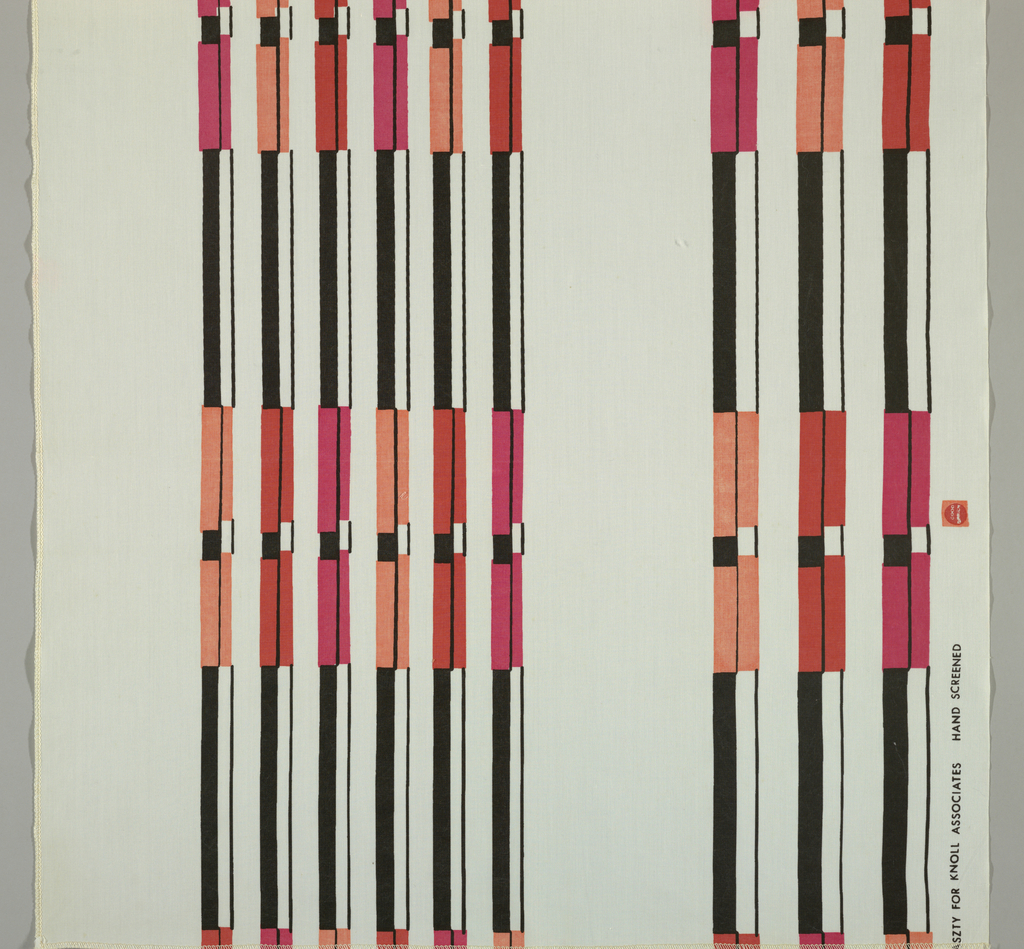 In 2011, Knoll won a National Design Award for Corporate and Institutional Achievement. The company, known for fostering many talented international designers over the decades, is represented by more than 170 objects in Cooper Hewitt’s permanent collection.

In the same year as Knoll’s National Design Award, Cooper Hewitt received a generous gift of Knoll textiles including two colorways of Eszter Haraszty’s printed textile Triad, first introduced in 1954. This seemingly straightforward fabric was a prize-winning one for Haraszty and Knoll, taking an award for printed textiles at the 1955 Home Furnishing Design Competition sponsored by the American Institute of Decorators (AID). Her bold and unconventional use of color differentiated her from her contemporaries in the field. This example of Triad has narrow black and white vertical bands interrupted by rectangles of orange and deep pink, an unusual color combination for the period, but one that has endured the test of time. A photograph in the New York Times showed a length Triad draped over Florence Knoll’s round teak table with chrome-finished steel legs. [1]

Haraszty, a Hungarian immigrant, arrived in New York City in 1947. A graduate of the University of Fine Arts in Budapest, Haraszty began her career in costume and stage design. It was during her 1946 visit to the United States that the Communists seized power in Soviet-occupied Hungary, and Haraszty decided not to return. She was fortunate to live briefly with another Hungarian émigré, Marcel Breuer, and his wife Constance in Connecticut. It was through this advantageous connection that she met the Knolls and pivoted to textile design for interiors. After her death in 1994, friend Peter Blake recalled Hans Knoll’s response to Haraszty’s vision of modern design, and how he trusted her instincts even when Knoll’s salespeople weren’t convinced:

“Don’t listen to those salesmen,” he told her. “Do what you think you should do. I’ll take care of them, and of selling the fabric.”

He also encouraged her participation in other aspects of Knoll’s business such as advertising, graphics, showroom and corporate office design. While most well-known for her work with Knoll from the late 1940s until 1955, she always kept her own studio at home, and continued consulting for clients engaged in design for interiors, textiles and fashion. She later published books on embroidery techniques.