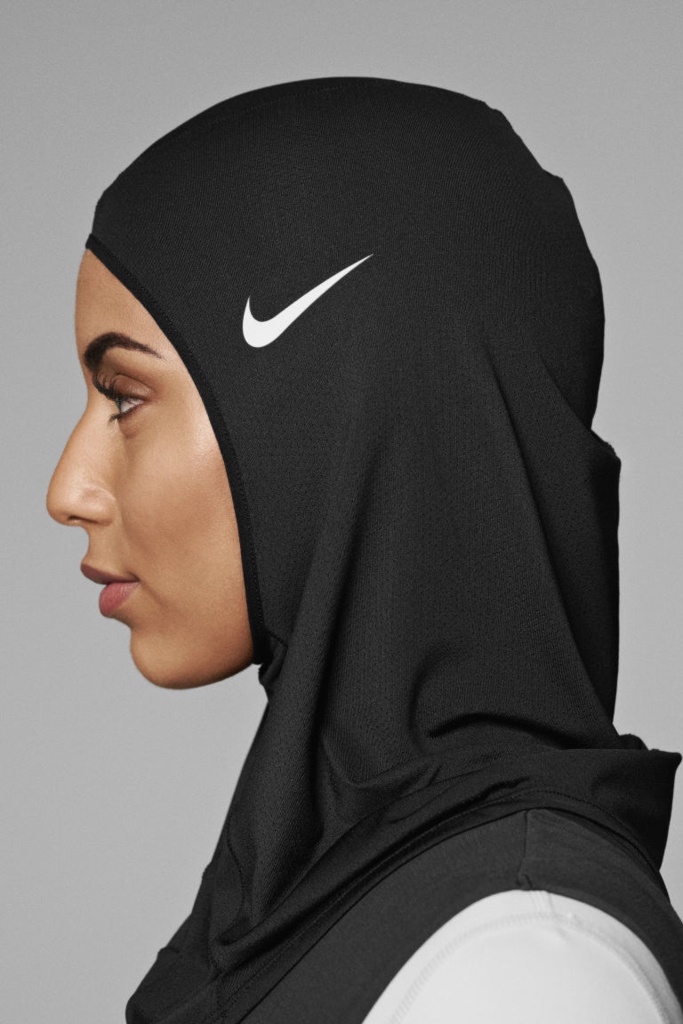 Posted by Kimberly Randall on September 21, 2020

September is New York Textile Month, a citywide celebration of textile creativity. As in past years, the museum is collaborating with the Textile Society of America. A non-profit professional organization of scholars, educators, and artists in the field of textiles, TSA provides an international forum for the exchange and dissemination of information about textiles worldwide. Four former presidents of TSA will author Object of the Week posts this month.

The Nike Pro Hijab combines two global symbols that, until recently, have too seldom been seen together. This distinctive black hijab proclaims and celebrates a woman’s Muslim identity, a beloved symbol of participation in a global community of faith, while the Nike swoosh suggests individual achievement and positions the wearer in a loose international and multi-cultural fellowship of athletes.

In some parts of the world, Muslim women have been discouraged from participating in sports due to lack of appropriate spaces or apparel. At the same time, the rigorous dress requirements of certain US and European sports associations have sometimes excluded athletes whose cultural beliefs and practices forbid or discourage adhering to those standards.

Athletic clothing is designed to enhance an individual’s performance. Until recently many Muslim women’s chosen dress, to the contrary, was inhibiting. Ibtihaj Muhammad, a champion fencer from New Jersey and Olympic medalist, has said that she was carded many times for not following instructions from a referee because she hadn’t heard him. Heavy with sweat, her hijab affected her hearing. [1] After working with a number of Muslim women athletes and discarding many prototypes, Nike launched the Pro Hijab on December 1, 2017. The fabric, a mesh structure of polyester and spandex, was designed to be light, strong, cool and flexible. The shaped construction was devised to fit snugly but allow maximum flexibility.

The Nike Pro Hijab, worn here by Ibtihaj Muhammad, is elegant, functional, and priced for a mass market. The attention Nike’s team of innovators focused on its creation both acknowledges and celebrates the emergence of Muslim women athletes onto the world stage and recognizes a growing market for Muslim girls’ and women’s athletic gear.

Dr. Mary M Dusenbury is an affiliate research curator at the Spencer Museum of Art at the University of Kansas. Her research focuses on East Asian, Central Asian, and Silk Road textiles.