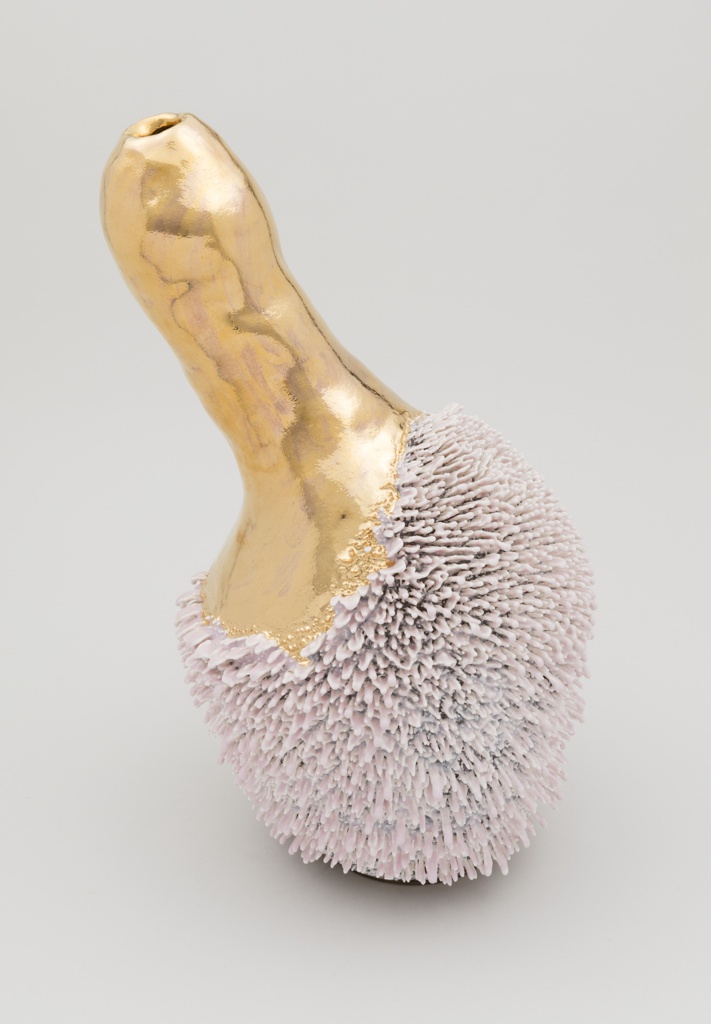 Nature has a way of informing us—however we engage, we learn from its resilient processes. Nature also has a way of amusing, perplexing and delighting us with its complex and idiosyncratic forms. This edifying and fascinated relationship drives the splendor behind the Haas Brothers’ Turgid Dong Accretion Vase.

The vase is part of the Los Angeles–based twin brothers’ (Nikolai and Simon) Accretion series, a range of ceramic vessels they started in 2013. As they state, “We are inspired by natural processes; not copying natural forms necessarily, but trying to understand the reasons why things form.”[1] Each Accretion vessel’s organic shape is achieved by coiling rolled clay. The resulting form is then massaged until its clay wall becomes smooth, creating the basic surface on which the delicate, spiky petals can begin to take shape. Experimenting with slip (a liquid mixture of water and clay), Simon recalls the development of the technique: “If I brush this [slip] forever, it’s gonna do something—I know that it will self-organize. The clay will pack somehow. But I didn’t know what it was going to look like.”[2] Obsessed with the natural self-organization of the material, Haas continued meticulously brushing the slip onto the clay body. When built up through thousands of brush strokes, the fragile, fur-like petals formed. (See the creation of one of Turgid Dong’s siblings here.)

While the slow process of building the surface texture takes imagination, dedication, and possibly a chiropractor, the resulting vessels are certainly not without additional provocation (a prominent feature of Turgid Dong). The Brothers’ work typically takes organic shape, often the shape of human body parts—from ambiguously anthropomorphic to quite identifiable. Influenced by cartoons, but certainly pushing beyond what might be considered Seussian or “Pixarian,” the objects emote personality and connection. “We are also very interested in making forms that are relatable—we strive to make people feel empathy for objects.”[3] This playful irreverence, while amusing, intentionally challenges the hierarchical relationship between the piece and the viewer: “You laugh immediately . . . And then you’re already in a different headspace and you approach the piece from a different spot.”[4]

The generation of the Accretion series from which this vase descends was presented in 2014 in the Haas’s Cool World exhibition at the New York gallery R & Company. The vessels were displayed adjacent to the Haas’s installation “Advocates for the Sexual Outsider,” an immersive enclosure of interactive sculptures that confronted the participants’ notions of provocation and intimacy—“we invite everyone to explore their personal sexual definition without the burden of social expectation.”[5] The installation, alongside the Accretion series, encapsulates the celebration of natural and human experiences highlighted—however surreally—in the Haas’s work.

← “To banish Slav’ry’s Bonds from Freedom’s Plains”
Recapping the view from inside - Pandemic as Portal: Exploring the in-between →