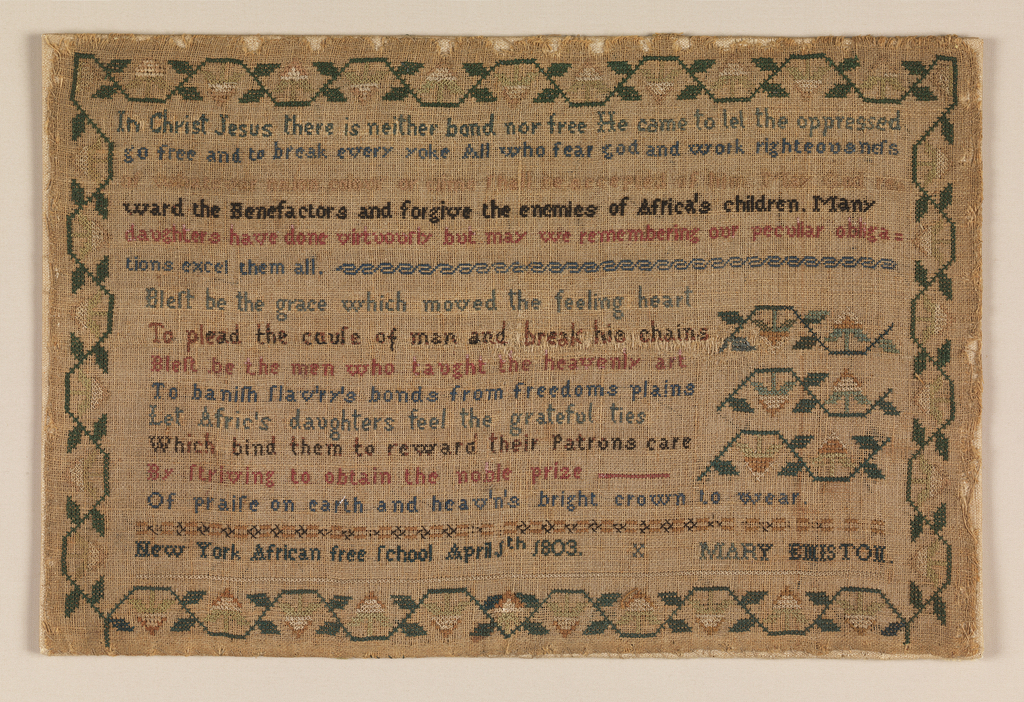 On June 19, 1865, Union troops arrived in Galveston Bay, Texas, with the news that the more than 250,000 enslaved black people in the state were free by executive decree. This day came to be known as “Juneteenth” by the newly freed people in Texas. In recognition of Juneteenth, we are sharing this post originally published on June 19, 2013.

Today is Emancipation Day, a holiday on which we commemorate the abolition of slavery in the United States. On June 19, 1865, Major-General Gordon Granger—who had arrived in Galveston, Texas, the preceding day with 2,000 Union troops—announced the end of the Civil War and the emancipation of all enslaved people. On this day, a fitting object for contemplation is a sampler made in 1803 by Mary Emiston, a student at the African Free School in New York City. Mary ornamented her sampler with an inspirational verse calling for an end to slavery and oppression:

In Christ Jesus there is neither bond nor free that He came to let the oppressed / go free and to break every yoke All who fear god and work righteousness / of whatever na[t]ion color or clime shall be accepted of him May God re- / ward the Benefactors and forgive the enemies of Africa’s children. Many / daughters have done virtuously but may we remembering our peculiar oblige- / tions excel them all. / Blest be the grace which moved the feeling heart / To plead the cause of man and break his chains / Blest be the men who taught the heavenly art / To banish slav’ry’s bonds from freedoms plains / Let Afric[a]’s daughters feel the grateful ties / Which bind them to reward their Patrons care / By striving to obtain the noble prize / Of praise on earth and heav’n’s bright crown to wear

Although slavery was still very much a reality of life in New York when Mary worked her sampler, it was on the decline. The first of New York’s Gradual Emancipation Laws was passed in 1799, granting freedom to enslaved children who were born after July 4, 1799, but requiring them to work until adulthood for the people to whom their mothers were enslaved. The mission of the African Free School—founded in 1787 by the New York Manumission Society—was to educate African American children and prepare them for freedom. It began as a single room for about forty students, many of whom were children of enslaved people. By the time the African Free School was absorbed into the New York public school system in 1835, it had educated thousands of African American children in reading, writing, arithmetic, and geography. Boys were also taught astronomy, a necessary skill for seamen, and girls were trained in domestic skills such as sewing.

In 1791, the African Free School hired a female teacher to teach needlework to its female students. It was one of only a small number of institutions that taught African American girls decorative needlework, so samplers by African American schoolgirls are rare. The large majority of surviving examples were created in Baltimore schools run by the Oblate Sisters, an order of Roman Catholic women of African descent. Mary’s sampler is remarkable in that it precedes the other known works by over twenty-five years. Although no details about her parentage or history have yet come to light, Mary lives on through her noble message of hope and freedom.

Jennifer N. Johnson holds a degree from the Parsons/Cooper-Hewitt Master’s Program in the History of Decorative Arts and Design. While pursuing her studies, she completed a two-year fellowship researching the Cooper-Hewitt’s American sampler collection.

I am a cross stitcher; not an expert one at that. I purchased the first known sampler when it was recently reproduced. Curious since you have a Sampler expert on hand, if this Sampler will ever be reproduced for purchase by Sampler lovers such as myself.
I thank you for a reply if this is ever available as a Reproduction Sampler.
Thank you very much. Thank you too just for the honor of just being able to view this amazing, historic sampler.