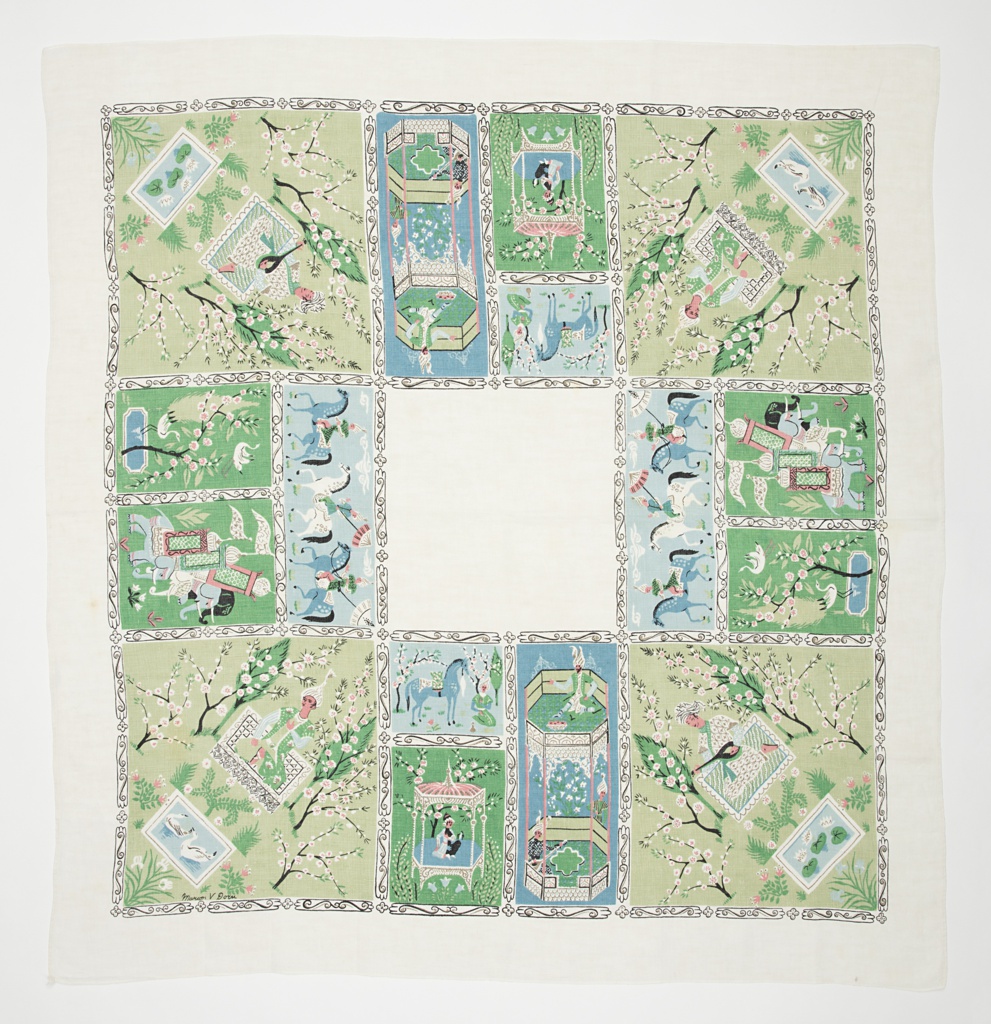 This colorful tablecloth was designed by Marion Dorn Kauffer, an accomplished twentieth-century designer primarily known for her textiles and carpets. Designing across different media, she also created wallpapers, illustrations, and graphics. The printed pattern that decorates this tablecloth features a series of square and rectangular vignettes inspired by Mughal painted miniatures from India. The vignettes include sketch-like images of: a seated musician playing a sitar amongst flowering trees; three royal figures on horseback, two of whom hold parasols; figures seated in garden pavilions; and royal elephants bearing elaborate howdahs, the ornate covered pavilions used for the hunt or ceremonial processions. Kauffer rendered the scenes in a lighthearted, whimsical manner.

The tablecloth was manufactured by the American firm, Leacock Quality Hand Prints. The pattern is called Omar Khayyam, named after the Persian mathematician, astronomer, philosopher, and poet who lived from 1048-1131. Omar Khayyam is best known in the West as the putative author of a collection of Persian poems. In 1859, British author, Edward FitzGerald translated the poems into English, entitling the collection: The Rubáiyát of Omar Khayyám. By the early twentieth century, The Rubáiyát was one of the most widely read collections of poems in the United States. In the 1950s, when this tablecloth was made, the The Rubáiyát experienced a wave of renewed popularity, especially with college students. Leacock offered the Omar Khayyam tablecloth in at least two colorways. Another Kauffer tablecloth for Leacock, called Mikado, showed two Japanese figures in a landscape of flowering trees and mountains.

Book illustrations from Kauffer’s early career display the quality of her draftsmanship, and even her later work for commercial manufacturers, such as this tablecloth, shows the vitality of her hand. In 1923, she moved to London, living with American graphic designer Edward McKnight Kauffer, whom she later married. She made her reputation in England as a designer of textiles and carpets. In 1940, with the outbreak of the Second World War, the couple returned to the United States, where Marion Dorn Kauffer successfully restarted her career. Over the following two decades, she spiritedly embraced the commercial challenges and opportunities that post-war America presented to hard-working designers.

6 thoughts on “A Poetic Tablecloth”

Any indication of what, if anything, was in the empty central square?

probably the food or a vase of flowers? this woman thought of everything!

Kimberly, do you have access to her addressbooks etc for NYC during the war? I am curious whether she designed for a tile decorating studio who hired artists displaced to NYC by the war. I have some evidence that Ruth Reeves designed for them, Designed Tiles, but Dorn has remained elusive.
Vicki

Marion Dorn was marrried to the artist Henry Varnum Poor from 1919-23. Ruth Reeves was Poor’s next-door neighbor in Rockland County. So a connection between the two designers is plausible.

Dorn and Reeves did know each other and they travelled to Paris together, there is a group photo in the Archives of American Art that includes them both. You can read more in my book ‘The Architect of Floors:modernims, art and Marion Dorn designs’. Christine Boydell

best love letters for him