Train History on the Wall 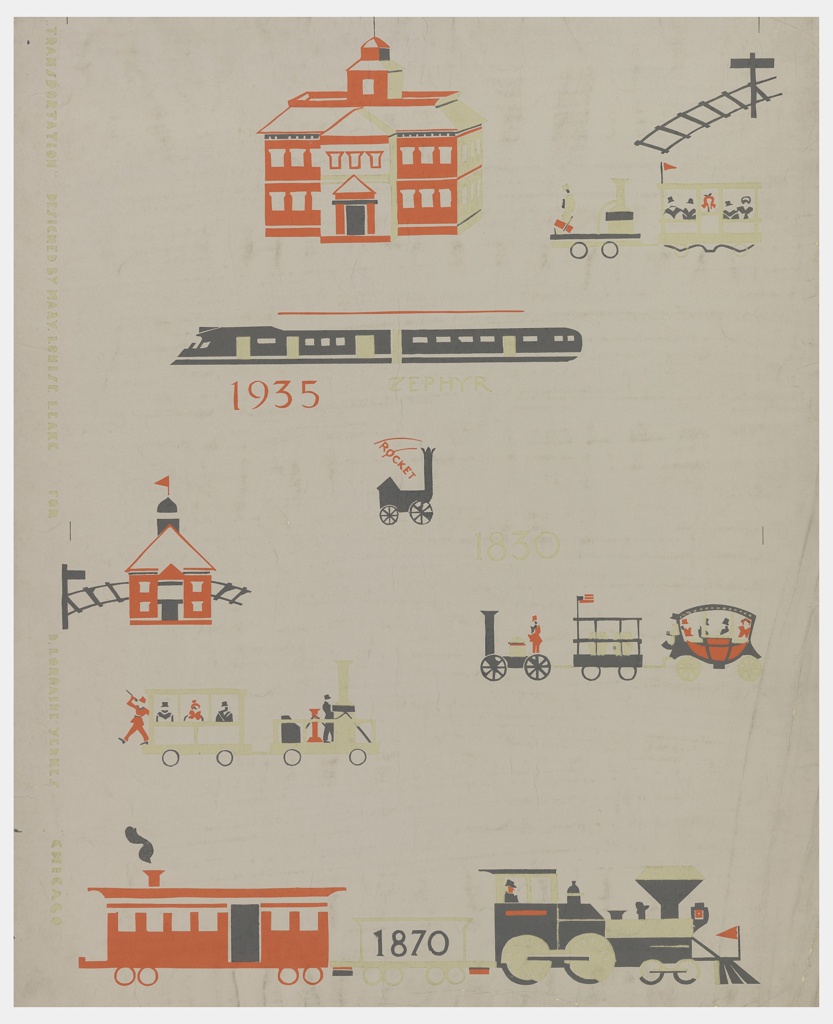 Posted by Gregory Herringshaw on March 2, 2020

Welcome to the Object of the Week blog. This March, in celebration of Women’s History Month, each Monday a new post will highlight women designers in the collection.

This wallpaper called Transportation traces the history of the railroad from 1830 to about 1938. The designer, Mary Louise Leake, was inspired to create this design after visiting the 1933 Chicago World’s Fair, with its “Wings of a Century” pageant highlighting two new streamlined trains, the M-10000 by the Union Pacific Railroad, and the Zephyr of the Chicago, Burlington and Quincy Railroad. The Zephyr had recently completed a record-breaking dawn to dusk run from Denver, Colorado, to Chicago, Illinois, in thirteen hours and five minutes. The oldest engine featured in the wallpaper is the Rocket, which won a design competition in England in 1829, and was widely regarded as the world’s first modern steam locomotive. The Rocket could reach speeds up to 60 miles per hour. In comparison, the diesel-powered Zephyr, the newest model locomotive on the wallpaper, averaged 78 miles per hour on its historic run with a maximum speed of 112.5 miles per hour.

I have been unable to find any information on Mary Louise Leake, but interior decorator Lorraine Yerkes seems to have been a more public figure. Based in Chicago, Yerkes was a member of the American Institute of Decorators, and her earliest mention was in the Chicago Daily Tribune in 1936, which noted her leasing a space with two other women decorators. By 1938, she was designing and printing wallpapers, including Transportation. In 1941, she curated an exhibition of wallpapers produced by her company, at the Art Institute of Chicago. This included her own designs along with those of seven other designers, five women among them. Transportation was one of the papers exhibited. By 1953, Yerkes had relocated herself and her decorating business to Palm Beach, Florida.

5 thoughts on “Train History on the Wall”

So sorry that this is no longer a daily post – it has been one of the highlights of my day. Just wondered if there is anything more than coincidence in the Yerkes name and the rail subject matter – see https://en.wikipedia.org/wiki/Charles_Yerkes#Death_and_legacy

Dear Mr. Clifford, there was very little information available on D. Lorraine Yerkes. Given the rather unusual last name and the fact they both had ties to Chicago does open up the possibility of some kind of family relationship. Happy to hear you are enjoying the blog posts.

D. Lorraine Yerkes was the daughter of Owen and Anna Mae Yerkes. (Read a bit more about her family at the url cited below from Geneva Illinois.)

Her brother was the architect Wallace F. Yerkes who worked with both the Grunsfelds (senior and junior) in Chicago designing homes. He graduated from the Armour Institute
with a B. S. in 1922 (before Mies was there). I have no other information on D. Lorraine Yerkes except to know that she was Wallace’s older sister (by one. year) and, from what your post reveals, Mr. Herringshaw, that she eventually moved to Florida. So I was really delighted to see your post Mr. Herringshaw to learn a little more about her and the wallpaper she designed.

What you will learn if you read the url from/or Geneva Illinois is that Lorraine and Wallace’s father was a railroad dispatcher and telephone operator /engineer for Western Union and the article at one point mentions that their mother Anna did have an interior design shop.

I agree with Mr. Clifford that Yerkes is an unusual name. I am not sure there is any relation between Lorraine and Wallace’s family to the Yerkes family of Yerkes Observatory.

My family knew Wallace and his wife who he called ‘Brownie’. He was a wonderful person: very inspiring to be around. Sadly he died when he was somewhat young: 65. I think his widow donated their estate to the Art Institute of Chicago. Until doing some research trying to discover more about Wallace, I did not know he had a sister, nor one that was a designer.