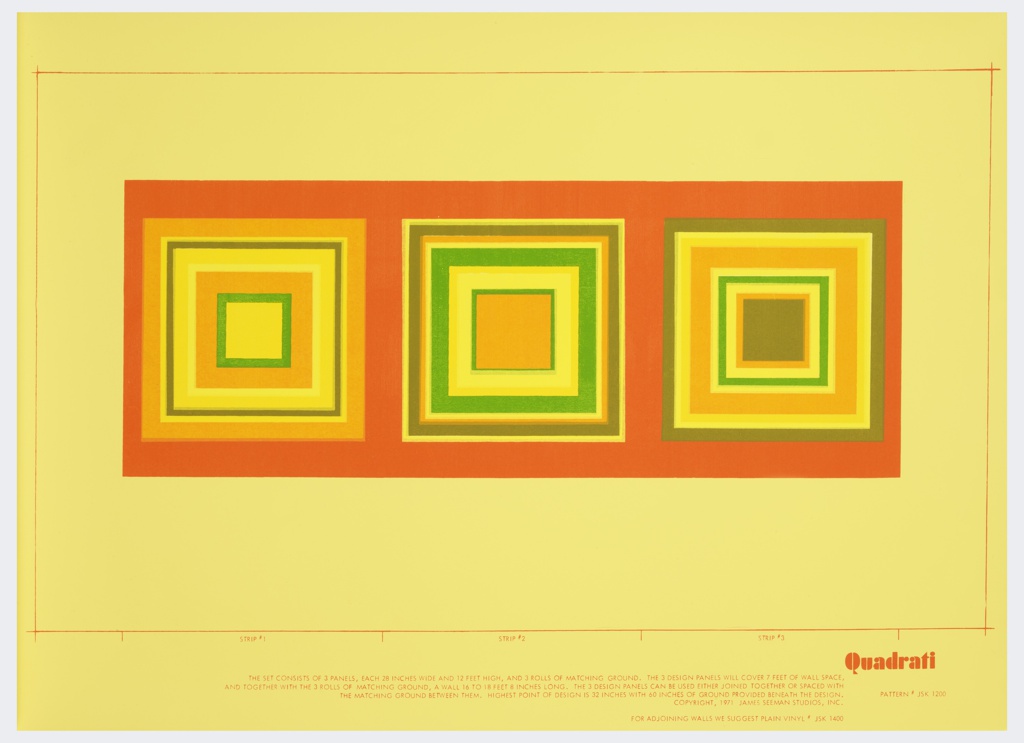 Posted by Gregory Herringshaw on February 12, 2020

A colorful design to brighten your day! Kinetics is a mural design from the Kaleidoscope collection of murals and supergraphics by James Seeman. Resembling a colorized barcode, the design may have been inspired by this emerging technology. Patented in the United States in 1951, it took about twenty years for the barcode to become commercially successful. This is one page (below) from a sample book containing fifteen different designs for murals and supergraphics, a second design is shown above, with each including pertinent information such as dimensions, pattern number, and actual colorway of the full-size mural.

The pattern is representative of early 1970s design with its bold colors and large scale. The full-size mural would cover a width of eleven and a half feet, while the ten-foot height could be trimmed to fit individual interiors. Panel five can be joined with panel one to extend the mural if one wishes to wrap the pattern around a room for a deeper immersion into color nirvana.

This collection was produced in 1971 for the 1972 year and began to rack up awards almost immediately. The Kaleidoscope collection received one of ten first-place awards given in 1972 by the Resources Council, Inc., the national association of interior furnishings manufacturers.

James Seeman was well known in the wallpaper field. Educated at the Realschule, Bundes Lehrenstalt and Academie in Vienna, and Pratt Institute in New York City, he opened his first wallpaper studio in 1946. In 1954 he was awarded the prestigious Justin P. Allman award for excellence in mural designs. He was also a devoted watercolorist which helps explain the beauty and subtle colorings of his murals.

While scenic wallpapers have been around since the early nineteenth century and were designed to envelop a room in exotic landscapes, murals were designed with the modern home in mind. Murals were less of a commitment, usually composed of fewer panels and designed to be an accent on one wall, though sometimes multiple sets could be joined together, as is the case with Kinetics. Murals gained popularity immediately after World War II and remained fashionable into the 1960s.

← Suzushi Stripe
Between Constantin and Nogales →

2 thoughts on “Show Your Stripes”

I do not know if it’s just me or if perhaps everyone else
encountering problems with your site. It appears like some of the
text on your posts are running off the screen. Can someone else please comment and let me know if this is happening to them too?
This might be a problem with my web browser because I’ve had this happen previously.
Many thanks

Since the admin of this site is working, no doubt very shortly it
will be famous, due to its quality contents.