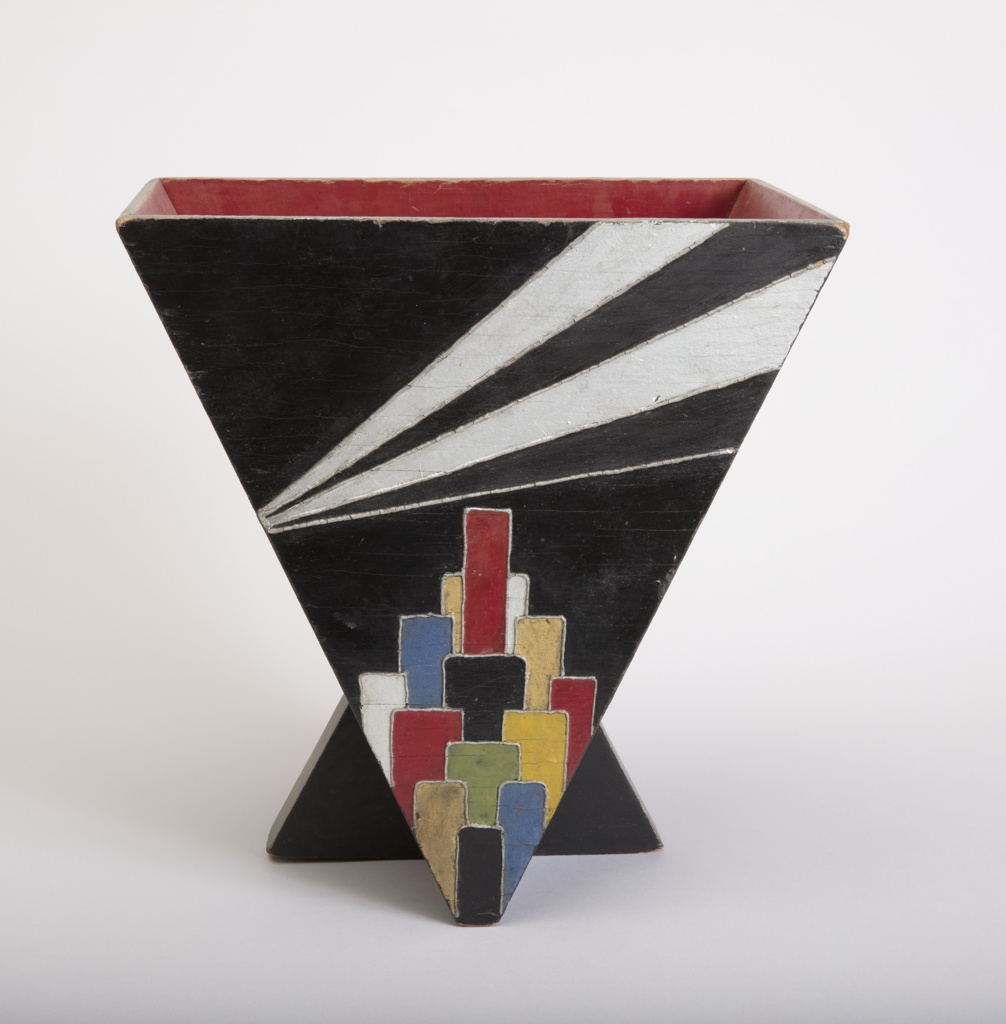 Tucked underneath a desk or in a corner of a room a wastebasket sits waiting to collect trash. While an often overlooked item of everyday life, it received the full attention of Donald Deskey. The designer, who established his career in New York in the 1920s, dedicated himself to reimagining the look of the American interior, down to the last wastebasket.

His ideas on design were profoundly informed by his encounters with contemporaneous developments in European art and design. Deskey had studied painting in Paris and, in 1925, visited the International Exhibition of Modern Decorative and Industrial Arts. Upon his return to New York in 1926, Deskey began incorporating modern materials and forms derived from avant-garde artists into his designs.[1] With this wastebasket, for example, Deskey rethought the purely utilitarian form of the typically cylindrical trash receptacle. Teetering on an edge, this inverted, wedge-shaped bin is supported by two triangular props on each side. The seemingly precarious balancing act gives an otherwise inert object a decidedly modern dynamic tension.

In addition, Deskey decorated the wastebasket in lacquer and silver leaf. The designs on the two sides of the bin are different. On one, he applied a series of stepped rectangular forms underneath three diagonal beams of silver. The shapes mimic the emerging New York skyline of modern recessed skyscrapers.[2] On the other side, a dramatic silver swirl emerges from a stack of semicircles, recalling the work of the Italian Futurists. Wastebasket, view of other side A photograph in the Donald Deskey Archive illuminates the importance of the designer’s application of painted forms. The image depicts a model interior with several pieces by Deskey, including a screen and wastebasket similar to the one discussed here decorated with abstract compositions. This decorative use of paint enabled Deskey to connect and integrate different objects and pieces of furniture throughout a space. From screen to wastebasket, all the elements of the interior play an important role in communicating a sense of a modern America.

← Dig that Paper!
On a Hot Summer’s Night….Icy Cold Silver →