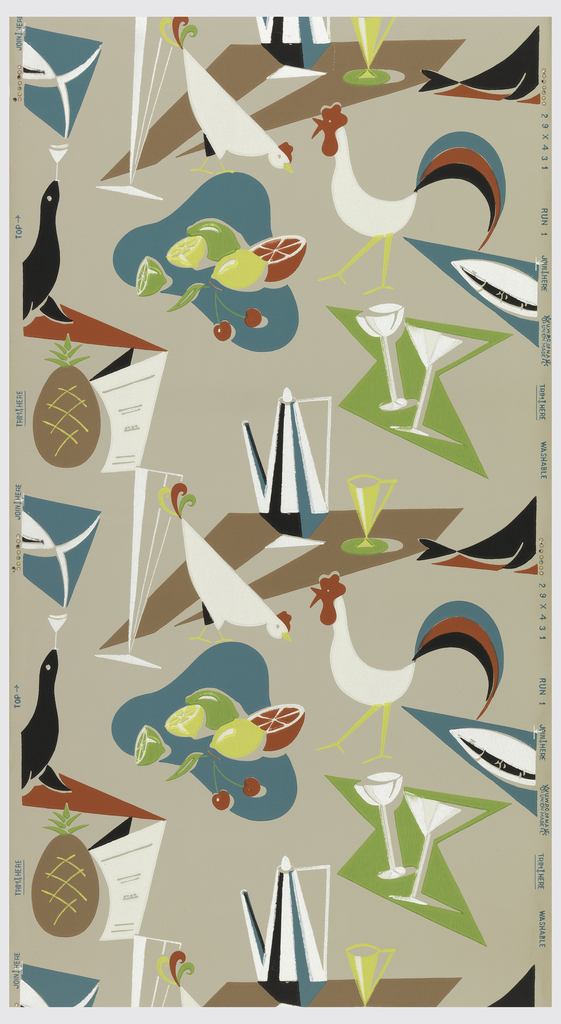 Posted by Gregory Herringshaw on January 15, 2020

This pop-culture inspired cocktail paper from the post-World War II era immediately evokes images of the model 1950s suburban home. Its imagery—mostly items used within the kitchen like fruits, coffee, cocktail drinks, and even poultry—reference a variety of trends in 1950s America. The chickens and roosters are representative of fertile animals, a popular theme in a post-World War II America that was trying to recover its population. The cocktails and fruits are reference to the popular cocktail culture of the era; this was the time of the cocktail dress and the invention of the tiki drink, imagined through the citrus fruits, cherries, and the pineapple. These seemingly unrelated images come together to send a message of frivolity and prosperity in a new age.

Wallpaper was prevalent within home design in the 1950s, and especially in kitchen design. The boom of suburban American neighborhoods resulted in a series of homes that were similarly designed and constructed. These cookie-cutter homes created a blank slate for the growing middle class to decorate their homes to their specific aesthetic. The modern suburban home owner could liven up their house with a bright color palate, modern furniture, and an interesting new wallpaper, like this one.

Anne Regan is a graduate student in the History of Design and Curatorial Studies Masters program offered jointly by the Cooper Hewitt, Smithsonian Design Museum and Parsons School of Design. While attending school she is a practicing commercial interior designer.

3 thoughts on “Dig that Paper!”

Dear Victoria, this kitchen/cocktail paper does not have a known title, designer, or manufacturer. Sidewall is the trade name used to categorize this wallpaper, to distinguish it from a border or ceiling paper for instance.

Studios began screen-printing wallpapers around 1938. This was quickly disrupted by the war effort, which placed a moratorium on new designs. So new collections of screenprinted wallpapers did not emerge until 1946. As screenprinting was all done by hand at this time, papers printed with this technique were more expensive than the cheaper machine-prints.

What a great design! Although I think that it is more likely that the chickens are a direct reference to the ‘cock’s tail’ (images of cocks on drink glasses has been popular at least since the 1920s) just as the seal is another popular animal associated with cocktails at the time– associating it with fertility in this context seems a bit of stretch.