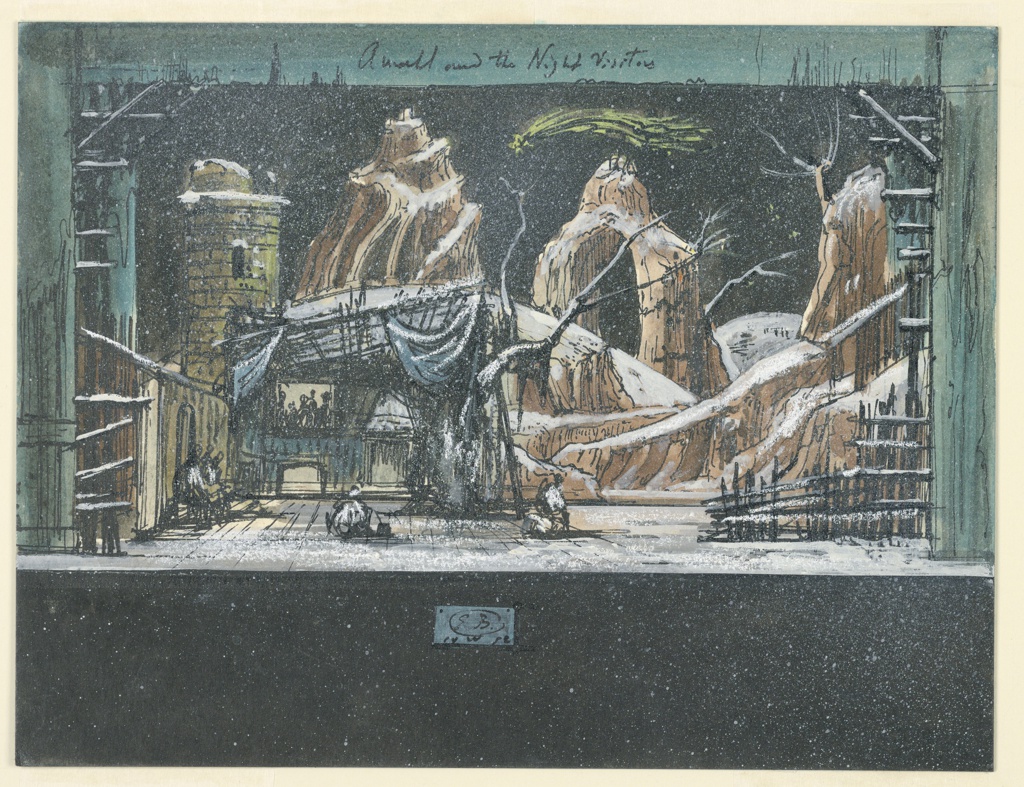 Amahl and the Night Visitors was the original Hallmark Christmas movie. The one-act opera by Gian Carlo Menotti was the first opera composed for television in the United States. Commissioned by NBC, it was first performed on Christmas Eve in 1951 from a studio in Rockefeller Center. Sponsored by Hallmark, it was also the debut production for the Hallmark Hall of Fame and became the first network television Christmas special to become an annual tradition.  NBC presented it annually with many of the same singers and production staff until 1966.[1]

The story centers on a boy named Amahl and his mother, who offer food and shelter to the Three Kings on their way to Bethlehem. Having no gift to send, Amahl offers his crutch for the newborn child and is then miraculously healed.  Menotti said that the idea for the opera came to him while walking around the Metropolitan Museum of Art in New York.  He saw Hieronymus Bosch’s The Adoration of the Magi, and remembered his own childhood in Italy.  There, gifts were brought to children by the Three Kings, rather than Santa Claus.

Eugene Berman designed the set for the original televised opera, though production difficulties made it difficult to see his work.  This set design—with a large star in the sky and snow gently falling on an otherworldly landscape—was likely for a staging at the New York City Opera the following spring.[2]

Born in St. Petersburg, Russia, Berman lived in Paris and made frequent trips to Italy before moving to the United States in the mid-1930s. A surrealist painter, Berman also gained renown as a set designer, working in both New York and Los Angeles. In 1950, he married actress Ona Munson—best-remembered for her role in Gone with the Wind—in Igor Stravinsky’s living room in Hollywood.  The collection at Cooper Hewitt also includes several of Berman’s stage designs for a 1957 production of Don Giovanni. [3]

[1] Amahl and the Night Visitors was revived in 1978 with a version that premiered on NBC. Learn more about the original 1951 production through The Paley Center for Media’s website.

[2] The Morgan Library & Museum has a related set design for the April 1952 production.

One thought on “Night Visitors”

Thank you for this timely, historical, very interesting post. Thank you for your work for all Americans, and people around the world.