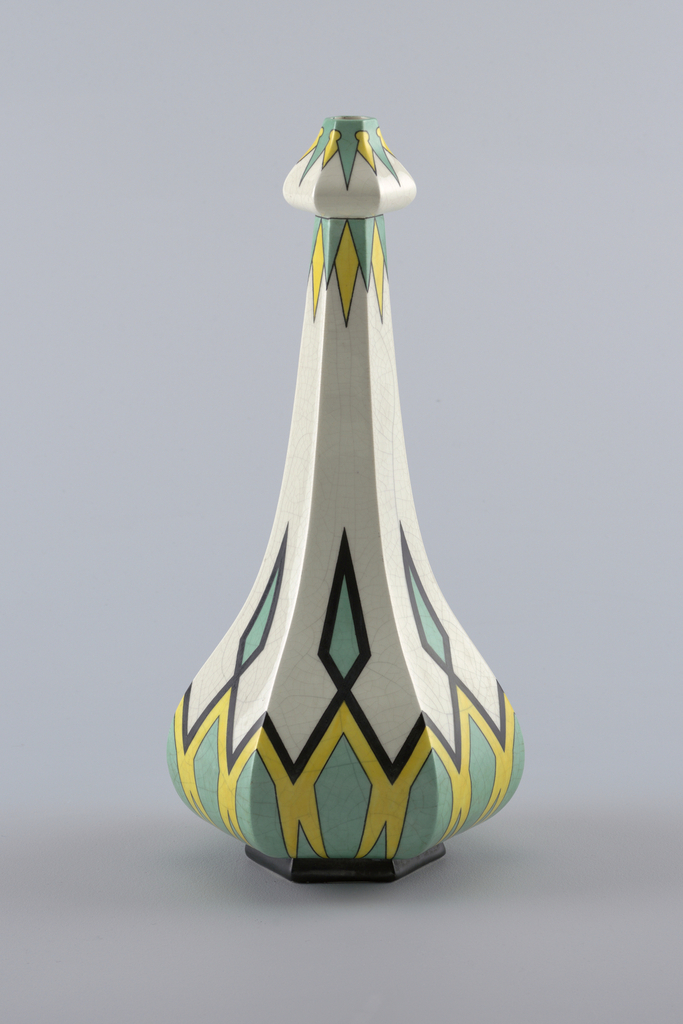 The remarkably graphic, geometric pattern of bright yellow and sea-green crystalline forms that map the surface of this elongated, arrow-like vase appear definitively modern. The origin of this decoration, though, is decidedly not. This vase was made by Arabia, the principal industrial pottery in Finland during the opening decade and a half of the twentieth century. [1] It belonged to the firm’s iconic Fennia series, for which traditional Finnish vernacular design—particularly from Karelia in eastern Finland—was used as a source for the decoration.

At the end of the nineteenth century, Finland—then a part of the Russian Empire—witnessed a fervent nationalist movement. This project to define a national, Finnish identity led to the reexamination and publication of cultural myths distinct to the Finnish people, such as the epic narrative poem, The Kalevala. The poem spurred archaeological research and popular interest in the history of Karelia, the region from which much of The Kalevala was sourced. In the area of design, the ethnographer, Theodor Schvindt (1851–1917), collected and published a survey of traditional Finnish ornament from the region in 1894. The book served as an important guide for a generation of designers who were swept up by the trend­.[2]

Interestingly, this vase, and the Fennia series to which it belonged, was designed and manufactured not for a Finnish market, but for export to the United States. In 1900, an American importer contracted Arabia to commission a collection of distinctly Finnish ceramics.[3] The Fennia ceramics functioned as an important cultural tool in defining Finnish culture abroad. As a result, this vase—with its combination of modern and traditional forms—demonstrates how the construction of a national identity was not a process that occurred just from within, but from without.

Devon Zimmerman is a  graduate curatorial research fellow in the Product Design and Decorative Arts Department at Cooper Hewitt, Smithsonian Design Museum and a PhD candidate at the University of Maryland, College Park.

← Dining with the Poppies
The Complexities of Cross Looping →