Dining with the Poppies 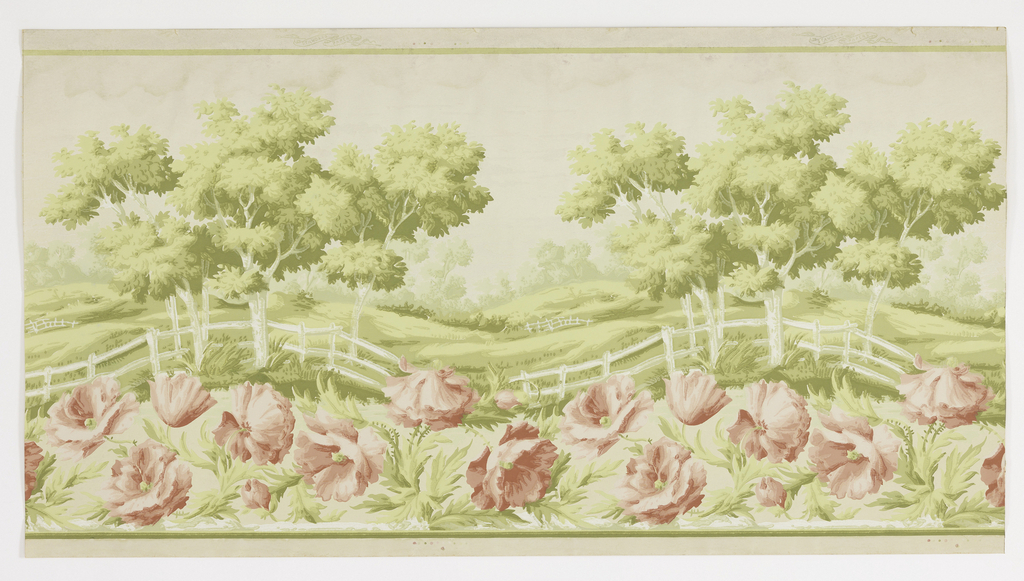 Posted by Gregory Herringshaw on November 26, 2019

This is a fun frieze, also known as a wide border, produced in America during the early years of the twentieth century. It captures a bucolic scene of rolling hills, white picket fences, and fields of red poppies. I almost expect to see horses trotting by, or cows grazing. The design has a deep perspective with another row of fencing in the distance, along with more rolling hills and a denser growth of trees. The sky is rather an odd color. This was produced as an inexpensive wallpaper, and as such, was only given a thin application of ground color. As the paper aged, it started turning brown, which is now showing through the ground color. Incidentally, the sky is probably printed an off-white rather than blue so it would match the ceiling paper. These wide friezes were popular in America from about 1895 until 1915 or so. Landscape designs were a great tool for visually enlarging a room, and there were enough varieties and colorways available to appeal to any taste.

Landscape friezes were commonly used in dining rooms, hallways and libraries, and they would always be used in combination with other papers. A popular treatment in dining rooms was to hang the frieze at about eye level with another coordinating wallpaper below with a plate rail covering where the two papers met. A third wallpaper could be hung above the frieze, running up to the ceiling, or the ceiling paper could be brought down the wall to the top of the frieze.