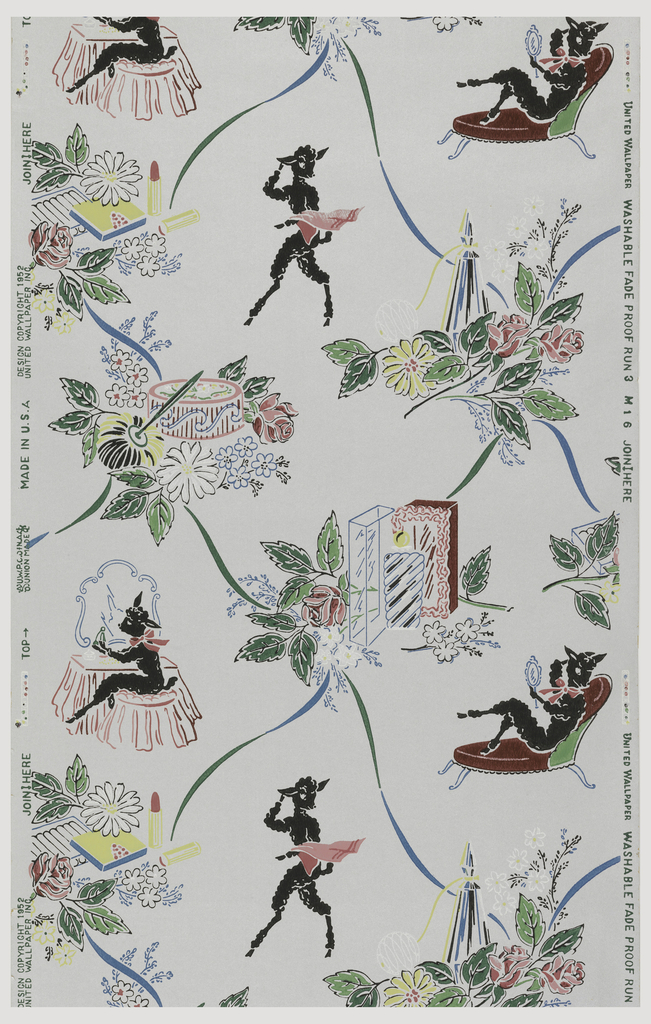 Posted by Gregory Herringshaw on November 14, 2019

I always get good feedback when I blog about poodle wallpapers from the post-war period. They seem to trigger an emotional response, and people either love them or hate them. I’ve pretty much exploited all the poodle wallpapers in the collection, but fear not, I’ve found a substitute.

This paper features a black sheep, primping and scenting, similar to French poodle personifications at the time. At first glance it even looks like a poodle, albeit with pointy ears, hooves, and a cute little button nose. The central view shows a ewe dashing off to the shower, towel in hand, while another shows her reclining in a chaise, primping with a hand mirror. A third view has her sitting at a vanity, spraying perfume. Each ewe illustration is framed by ribbons and beauty items including perfume, powder and lipstick, essentials for the modern sheep. I understand the personification of the French poodle, there’s a lot of documentation on this. During the 1930s a standard poodle began winning awards at dog shows across Europe, culminating in the Best in Show at the Westminster Dog Show in 1935. By 1960, poodles had become the most popular breed in America. Poodles also reflect the new wanderlust brought on by the transatlantic flights which began after the war, with Pan Am introducing their first transatlantic daily flights between New York and Paris in 1958. So poodles earned their spot in kitsch history!

Looking online I’m not finding similar references for sheep. Sorting through the negative connotations for black sheep, which wouldn’t earn this animal a spot in the wallpaper Hall of Fame, I did find a couple of positive references. It seems in merry olde England, country folklore sees black sheep as omens of good fortune. And while being labeled “the black sheep” is usually not good, the black sheep is seen as a catalyst for change, by exposing hidden weaknesses within a given system, and by introducing new values that can allow greater growth within that system. How that information earns the sheep a place in boudoirs and powder rooms across America is anyone’s guess.