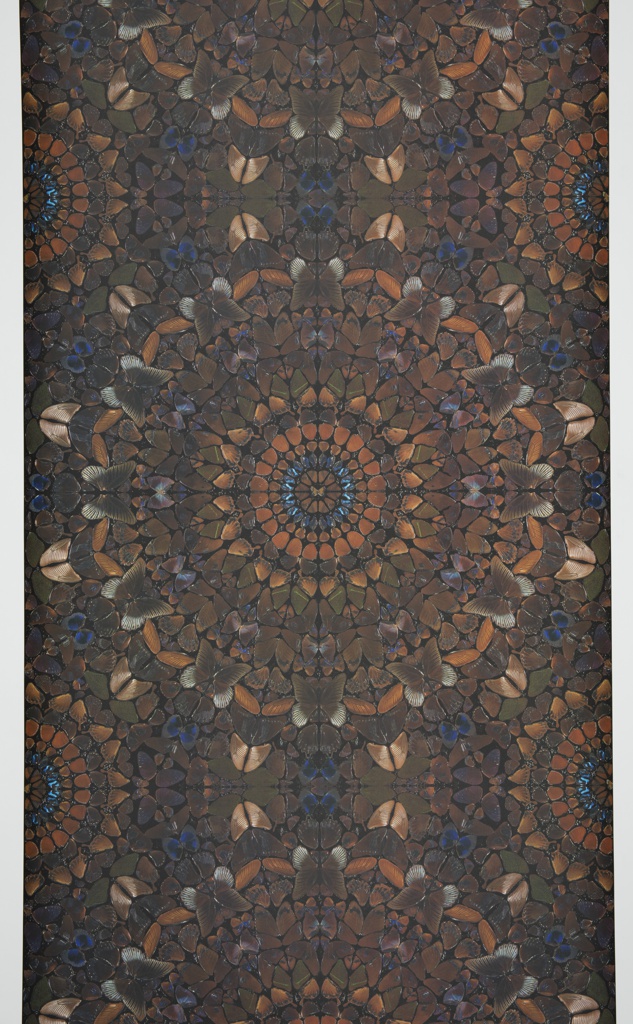 Posted by Gregory Herringshaw on November 7, 2019

Thought it was time to show another wallpaper by Damien Hirst. Like many modern and contemporary artists who turn to wallpaper design, Hirst uses his artwork or installations as inspiration. This is based on the “Kaleidoscope” paintings Hirst began creating in 2001, where butterflies, or butterfly wings, were arranged in elaborate patterns and adhered to a layer of household paint. The theme of this wallpaper is… butterflies, and lots of them. Fortunately, the design is not composed of real butterfly wings, just a photo reproduction of his artwork, which does contain the real thing.

The design starts with a nearly complete butterfly, sans body, in the center. This is surrounded by concentric circles consisting of wing pairs, with occasional compete sets of wings in the outer circles. Notice the exacting position of each of the wings, as perfectly lines can be seen radiating out from the center of the circle. This is one of Hirst’s darker wallpapers, meaning darker in color, as the majority of butterflies are in shades of brown, with the periodic iridescent blue wing thrown in the mix. The butterfly is one of Hirst’s most iconic and familiar motifs, and the Kaleidoscope paintings reference the spiritual symbolism of the butterfly, used by the Greeks to depict Psyche, the soul, and in Christian imagery to signify the resurrection. Unlike his earlier butterfly works that contained the complete insect, in the Kaleidoscope paintings Hirst used only the iridescent wings, which he felt divorced the butterfly from the real thing.

Damien Hirst is one of the best-selling contemporary artists. As he is known for creating some controversial works of art, many of which include animal specimens, his wallpapers seem rather tame in comparison.

← USSR In The Ring
Capturing a Bit of Autumn →