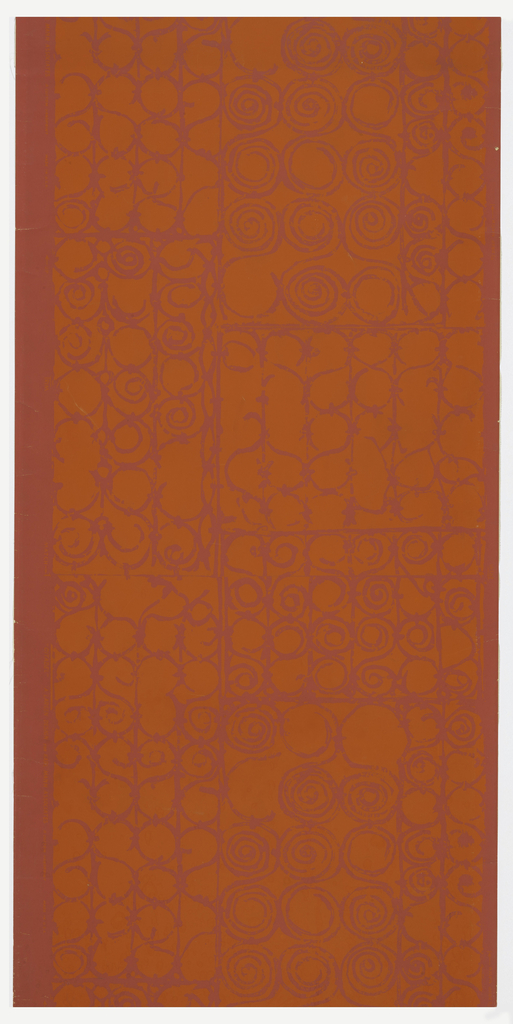 Posted by Gregory Herringshaw on October 15, 2019

Citadel is among the early wallpaper designs Jack Lenor Larsen created for Karl Mann. This is a striking, intense pattern that needs to be viewed up close or zoomed in on to get the full effect. Printed in a brilliant orange on an equally brilliant red ground, the two colors merge together when viewed from a distance. The design has the appearance of a cast-iron grill or gate, composed of circles or scrolls set within a grid framework. The pattern is aptly named as citadel is defined as a fortress used to protect inhabitants from attack. Each of the circular motifs is different, with elements twisted out of shape or missing altogether, as if the wallpaper itself has stood the test of time, protecting those within. While the reference to a citadel conjures up images of massive iron or stone structures, when printed in this monochromatic red-orange colorway the design takes on a more delicate, decorative function. If the design was printed in black on a white ground it would carry more weight visually and create a stronger connection to citadel as a measure of defense.

Larsen began weaving textiles in the late 1940s and after receiving an MFA from the Cranbrook Academy of Art in 1951 he set up a studio in New York City. The following year he founded his eponymous firm Jack Lenor Larsen, Incorporated. Larsen and Mann both had showrooms in the same building, and the two had discussed creating wallpapers to coordinate with Larsen’s textiles. While Karl Mann Associates in known for its wallpapers today, it was in fact Larsen who created the company’s first wallpaper designs. As a testament to their lasting relevance and popularity, fifteen years later all of Larsen’s original designs were still in production. Larsen seems to be ahead of the trend with the color explosion seen in this design. Designers were just starting to use intense color combinations in the early 1960s, becoming much more prevalent later in the decade.

In 2015 Jack Lenor Larsen was honored with the Director’s Award at the National Design Awards, conceived by Cooper Hewitt, Smithsonian Design Museum to honor lasting achievement in American design.

4 thoughts on “A Wallpaper Stronghold”

Dear Greg Herringshaw, Your wall paper articles are great, I read every one of them.

I cannot find a way to contact you so here is my hail mary attempt. I want very much to discuss 1940’s NYC silkscreen designers with you. I am victoriajenssen and I am on gmail.
Vicki