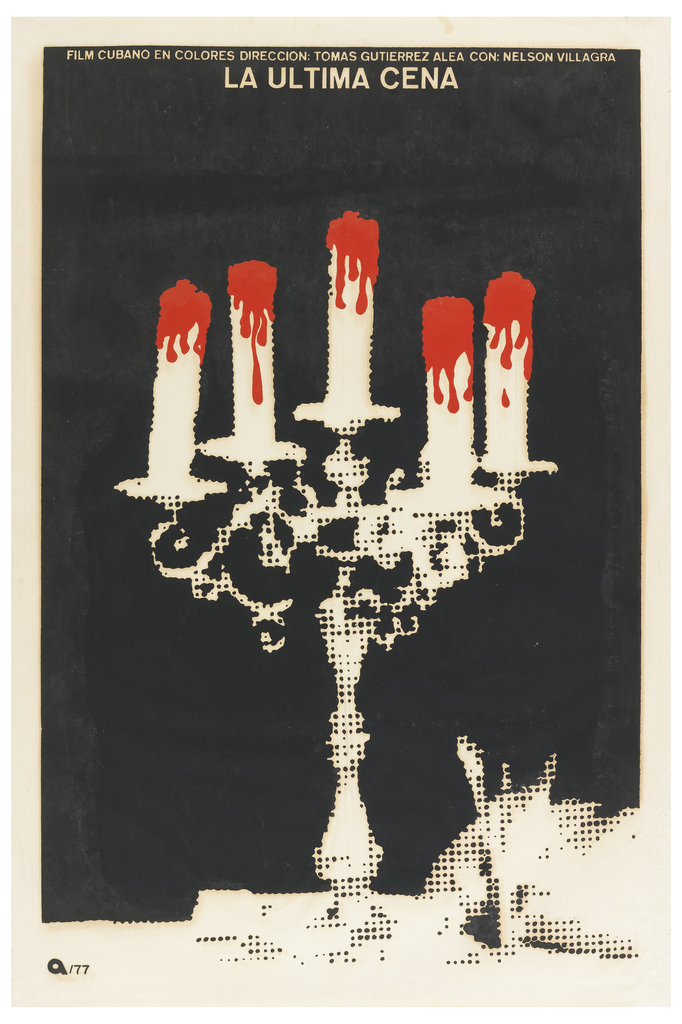 In recognition of National Hispanic Heritage Month (September 15-October 15, 2019), this week’s Object Of The Day posts celebrate Latinx designers’ works in the collection.

The Cuban Revolution of 1959 brought major changes to the country’s cultural fabric. Less than three months after the new revolutionary state came into power, the Instituto Cubano del Arte e Industria Cinematográficos (ICAIC)  was formed. Also known as the Cuban Film Institute, the ICAIC was part of an effort to educate the populace by providing access to the arts.It was founded under the belief that cinema is uniquely powerful in its ability to disseminate ideas to a popular audience.[1] ICAIC would come to be Cuba’s only producer of national films and sole importer and distributor of foreign films.[2] Starting in 1961 the cine móvil (mobile cinema) program sent mobile projection units to remote areas of the countryside, where the illiteracy rate could be as high as forty percent and many lacked electricity.[3] In addition to producing documentaries and films by Cuban directors, ICAIC screened avant-garde features from Western Europe, the U.S., Latin America, and Asia. Perhaps unsurprisingly, it demonstrated a particular affinity for films from Eastern European socialist countries, including Poland, Hungary, Bulgaria, Romania, and the Soviet Union.

Before the revolution, film posters were largely imported from outside of Cuba. Promoting films made in  other countries, these mass-produced offset posters would offer close-up photographs of starlets, commercial script, and vignettes of stills.[4] In 1943, however, Havana-based artist Eladio Rivadulla Martínez began screenprinting film posters locally.[5] By 1960, ICAIC had opened its own screenprinting workshop, ushering in what would become known  as the golden age of the Cuban poster.[6] ICAIC alone  is thought to have produced over 1,700 original posters, in runs of 100 to 300 copies each.[7] These posters all conform to an identical vertical format, with distinct flat swathes of color—a uniformity of design that makes them immediately recognizable. These characteristics were in part the result of limited resources caused by the 1962 U.S. trade embargo, which dictated the size of poster print runs, the quality and type of ink and paper available, and the use of silkscreen rather than offset lithography.[8] The posters’ small 20 x 30-inch format allowed for their display in umbrella-like kiosks, known as paragüitas or sombrillitas, which held eight posters at once and were installed across Havana and other cities.[9]

Among the artists on the ICAIC staff was Rene Azcuy Cardenas (Havana, 1939–Miami, 2019), who became associated with ICAIC in 1960, and eventually produced more than 250 film posters for the agency.[10]  Trained at the Academia de Bellas Artes San Alejandro and Escuela Superior de Arte y Oficios, Havana, Azcuy’s most recognizable posters include Testimonio (1970) and Besos Robados (1970). He was known for juxtaposing black-and-white photographic imagery, often characterized by exaggerated halftone patterns, with passages of striking flat red color.[11] Because ICAIC’s silkscreen workshop did not have the technology to produce photographic stencils, the halftone dots were painstakingly cut by hand.[12] In this poster, La última cena (The Last Supper), Azcuy uses the white of the paper, along with a printed black ground, to create the effect of a candelabrum glowing in the darkness. Instead of melting wax, however, the individual candles bleed an arresting shade of red. A strip of sans-serif text at the upper edge announces that this poster represents a Cuban film produced in color by director Tomás Gutiérrez Alea, and starring actor Nelson Villagra. At the bottom left, Azcuy’s trademark lowercase “a” identifies him as the designer.

La última cena is a 1976 historical production set in Spanish colonial Cuba. The film follows an eighteenth-century plantation owner who reenacts the Last Supper in an attempt to indoctrinate the individuals he enslaved. The film brings into sharp focus the religious and ethical hypocrisies used by the ruling class to justify slavery. The candelabrum that Azcuy selects as the primary symbol of the film features prominently in the central scene of the Last Supper reenactment, framing the protagonists throughout. The addition of the bleeding candles in the poster evokes the film’s violent closing scene and serves as a stark representation of the brutality upon which the Cuban sugar plantation system was founded.

In contrast to how we might think of film posters today – flashy advertisements intended to increase ticket sales – ICAIC posters did not need to act as commercials. Film screenings were immensely popular in Cuba, costing only one peso, and low attendance was not a concern.[13] Instead, ICAIC posters offered a visual representation of a film, often focusing on a single iconographic element, designed not as targeted advertising but poetic accompaniment to the film itself.[14] Designers offered their own perspective on the film’s themes and sought to train the viewer to interpret visual symbols and compositional cues. Perhaps inspired by the campaign to spread literacy across Cuba, ICAIC artists were invested in educating the public in visual literacy, especially the ability to interpret abstract rather than literal representations.[15] Cardenas’ poster for The Last Supper in Cooper Hewitt’s collection does this to remarkable effect.

[6] David Craven, “The Visual Arts since the Cuban Revolution,” Third Text 6.20 (Autumn 1992): 79; Cushing, 114. While Craven lists 1965-75 as the golden age, Cushing understands it to continue through the early 1980s. In addition to the film institute, several other agencies are also renowned for their poster production during this period: the Comisión de Orientación Revolucionaria (COR), the party’s propaganda arm, the Organization of Solidarity with Asia, Africa, and Latin America (OSPAAAL), a Havana-based NGO, and the Casa de las Américas, among others.

[8] Alfredo Rostgaard quoted in Shifra Goldman, “Painters into Poster Makers: A Conversation with Two Cuban Artists,” in Dimensions of the Americas: Art and Social Change in Latin America and the United States (Chicago: University of Chicago Press, 1994), 152; Félix Beltrán quoted in Eva Cockcroft, “Art in Cuba Today: An Interview with Félix Beltrán,” Art in America 68 (January 1980): 10.