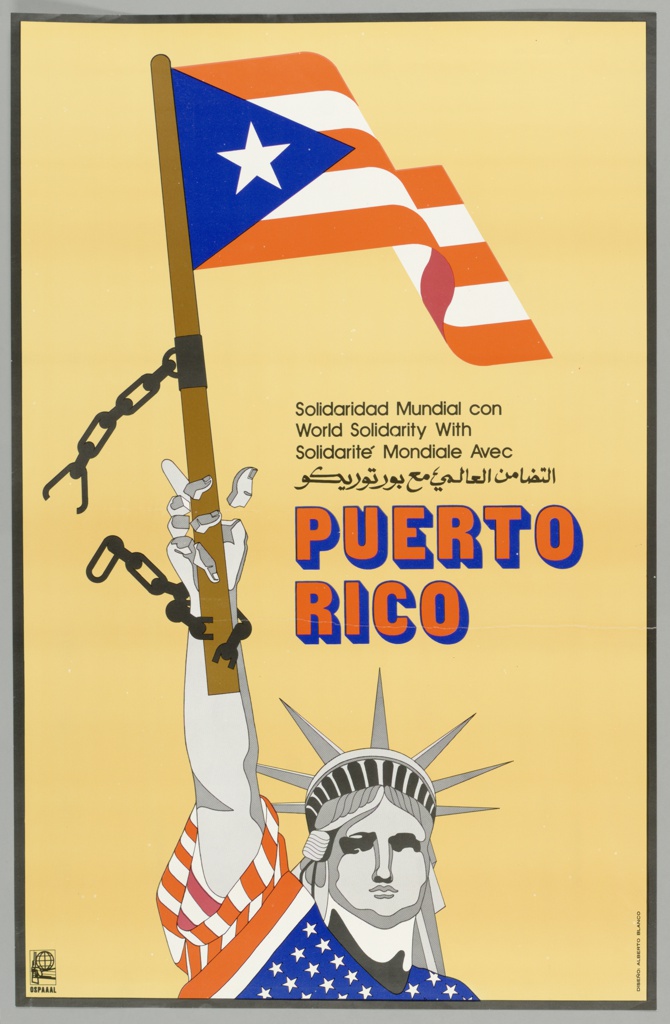 The Organization of Solidarity with the Peoples of Asia, Africa and Latin America (OSPAAAL), a non-governmental organization headquartered in Havana, Cuba, was founded in January 1966.[1] This poster by Alberto Blanco, proclaiming global solidarity with Puerto Rico, was produced for OSPAAAL in 1981.

Until 1990, OSPAAAL circulated Tricontinental magazine, which reached eighty-seven countries at its peak, and included in most issues political posters printed in color.[2] These posters often expressed support for international protest movements, with a particular focus on resistance to U.S. and European imperialism.[3] Frequent topics included the revolutionary efforts of Che Guevara and Fidel Castro and, farther afield, liberation struggles, indigenous justice movements, and armed resistance groups worldwide – such as the Black Panther Party in the U.S.[4] Most OSPAAAL posters include their familiar logo, a rectangular graphic of a hand thrusting a gun forward, with a globe in the background. As seen in this example at the bottom left, the logo references the organization’s support of international armed protest movements.

Blanco’s poster depicts the Statue of Liberty draped in the U.S. flag, holding in her upraised arm the Puerto Rican flag, in substitution for her usual torch. The chain originally restraining the Puerto Rican flag – fastening it to the statue – has been broken. Pairing a foremost symbol of U.S. freedom with the shackles of bondage, Blanco crafts a clear indictment of the U.S.-Puerto Rico relationship. He also makes reference to Frederic Bartholdi, the sculptor of the Statue of Liberty, and his initial plans to include broken chains on the statue’s left arm.[5] French abolitionist Edouard de Laboulaye envisioned the statue as a way to honor emancipation.[6] While the chains on her arm were replaced with a book in the final design, Lady Liberty still features fallen shackles at her feet.

In addition to alluding to the U.S.’s contentious history of slavery and freedom, Blanco’s poster lays claim to a global anti-colonial sentiment by including the phrase, “World Solidarity with Puerto Rico,” in four different languages, English, Spanish, French, and Arabic.

By the time this poster was produced, Puerto Rico had been a commonwealth of the U.S. for three decades. Ceded to the U.S. by Spain in the Treaty of Paris in 1898, following the Spanish-American War, Puerto Rico did not have the power to draft its own constitution until 1950. While declared U.S. citizens by the Jones Act in 1917, Puerto Ricans still nevertheless lack the right to participate in the Electoral College and to elect voting members of the U.S. Congress and House of Representatives. It has now been one hundred years since the Jones Act was passed, and Puerto Rico remains in a colonial state as a nonvoting territory of the U.S.[7]

Maeve Coudrelle is a Curatorial Assistant in Latino Design. This post is elaborated from an entry in “Looking for Design,” a series exploring work by Black and Latinx designers in the collections of Cooper Hewitt and the National Museum of African American History and Culture.

[1] Elissa Auther and Adam Lerner, West of Center: Art and the Counterculture Experiment in America, 1965–1977 (Minneapolis: University of Minnesota Press, 2011).

One thought on “Graphic Solidarity with Puerto Rico”

Citizens of Washington, DC feel solidarity with those of Puerto Rico because we also lack the right to participate in the Electoral College and to elect voting members of the U.S. Congress and House of Representatives.