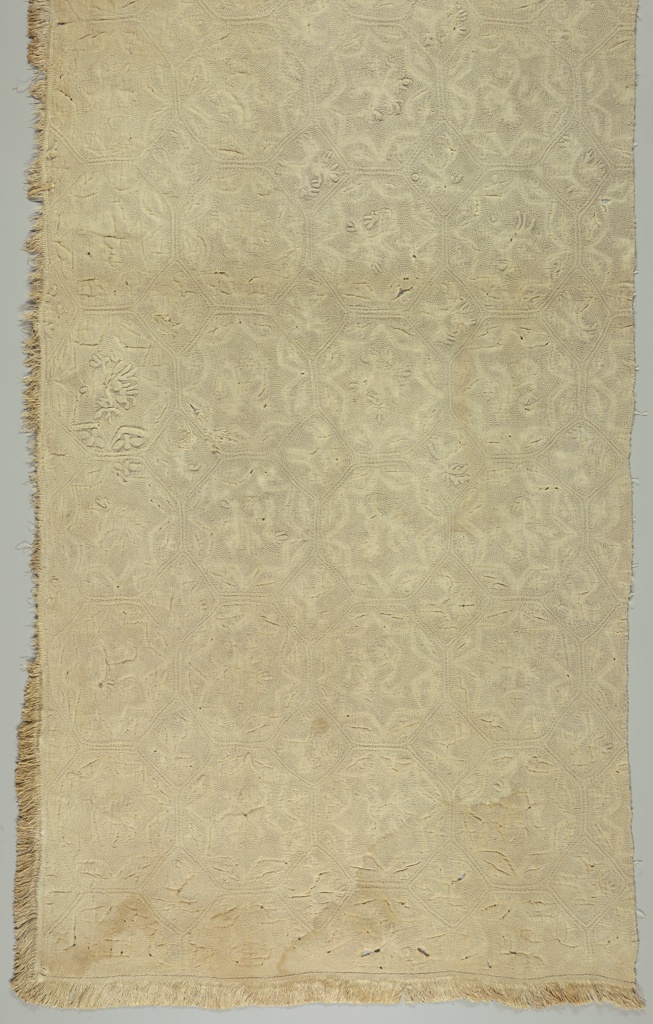 Posted by Kimberly Randall on October 4, 2019

Playful birds and beasts parade from left to right across this quilted and corded decorative textile (inv. 1976-68, dimensions 78.5 x 33.5 inches). Each crowned eagle, proud peacock and rooster, amiable lion, flying dragon, and four-legged beast with antlers but no head, appears within an 8-point star set inside a 6-inch-wide octagon. Smaller animals fill diamond shapes formed between the orderly ranks of octagons.

The museum attributes origin of this cover, or perhaps a former bed hanging, to fifteenth-century Italy. Animal motifs, real and fantastic, are common to this period, but most surviving examples show them not as the lighthearted beings seen in this piece, but depicted in solemn, even fierce postures and wearing severe expressions. For example, to signify the might of its lineage, a family’s heraldic arms often used a stern rampant lion. Illustrations in religious manuscripts often featured grisly dragons and monsters to indicate the fate of sinners.

Needleworkers created the motifs in this piece using the corded quilting technique, first outlining each bird or beast with small stitches made with white thread worked through two layers of linen. Then they made a small hole in the backing fabric through which they inserted enough short lengths of cotton cording to raise the figure in relief. Finally, they emphasized each bird and beast motif by filling all the background space between its outline and the 8-point star with closely-set tiny stitches, again stitched through both layers of fabric.

Detail of bird motif in quilt

But here is a mystery. At some point during the 600 years between the time the piece was made and the museum acquired it in 1976, the backing was slashed and the cording within the bird and beast motifs and the star was removed. Only a few bits of cording remain to indicate that the figures were once fully stuffed. An even larger fragment of a similar piece in the Victoria and Albert Museum had suffered the same fate by the time the London museum acquired it in 1902 (inv. 1568-1902, dimensions 78.5 x 43 inches). There is nothing within the skimpy provenance of either piece to explain why the cording was removed. Without the relief the bird and beast figures are difficult to make out.

A few surviving inventories record the presence of Italian-made bed chamber textiles depicting “beasties” in aristocratic and even royal households in both the fourteenth and fifteenth centuries, although the brief notations do not tell us whether the animal motifs were daunting or amiable figures. This centuries-old piece that depicts otherwise wild beings as friendly is an early expression of a modern day embrace of portraying potentially dangerous beings as sympathetic — think of Dr Seuss’ Grinch and Maurice Sendaks’s “Wild Things.” Children’s librarians will tell you, as did two in my local library, that stories about kindly monsters are a great hit with kids and their parents.

Kathryn Berenson currently focuses her research on medieval and Renaissance quilted work originating in Europe and the Mediterranean region.

One thought on “A Quilted Menagerie”

Very interesting! Thank you for the detail drawing. The photo of the fabric itself does not tell the story.