A Piece of Cloth for the Future 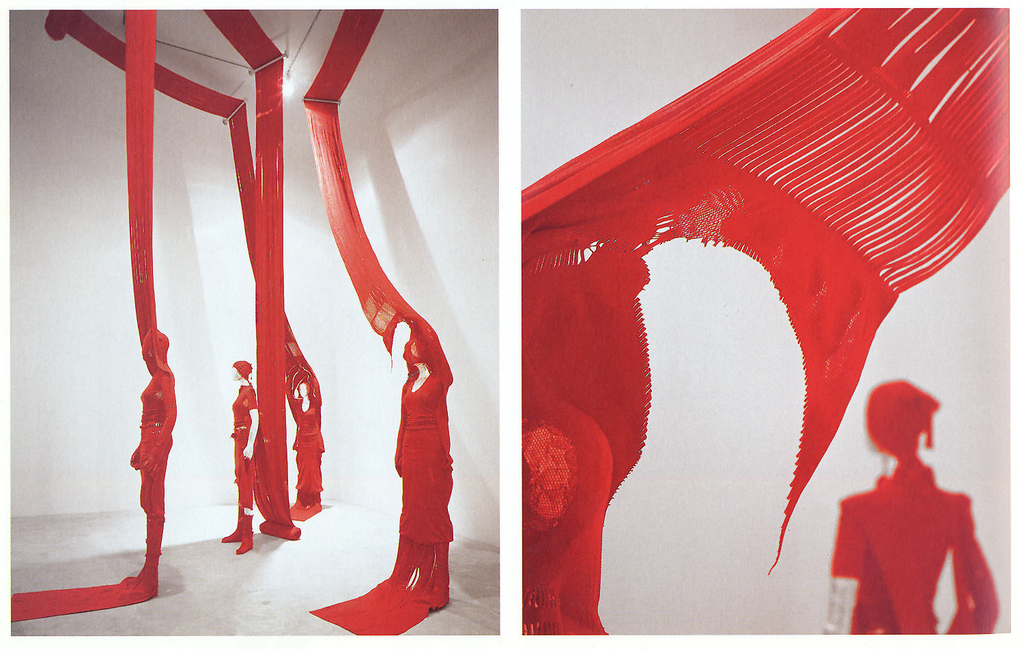 Posted by Kimberly Randall on September 23, 2019

“At the moment of economic abundance, the concentrated result of social labor becomes visible and subjugates all reality to appearance, which is now its product.”
Guy Debord, Society of the Spectacle (The Commodity as Spectacle: 50)

20 years ago, APOC (A Piece of Cloth) was publicly launched, a collaboration between Issey Miyake and Dai Fujiwara. This work still impresses upon its viewer an excitement and desire for the future. APOC continues to be revolutionary as it continues to expose assumptions in textile work and body-oriented-objects. APOC’s first impression is its sculpting one thread into a continual line of zero-waste, 3-dimensional objects. Fiber workers have always worked this way by hand and continue to pass this knowledge on. Translating these techniques to machine processes was one of our species’ most impactful accomplishments, most notably perhaps is Jospeh-Marie Jacquard’s influence on the Industrial and Digital Revolutions. Digitally designed knits have since saturated and expanded production beyond soft-goods onto objects for which knits once seemed ill-fit.

Potential for zero-waste and seamlessness has often been highlighted since the conception of APOC. While this is physically significant to earth’s environment and our sustainability, APOC additionally suggests a shift in perspective that includes ‘yarn’ or ‘thread’ in the vocabulary of the user/consumer. This illuminates the process of cloth and clothing production to its end-use consumer, potentially exposing issues of mirky and invisible labour hidden in other mass-market products. This knowledge can help consumers push back on psychological obsolescence/obsolescence of desirability.

APOC could be viewed as a predecessor to selfie culture via editable garment. Wearers of APOC simultaneously tap into an individuality while becoming one with the group. The resulting garments of APOC become a sort of groupthink referent similar to using shared filters and apps today: the self becomes the variable.

APOC has often been presented on models of recent western fashion standards: tall and thin, female-presenting. I would like to see an expansion in our understanding of this important work by offering up portions of APOC to a larger population of models. This would include different abilities and disabilities (including wheelchair and assistance-using people), socio-economic status and geographic background (the Global South), different genders (including non-binary, trans, transitioning, and non-conforming folks), and full-bodied/fat-identifying people.

Understanding the seamless, doubleknit nature of APOC leaves me to believe in its adaptability and strengths as a universally-designed/designable object. For instance, how does the form change on the body as the object becomes re-, dis-oriented, adapts its identity to the body using it, rather than the reverse? As APOC is turned upside-down, placed on bias or cross-grain, limbs and head begin to enter different holes and fullness gathers along new territories of previously underrepresented bodies.

As the fashion and textile industries evolve and reassess their understanding of the bodies it operates in service to, works like APOC continue to hold strong potential for the future of universal design. If the design process evolves to be multi-directional in conversation (to include insights from user back to designer) assumptions will be exposed and adjusted to achieve and re-evaluate design goals.

Gabe Duggan is an Artist and Assistant Professor at East Carolina University whose research considers tension and balance through installation, performance, and interdisciplinary collaboration.

One thought on “A Piece of Cloth for the Future”

Not quite sure how you would ” include different abilities and disabilities (including wheelchair and assistance-using people), socio-economic status and geographic background (the Global South), different genders (including non-binary, trans, transitioning, and non-conforming folks)”

How would you show hearing- or sight-impaired persons (with a hearing aid or cane? That doesn’t seem quite right.).
How to show socio-economic differences? How to show non-binary, trans, transitioning, and non-conforming persons?