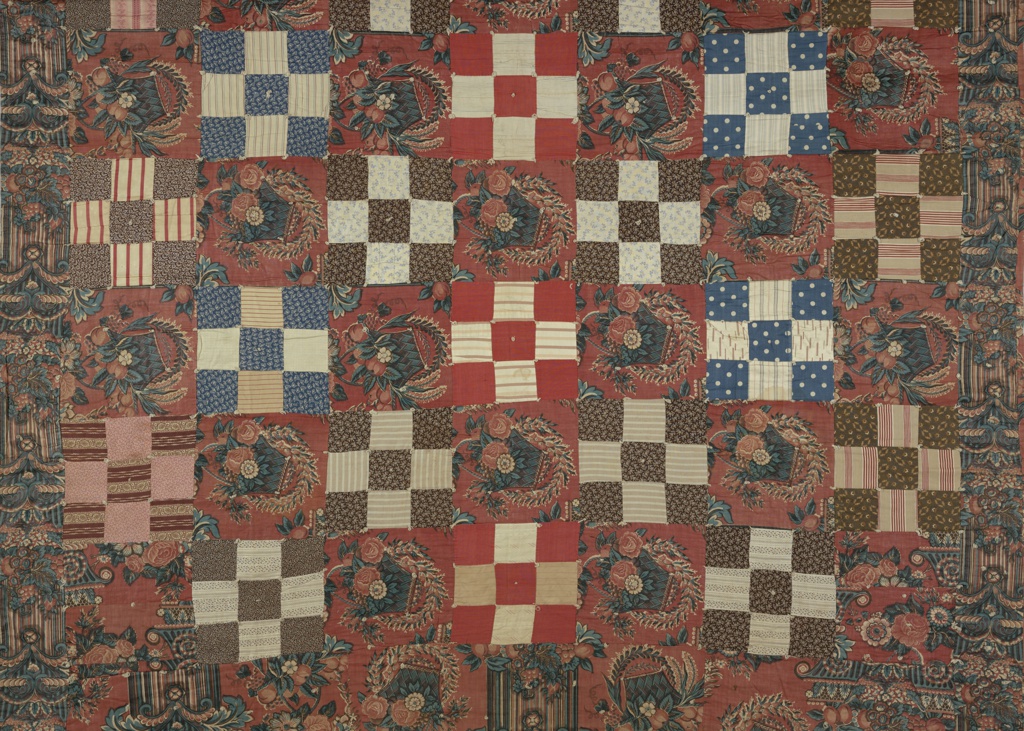 Posted by Kimberly Randall on September 16, 2019

This English nine-patch quilt represents a transitional moment in design that shaped textile artisans’ quiltmaking activities in the first half of the 19th century. In her seminal essay, “Paradigms of Scarcity and Abundance: the Quilt as an Artifact of the Industrial Revolution,” Rachael Maines argues that—prior to technological advances that reduced the degree of hand labor that the production of cloth and thread required—quilts tend to have been made under conditions of scarcity; they would be made of whole cloth or of recycled large fabric pieces from clothing or home furnishings.[1]

The blocks of large-scale, pillar-patterned fabric in this quilt likely were produced between 1825 and 1830, when polychrome, block-printed pillar fabrics that had been popular between 1800 and 1808 were revived to showcase the remarkable capacity of new roller printing technology to produce fine, multi-colored fabrics.[2] It is interesting that the maker of this quilt—while resourcefully using relatively large pieces of the pillar fabric–nonetheless chose to “fussy cut” the blocks used between the nine-patch blocks. For design purposes, the quilt artisan centered the floral-filled basket motif in the center of the blocks cut from the pillar fabric, likely creating more wasted fabric than had the blocks been randomly cut from the pillar print. Fussy-cutting fabrics is a design choice more aligned with a post-industrial design glorification of abundance.

Similarly, the use of what appear to be scraps of shirting and/or dress fabrics in the nine-patch blocks suggests that clothing fabrics were no longer being repurposed into smaller cloth items that eventually would be used up, as was the case in the prudently economized pre-industrial cloth. The advent of fitted clothing styles, the availability of commercial patterns to make fitted clothing, and the decreasing cost of cotton cloth translated into more fabric scraps being available to textile artisans for decorative purposes in accordance with a paradigm of abundance.

Note how deliberate the maker of this quilt was in the placement of striped fabrics in the nine-patch blocks. If the stripes were not all flowing in the same direction, they were placed symmetrically. This is consistent with the intent the quilter showed when placing all the floral-filled basket blocks in one direction, giving visual coherence to an otherwise scrappy quilt.

That this quilt appears to have been tied, rather than quilted, suggests it was made primarily for utilitarian purposes with frugality a driving design influence. Yet this decision to simply tie the quilt exists in tension with the many other choices the textile artisan made that align the work with a design motivated by abundance. In essence, this quilt proves to be an excellent example of how early 20th century textile artisans were navigating the transition from a design paradigm of scarcity to one of abundance.

[1] Maines, Rachel. “Paradigms of Scarcity and Abundance: the Quilt as an Artifact of the Industrial Revolution.” Pp. 84-89 in In the Heart of Pennsylvania Symposium Papers, Ed., Jeannette Lasansky. Lewisburg, PA: The Oral Traditions Project of the Union County Historical Society, 1986.