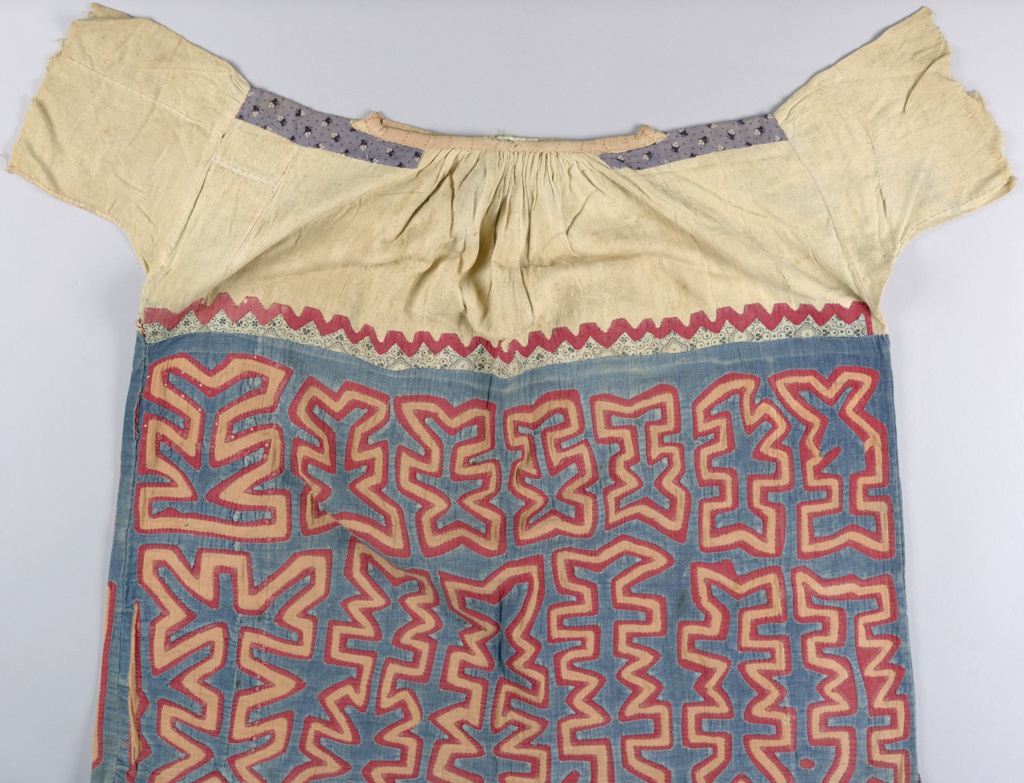 Posted by Kimberly Randall on September 4, 2019

The first thing that I noticed about this mola was its striking design. With its change of scale and variation in motif, the placement of elements filling the panel, the contrast of warm and cool colors, and its contrasts of light and dark, it is a fine example of design principles at work. The designs seem to be abstracted plant forms, although the layout is so expertly choreographed that it’s hard to distinguish the background from the foreground.

The mola blouse is made and worn by both the girls and women of the Cuna [Kuna or Guna] people of the San Blas Islands off of the coast of Panama. By now the blouse has come to exemplify traditional work of both the Cuna people and Panama itself, but it wasn’t always so. Although an exact date hasn’t been determined, the mola seems to have originated in the late 19th century. Several factors may be responsible for its introduction, among them missionaries wanting women to cover themselves, along with a population shift from the mainland to islands which proved to be a cooler and damper climate, necessitating more clothing. Since molas are made from a tightly woven trade cloth, increased trade with outside countries, facilitated by the move to the islands, was probably also a major factor in their development.

The mola blouse has changed and evolved slowly over the 20th century. The form remains basically the same – five elements define the blouse: two appliquéd panels that complement each other but are not identical, two sleeves and a one-piece yoke. Over time, the sleeves have expanded exponentially, while the body fits more closely. The imagery has changed from more abstract designs to those that are more figurative and representational.

Mola panels are worked in both appliqué and reverse appliqué techniques. Fabrics are layered on top of each other. The top layer is cut, its edges turned under and hand sewn onto the layer underneath. The panels are now sometimes also embroidered for more detail.

This blouse is most likely from the first quarter of the 20th century. The colors of blue, red and orange are traditional for early molas. The blue was most likely indigo. The seamlines show what the original color would have been though it is now quite faded from washing and wear. The red fabrics vary from a solid to a small black dot.

The body is wider than later versions and the sleeves are short and relatively square. There is at least one repair to the sleeve. The front neckline is gathered into a pale pink neckband. The seam that attaches the mola to the yoke falls just above the bust line. It is decorated with a zig-zag strip that is later replicated using commercial rick rack. Both of the calico fabrics used, at this seamline and the replacements at the shoulder seams, are from the late 19th century.

This mola blouse, like the traditions it so beautifully represents, demonstrates how a culture can sometimes simultaneously invent, adapt, and persist, as history, geography, and access to materials all change over time.

Janine LeBlanc is a collections assistant at the Gregg Museum of Art and Design at North Carolina State University. Her previous career was in graphic design.

← Nature and the Embroidered World
Warp and Weft with Richard Landis →