Nature and the Embroidered World 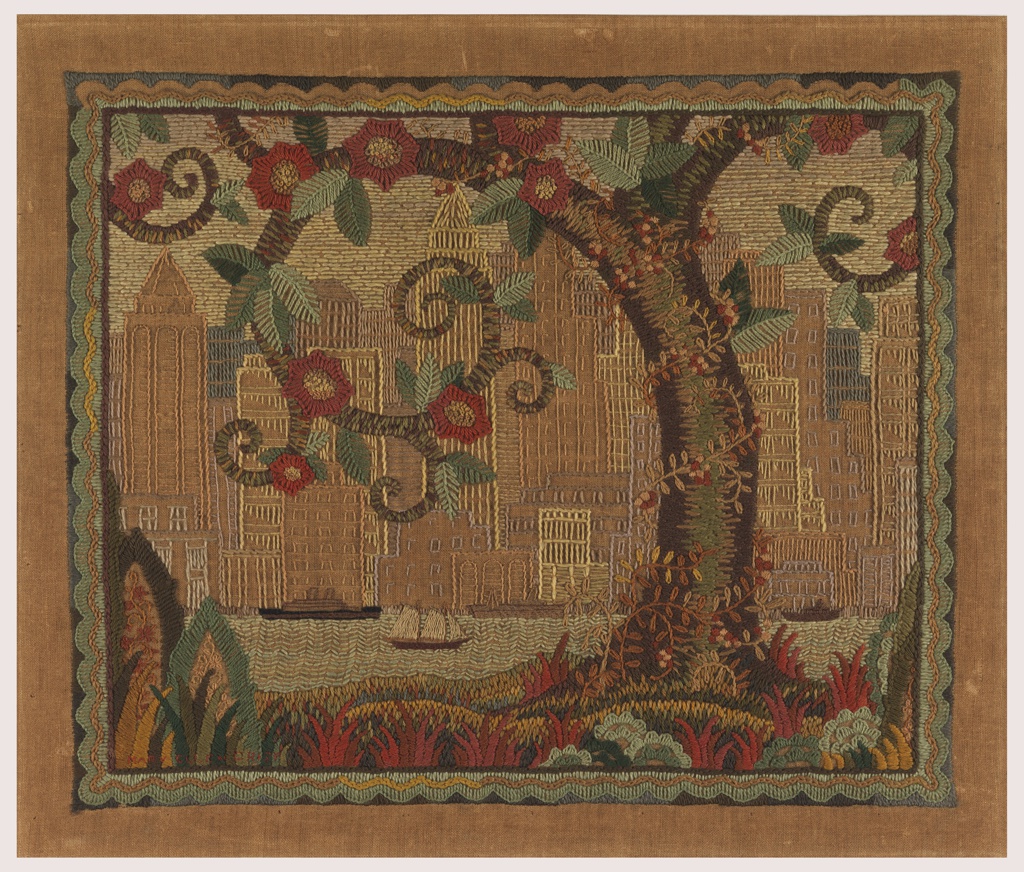 Posted by Kimberly Randall on September 3, 2019

This decorative depiction of a flowering tree dominating the foreground and juxtaposed by the geometric shapes of city skyscrapers in the background reflects the flexibility of Mary Ellen (Ackerman) Crisp (American, 1896-1973) in her embroidery designs. Throughout her career, Crisp created embroideries that ranged in style from geometric abstraction to highly decorative organic designs and often combined the two, as seen in this embroidery. Beginning her creative career as a seamstress and dress designer after attending New York’s Art Students League and the Grand Central School of Art, Crisp took up embroidery in the 1920s. She exhibited these embroideries in the 1930s and 40s in venues as diverse as the Grand Central Galleries, the Architectural League Galleries, Macy’s department store, the Women’s City Club of New York.

In addition to her unique embroideries, Crisp also created embroidery kits for sale, comprised of embroidery patterns she designed that were stamped onto linen, a color sketch of the embroidery design and the necessary yarns for making it. These kits were sold at department stores across the United States and ranged in subject from The Mayflower (collection of the Provincetown Museum) to homesteading scenes and even a map of South America. Like other women artists trained in modern art and experimenting in embroidery, Crisp opted for comparatively few variations of stitches to establish the simplification of form that characterized modern abstraction. At the same time, she expanded that aesthetic by integrating decorative elements. In this embroidery, the decorative, swirling branches of the trees are reminiscent of the arabesques of Matisse. Crisp’s limited color palette of browns, reds and greens is also characteristic of several of her embroideries, although another embroidery in the Cooper Hewitt collection, of a vase of flowers, demonstrates her experiments with a broader range of colors.

Perhaps the city in the background of her embroidery is Manhattan, where she and her husband, Canadian born muralist Arthur Crisp, resided for many years. The Crisps owned Seven Gracie Square on the Upper East Side; they rented out units and lived in the penthouse. However, the couple lost the property to foreclosure in 1935 as a result of the Depression. The 1930s Depression provides an interesting framework for considering the subject of this embroidery. Although the buildings do not match up exactly with the skyline of Manhattan, the design comes close to a view of Gracie Square. With the Crisps either concerned about the loss of their property or having lost it by the time the embroidery was made, it is not surprising that Crisp might have considered Manhattan from this distanced perspective. Whether representative of New York or a more generalized perspective on the American city, in the embroidery, nature takes precedence over the buildings relegated to the background at a time when cities were suffering from decline. However, another embroidery in the Cooper Hewitt collection from the same period suggests a more idyllic view of city life with groups of people actively enjoying the beauty of New York’s Central Park.

Cynthia Fowler is an art historian and professor of art at Emmanuel College in Boston whose book The Modern Embroidery Movement (Bloomsbury, 2018) provides an indepth look at embroideries by Crisp and other American modern artists in the first half of the twentieth century.