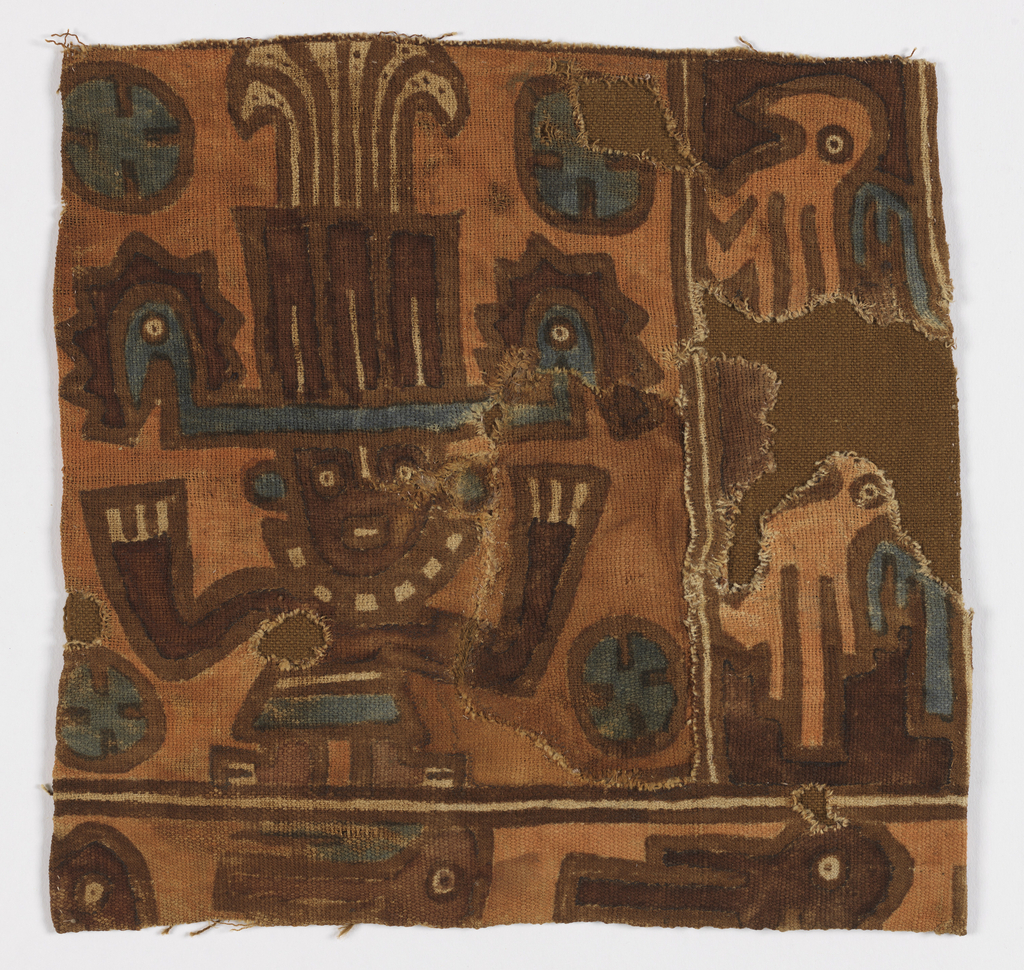 Posted by Kimberly Randall on September 2, 2019

The people of the ancient Andes have long been recognized for their finely made, labor intensive, woven and embroidered textiles whose quality and refinement reflect the exceptional skill, knowledge, and expertise of their makers. However, other Andean textiles—including this fragment—were produced using a less demanding process, with designs painted directly onto a plain-weave cotton fabric. Painted textiles such as this work were produced around 1100-1400 [Late Intermediate Period] in the Chancay region along the central coast of Peru.

Farmers along the Peruvian coast cultivated cotton in a wide range of shades, likely reflecting an artistic desire for fibers of a variety of hues. The natural cream-colored cotton of this fragment was used to accent the design and also can be seen in the areas of loss where the weave structure and fibers are visible. Paints were produced in numerous colors; this piece was decorated using a light reddish tan, light and dark brown, black, and blue. Although relatively little research has been done on specific colorants, mineral pigments—including iron oxides, ochers, and cinnabar, as well as indigo, were commonly used.

This fragment was cut from a much larger textile—likely a wall hanging—with only the right side preserving the original finished edge [the selvage]. Although only a detail, the imagery is recognizable, with motifs and design that were widely used throughout the region. This fragment isolates a single abstracted figure, outlined using a thick light-brown stroke, with details added with a thin black line, and accents in blue and cream. As is typical of such representations, the figure stands in an iconic pose with a mask-like face, feet turned outwards and arms upraised. The figure is anthropomorphic—probably depicting a historical or legendary individual, however, it may represent a supernatural or otherworldly being. Although its identity is unknown, the figure wears regalia indicating high rank or status, displaying a large square-beaded necklace, earrings, and an ornate headdress topped with a spray of feathers and projecting side elements that end with the crenelated heads of birds.

The figure is surrounded by four-petaled motifs and stands within a frame demarcated by thin parallel lines. Along the right edge are two blue-winged birds with curving beaks of a parrot, while a line of hummingbirds appear beneath the feet of the figure. These same motifs were likely repeated across the surface of the original textile, with identical framed figures arrayed in rows or diagonally, as if in a procession, surrounded by elements from the natural world.

Painted textiles such as this could be produced more quickly than when creating patterns during the weaving process. The increased production of this textile at this time suggests an increase in the number of individuals who could own and use such fabrics, both local and distant. The boldness of the painted line and the repetition of motifs enabled it to be read from a distance, increasing the ability of such works to communicate messages about their owners and makers.

Elizabeth Pope, Ph.D., is the Collection Manager and Research Assistant in the Arts of Africa and the Americas department at the Art Institute of Chicago and is a specialist in Mesoamerican art, architecture, and ritual performance with a particular focus on the cosmology and cosmogony of the ancient Maya.

← Keeping a Watch on Waistcoats
Nature and the Embroidered World →

One thought on “Peruvian Painted Patterns”