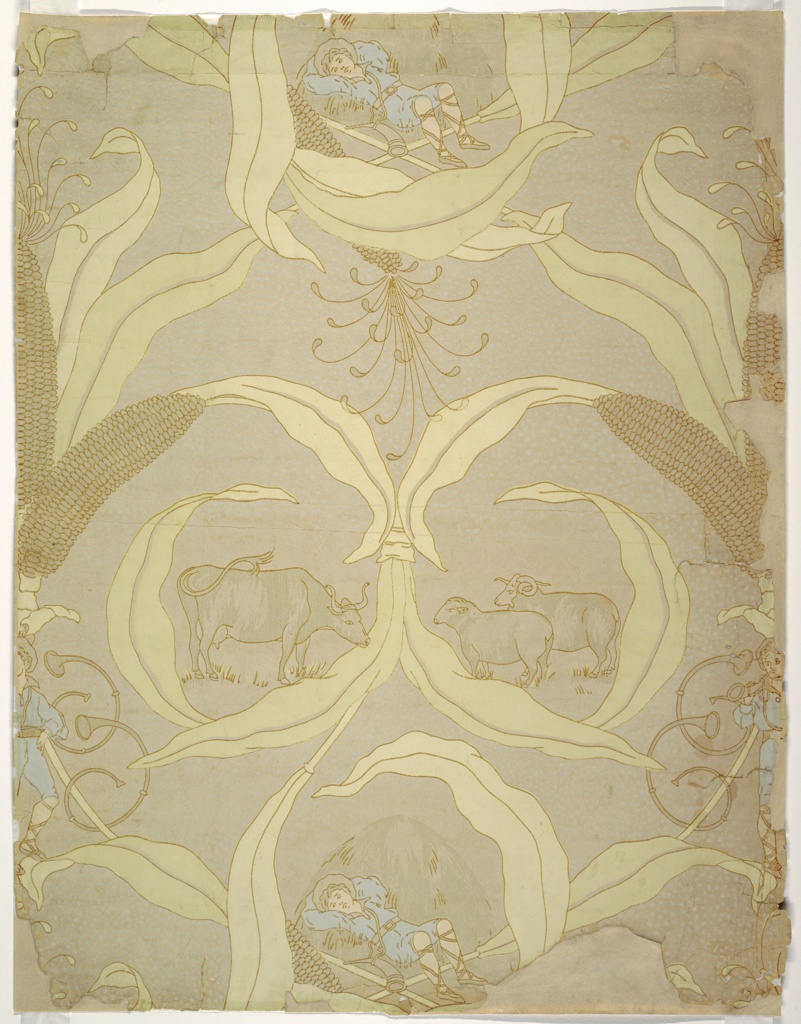 This is a charming children’s wallpaper based on the Little Boy Blue nursery rhyme. The design contains three different vignettes, arranged in trefoil format, each one illustrating a different line from the verse. A cow is shown in the first view, two sheep in the next, while the little boy in blue is shown sound asleep in front of a haystack, horn by his side. Each of the views is enframed in scrolling corn leaves. Along the edges of the design a cluster of three ears of corn alternates with another image of Little Boy Blue, this time at full attention blowing his horn. The design also has a spotted background which is hard to see in the image due to the paper discoloration. Parts of the design were printed with mica pigments which reflect the light when viewed from the right angle, including the fur and fleece on the cow and sheep, the haystack, and probably the large ears of corn.

Grace Lincoln Temple was a native of Boston where she studied at the Art Museum School. She moved to Washington, D.C. in the 1890s. She taught art classes and began doing interior decoration, becoming the first woman to work as a decorator of public buildings. She helped First Lady Frances Cleveland with some decorating in the East Room of the White House, decorated the United States Government Building at the Louisiana Purchase Exposition (St. Louis World’s Fair, 1904), and supervised decoration for the Smithsonian Institution rotunda.

Over the course of her decorating career she assembled an archive of significant wallpapers which she generously donated to the Cooper Union Museum in 1938. Included in this gift were a couple of designs by Walter Crane, a paper honoring Charles Lindbergh’s historic flight, a group of mid-eighteenth-century British papers from the Jeremiah Lee Mansion in Marblehead, MA, and one of the department favorites, an Anglo-Japonesque design with the Brooklyn Bridge.