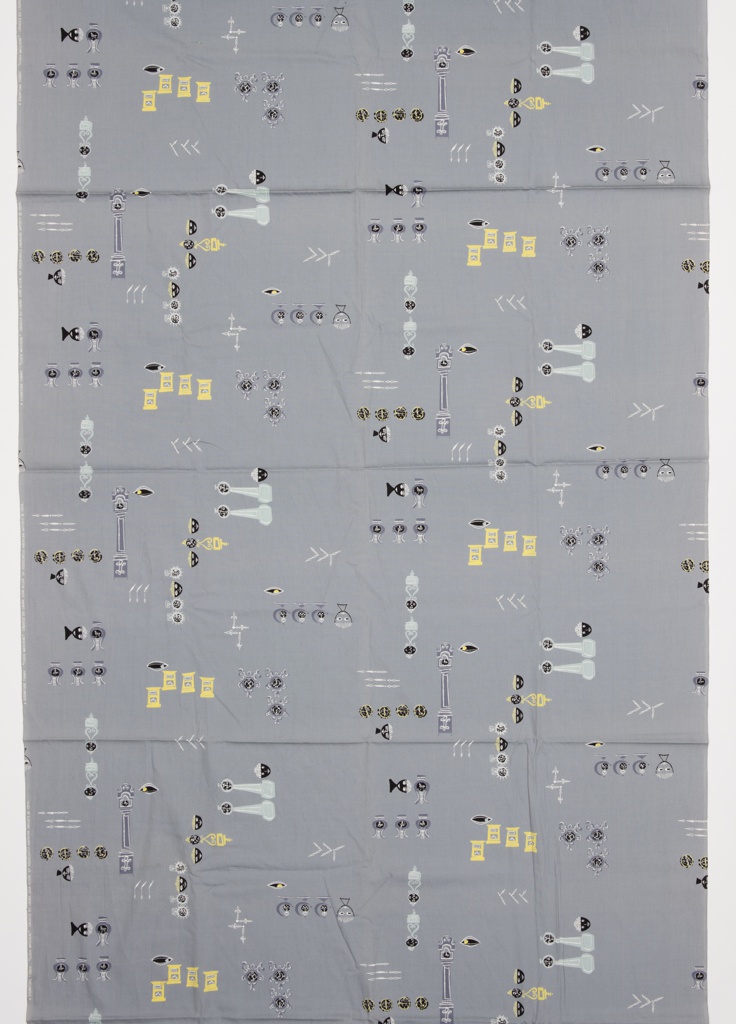 Laura Jean Allen rose to fame by the time she was 30 as an illustrator for Seventeen magazine and designer of clothing and cosmetic compacts for teenaged girls. She became involved with Associated American Artists in the early 1950s and was soon one of the group’s most prolific textile designers.

Upon the 1954 release of this collection of Signature Fabrics by M. Lowenstein & Sons, Women’s Wear Daily detailed Allen’s contributions, including Clock Watchers: “In another [interesting conversational], she uses old-fashioned clocks and headpieces in irregular allover treatment.”[1] The clocks range from grandfather to atomic, and many of the “headpieces” might more accurately be described as primitivist masks. This design appeared in at least three colorways, on gray, blue, and black grounds.

The fabric is more restrained than some of Allen’s others, but it takes a configuration familiar to her work, in which relatively small figures of varying orientation are arranged to create loose outlines for boxes of solid ground color. This not-quite-random effect obscures the pattern’s repeat.

Although a reviewer for the New York Times mused that Allen’s small-scale textile designs were best suited to men’s garments,[2] Vogue Pattern Book featured Clock Watchers in a spread targeted toward women later the same year. The fabric appeared as one of three large swatches, matted like works on paper and resting on decorative easels; a model in a full-skirted, off-the-shoulder dress joined the lineup of pieces on display. “You’re a work of art,” the caption raved. “You walk in beauty when you wear these exciting, original fabric designs! For each Signature print is the creation of a world-renowned artist…transposed from his canvas to fine-combed Sanforized cottons…many with a luxurious silk print look.”[3] Within Associated American Artists, only one in five members who designed textiles were women; Allen was the sole female designer with work included in this ad.

Rachel Ward Sepielli is a graduate of the master’s program in the History of Design and Curatorial Studies offered jointly by the Parsons School of Design and Cooper Hewitt, Smithsonian Design Museum.