A Living Factory of Chic 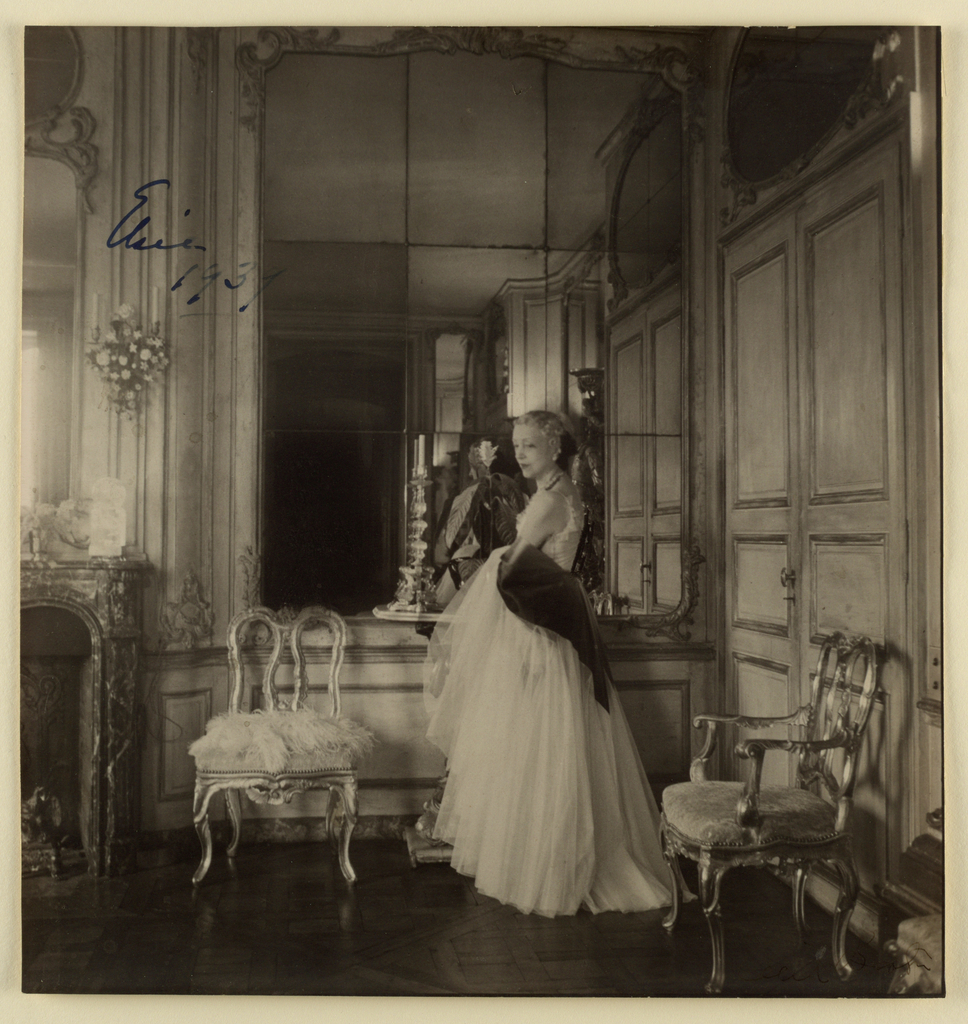 A woman of nearly seventy-five, dressed in a voluminous white gown with contrasting shawl, gazes over a well-appointed interior in a photograph by a thirty-five-year-old aesthete. The woman is Elsie de Wolfe, the interior is of her decoration, and the photographer is Cecil Beaton. In this photograph, originally outfitted in a mirrored frame designed by de Wolfe, the two creators’ oeuvres converge, as they both had a talent for elevating reality to the glamorous artifice they desired. Their lives and friendship bridge generations of “good taste”—from the Gilded Age to the golden age of glamour.

De Wolfe was at the center of a vibrant social circle of wealthy women in late Gilded Age New York, a circle that included Sarah and Eleanor Hewitt, the founders of Cooper Hewitt. She started her career as an actress and traveled to Paris before every theater season to select her own costumes.[1] Luckily or not, she garnered more acclaim for her wardrobe than her character portrayals, and transitioned the attention around her taste into a career as an interior decorator, a profession she later claimed to have invented.[2] As exhibited in this photograph, her decorating taste tended to favor the eighteenth-century French Louis XV style—“If it was good enough for Marie Antoinette, it’s good enough for you.”[3]—with generous mirrors, pleasing natural curves, and light colors.

Beaton and de Wolfe met through Elisabeth “Bessy” Marbury, de Wolfe’s longtime partner. De Wolfe and Marbury—a renowned theatrical agent—became companions in 1892 and were living together as a couple until Elsie unexpectedly married Sir Charles Mendl in 1926. The marriage was largely perceived as a marriage of convenience, or perhaps even a marriage of aesthetics (who doesn’t want the title of “Lady”?). In 1930, Elsie was visiting from Paris and was staying with Bessy in what was formerly their shared Sutton Place home. Beaton had started working regularly for Vogue magazine, and, new to New York, had “wangled a letter of introduction from [writer] Osbert Sitwell to Bessy, who was a legend to the gay young things in the London set, in which he moved.”[4] When he finally had an opportunity to meet the legendary Marbury in 1930, he inevitably met Elsie as well. Observing her style, poise, and wit, he later described her as “a living factory of ‘chic.’”[5]

Beaton was himself no slouch in the chic department. His photographs were informed by the elegance and élan of his Edwardian upbringing, echoing the exaggerated decadence of the 1890s, inspired by figures such as Oscar Wilde. Producing an oeuvre that is sensual and romantic, Beaton’s sensibility had always been sophisticated and glamorous, albeit indulging the artificial—in his university days, he was known to have attended class at Cambridge in female drag. He also took inspiration from the theater and produced stylized vignettes of otherworldly elegance and glamour.[6]

This photograph of de Wolfe was a relatively early portrait considering Beaton’s storied career (this was twenty-five years before Audrey Hepburn in big hats in My Fair Lady). The photograph was also taken at a transitional moment in Beaton’s career. In 1938, a year earlier, he had been fired from his position at Vogue for an editorial indiscretion that demanded a large reprint of an issue. But in July 1939, he received a now-famous phone call from Buckingham Palace asking him to photograph now-Queen Elizabeth II. The commission reinvigorated his career as a photographer and portraitist.[7]

This Elsie moment was photographed either at Villa Trianon at Versailles, a small chateau that Elsie and Bessy had purchased with their friend Anne Morgan in 1903, or at Elsie’s apartment in Paris. Beaton had been a guest at de Wolfe’s Circus Ball in 1939, her second-annual themed party at Villa Trianon that was considered to be the final soirée for Parisian society before World War II (instead of “RSVP” de Wolfe joked “INW”— “If No War”).[8] While the photograph is hand-dated by Beaton as 1939, de Wolfe’s ensemble is not what she wore to the 1939 Circus Ball—the Mainbocher gown she wore in 1939 is more sparkly—it is actually what she wore to her inaugural 1938 ball. (As possibly part of the same photo session, Beaton also captured de Wolfe in the same interior in the radiant Apollo of Versailles cape made for her by Elsa Schiaparelli, a photograph in which she barely outshines her longtime secretary Hilda West, standing nearby.) Whatever the fact or fiction of the date (or which extravagant party it orbited), the photograph captures the decadence of eras both ending and beginning.

The Villa Trianon was occupied by Nazi troops during World War II. After the war, Beaton was the first to report back to de Wolfe on the state of her dream home.[9] The wine cellar had of course been pillaged and a chandelier stolen, but she would be able to restore it to the chic home of her dreams.

One thought on “A Living Factory of Chic”

Christian Rohlfing always had this framed photo in his office in the Miller house. Seeing it brought back memories of the early days at Cooper-Hewitt. Dorothy Globus