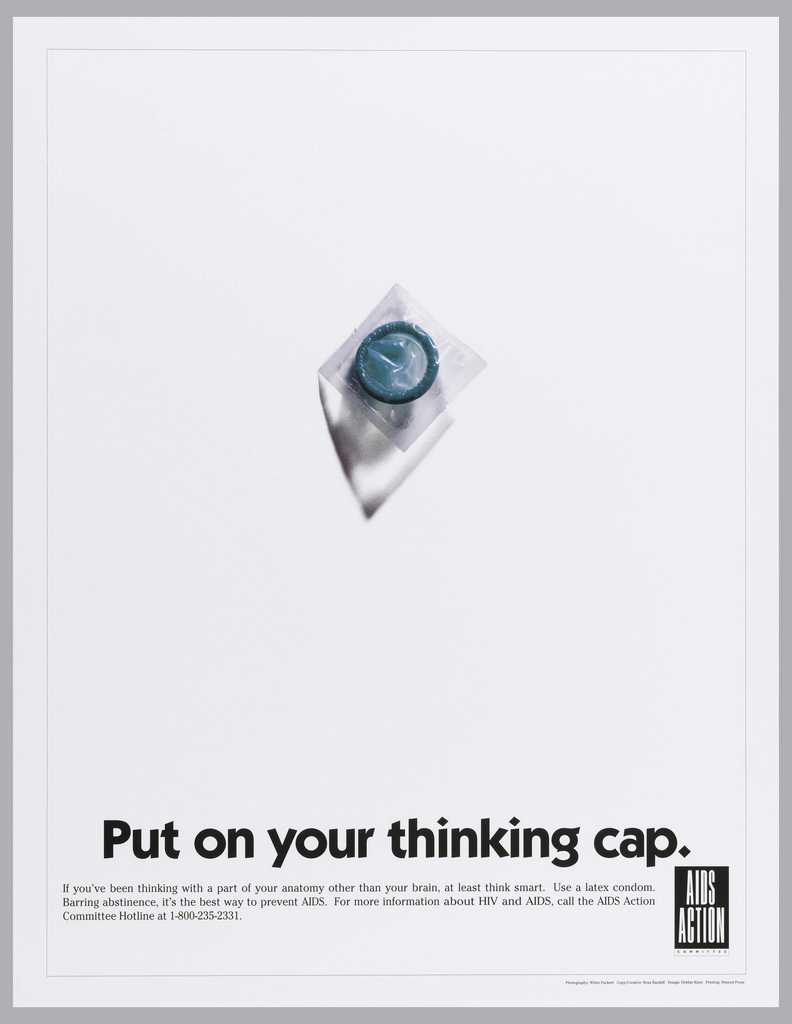 In the wake of the AIDS epidemic that arose in the 1980s, greatly impacting the gay community, numerous healthcare organizations sprang up to take charge in the care and support of individuals infected by and living with the disease. Once it was determined that the HIV virus was primarily sexually transmitted, education around sexual health became and continues to be a chief method in limiting the spread of HIV/AIDS.

Like many organizations, the AIDS Action Committee in Boston, Massachusetts, produced a series of posters in 1993 to communicate safe-sex strategies, here focusing on condom use. Simple and straightforward, the posters follow in the graphic tradition of the object poster, in which visual elements are reduced to one central object on a stark background and supplemented by minimal but purposeful text.[1] In the early twentieth century, Lucian Bernhard introduced this concept to modern marketing through his influential poster for the Priester Match Company. Bernhard placed an illustration of two matches on a solid background with the name “Priester” emblazoned above. In the AIDS Action Committee series, designer Debbie Klein swapped the two matchsticks for a latex condom. The pocket-sized hero is supported by a witty one-liner to drive the message home. In words by Ross Rackliff, the poster series proposes a range of motivations to encourage condom usage in one’s sexual practices, from common sense and sharing-is-caring to promises of enhanced performance.

Through the work of the AIDS Action Committee, AIDS education and condoms were introduced into Boston schools in 1994.[2] AIDS Action continues to fight the causes and ramifications of HIV/AIDS.

← All Sticks, No Stones
A Living Factory of Chic →