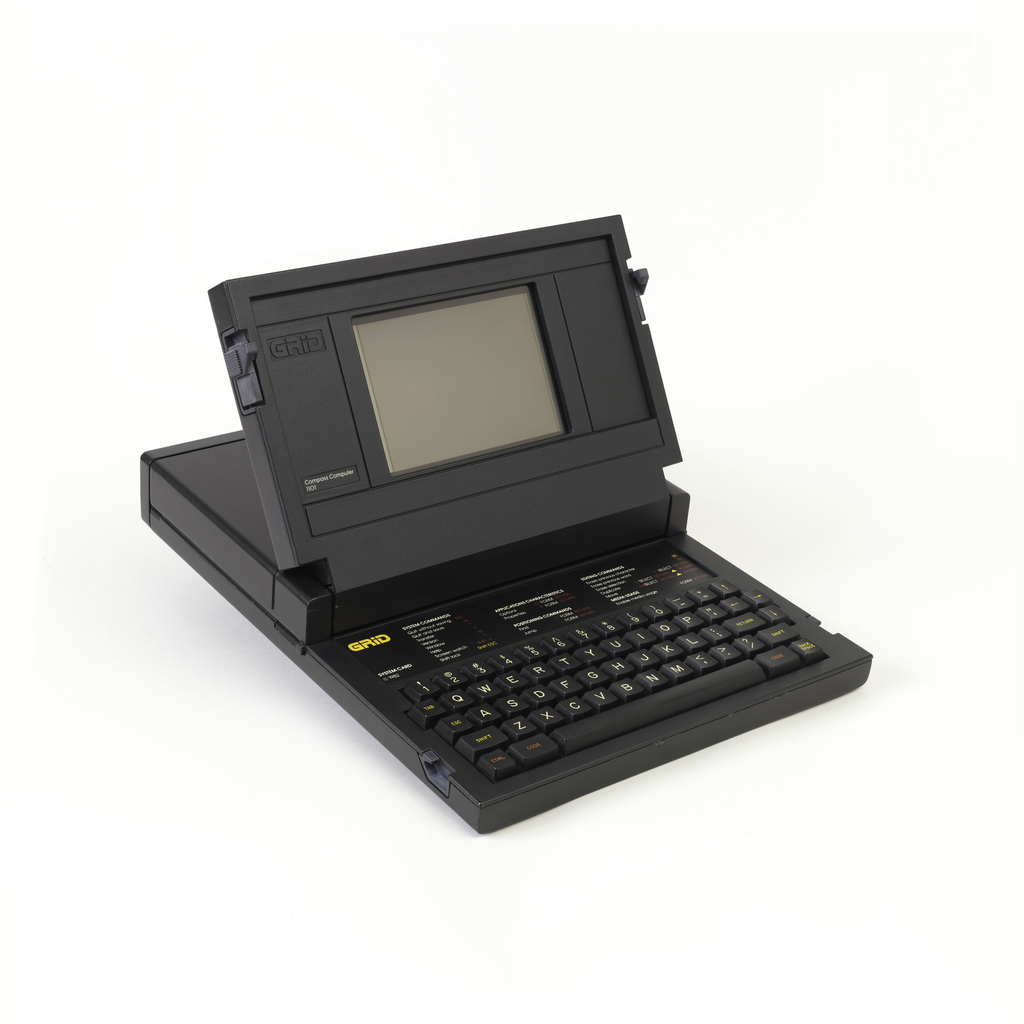 The GRiD Compass laptop computer prototype is one of the most significant historic computers in Cooper Hewitt’s collection. Not only is the GRiD Compass one of the first laptop computers, with its innovative clamshell case, but it was also designed by Bill Moggridge, an industrial designer who went on to became director of Cooper Hewitt from 2010 until his death in 2012.

This case study investigates preservation concerns for early portable computers. Software, hardware, and industrial design are three integral aspects of any portable computing device. Through interviews with Bill archived in the Cooper Hewitt collection files, extensive documentation exists about the industrial design aspects of the GRiD, but little, if anything, was documented about its operating system and software. The software represents a significant piece of the history of interface design, but the only evidence remaining is housed on now-obsolete hardware. Unfortunately, forensic techniques commonly used in conservation (i.e. disk imaging) are not currently possible for this type of hardware.

Condition assessment: The GRiD’s unique internal componentry and data storage technologies include a form of non-volatile memory called magnetic bubble memory (of which it had 340 kb). Bubble memory not only stored user data, but also the GRiD Compass Computer Operating System (CCOS). Thus, accessing the bubble memory was a unique challenge of this assessment. We needed to devise a strategy for accessing, reading, and stabilizing the bubble memory to understand the inner workings of the GRiD computer. We turned to Ian Finder, a passionate collector and restorer of vintage computers—particularly GRiD Compass laptops. Ian joined us in New York, bringing with him a second working GRiD Compass and numerous accessories and peripherals. During Ian’s visit, we had two fundamental missions: 1) to access and stabilize the contents of Cooper Hewitt’s GRiD Bubble Memory, and 2) to learn why this computer was cataloged as a prototype.

Before powering up the Cooper Hewitt GRiD, we disassembled it in order to visually assess the condition of the internal electronics. We examined the power supply for the GRiD, which contains high-voltage electronics, including two very large electrolytic capacitors. One of these capacitors was found to be close to catastrophic failure—it was bulging significantly, nearly bursting. The liquid held in electrolytic capacitors is corrosive, and if this capacitor did in fact burst, the liquid it leaks would attack the components around it, as well as the Printed Circuit Board (PCB) itself. Left unattended, this would cause permanent damage to circuit paths on the PCB.

However, we determined that the power supply was identical to the one in the GRiD Compass Ian brought. We swapped out the power supplies temporarily, which would allow us to safely power on the Cooper Hewitt’s GRiD for the first time since its acquisition. The laptop powered on successfully at first, even displaying the GRiD logo, but could not read the operating system from the bubble memory. Despite extensive troubleshooting (and swapping around components to ensure that other parts in the Cooper Hewitt GRiD were in working order) we were unable to access anything in the GRiD memory.

What did we learn?: While we were disappointed to find that the bubble memory in the GRiD was inaccessible, it was not a total surprise. Bubble memory was a fringe technology, and little is known about its long-term durability. Regarding our second question, it now seems unclear whether this is indeed a prototype, given its identical configuration to the commercial model. This does not diminish its status in the collection as an important example of Bill Moggridge’s groundbreaking design work, but it may affect the way we understand its inherent vulnerability as it probably does not contain unique irreplaceable information.

Before reassembling the machine, however, we made one intervention. The computer contains a small battery, which is wired and soldered directly to the main PCB, near the bubble memory. This battery had not leaked, but since it was only a matter of time, the Cooper Hewitt team decided it was an opportune moment to remove it. Rather than desoldering, we simply clipped its leads.

At that time we were not prepared to perform any desoldering—a major, but safe and likely necessary preventive conservation measure.  None of the electrolytic capacitors were removed or replaced during our initial conservation assessment. But these components will eventually leak corrosive materials, and should be meticulously removed, otherwise they will certainly cause irreversible harm to the object.

Going forward: considering questions of authentic experience in an emulation display: Through this study, we have learned that displaying the original GRiD hardware in a running,functional state in a museum setting is simply not viable. This would place undue stress on the electroluminescent display (ELD), which, much like a cathode ray tube (CRT) screen, has a finite lifespan. Additionally, the public cannot be permitted to interact directly with the rare physical components of the GRiD Compass.

Although the GRiD’s hardware has significant historical importance, from the standpoint of user interface and interaction, the CCOS is equally demonstrative. The menu-driven interface represents a unique design, a missing link between command line interfaces and early, iconographic, graphical user interfaces. Luckily, there is already an emulator for the GRiD OS, that GRiD had made themselves, which runs in MS DOS, and which Ian has offered to provide for us (along with an archive of GRiD software).

With a working GRiD Compass emulator, the final consideration for exhibition is how the emulator would be rendered visually. In other words, the DOS emulator will run GRiD CCOS, but it will render it in the native white-on-black scheme of DOS. This will look and feel drastically different from the bright amber color of the GRiD’s display. DOS can be tweaked to better render the “look and feel” of the GRiD through the use of shaders, which in this case could reinterpret the display properties to capture the unique amber/orange screen of the GRiD for a new display used in our galleries.

Creation of this shader should rely upon photographic documentation from Cooper Hewitt, but ultimately the selection of an appropriate LCD screen should be made with side-by-side comparisons of the actual ELD. An organic light emitting diode (OLED) screen, possibly in collaboration with the aforementioned shaders, might provide sufficient brightness and sharpness to closely approximate the original look and feel of the GRiD Compass’s display.

Aside from carrying out the remaining recommended preventive measures (removing batteries and bulging capacitors), this case study provides us with an important research initiative to pursue: how will early computer screens be emulated in today’s galleries? The interface, and the visitor experience, are where software conservation and hardware conservation meet exhibition design.