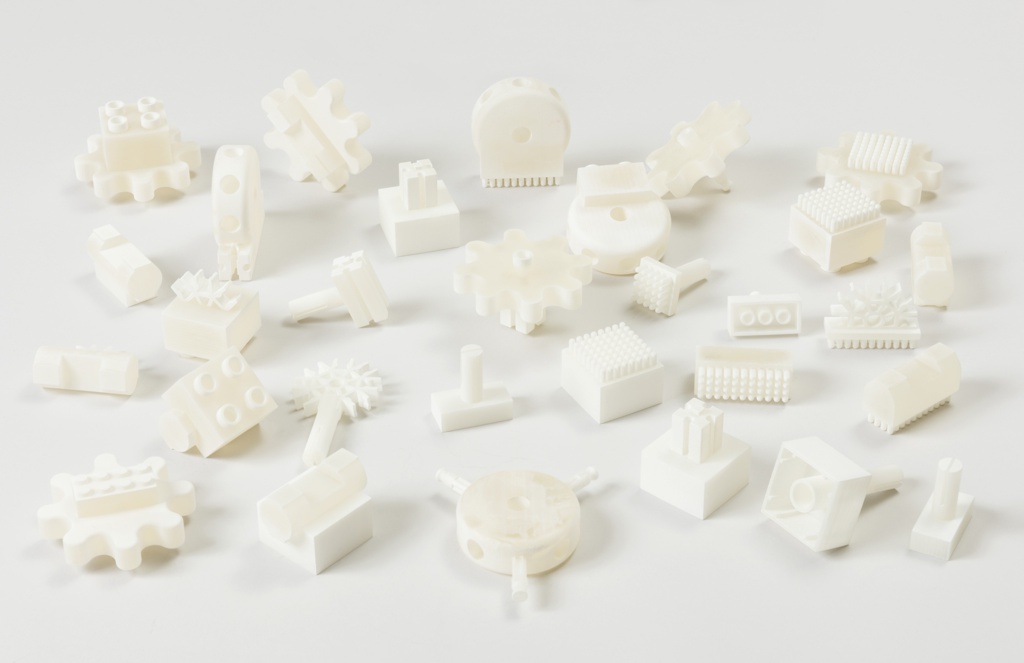 Golan Levin’s Free Universal Construction Kit is a 3D-printed set of objects that serve as adapters between ten different construction toy sets, and was featured in Cooper Hewitt’s 2014 exhibition Beautiful Users. In theory, the kit breaks down the proprietary barriers that prevent children from using many different kinds of construction toys simultaneously; for instance, allowing a Lego to be connected to a Tinkertoy, or a Duplo to a K’Nex. Levin published the digital files for 3D printing the kit on the blog of the Free Art and Technology (F.A.T.) Lab in 2012. The files are licensed under a Creative Commons License. This case study examines 3D printing, with an emphasis on the significant properties of this manufacturing method, as illustrated by our efforts to print a new object from the set.

When Cooper Hewitt acquired this set of Free Universal Construction Kit objects, we collected just that: the physical 3D-printed kit of pieces, and not the digital files required to print them. 3D digital files can be produced in many different 3D modeling programs. There are seemingly inumerable digital file formats for the purposes of 3D printing – DAE, X3D, X3DB, X3DV, and WRL, etc., the most common being OBJ and STL. STL (short for Stereolithography) describes the three dimensional structure of an object by breaking down the surface into triangular polygons. The STL file simply consists of a very long series of coordinates for these polygons. This is the file type used to create the Free Universal Construction Kit. There are many different methods of 3D printing. We’ll look at just the three most common.

3D-printed objects in museum collections could potentially allow for many different display options. In this case, we could use the 3D files (which were released publicly) to print new copies, as was intended by the designer. This could allow visitors to play with a kit in the galleries.

Condition assessment: Although the original prints are still in good condition (they are about 3 years old at this time), we wanted to look at the possibility of reprinting them at a later date to see what that would entail. While we did not originally acquire the files as part of the museum’s gift, we were able to source them from the designer (and they are available free of charge at: http://fffff.at/free-universal-construction-kit/).

Of the 48 STL files included in the kit, we chose to print the “universal” adapter, which consists of an icosahedron with various toy pieces attached. But which of the many methods of 3D printing should be used? As you will have gathered from the brief descriptions of the different techniques, they yielded drastically different outputs in different materials (and at drastically different costs).

For each technique there are many variables involved in how the 3D printer interprets the directions encoded in the original 3D file: without meticulous documentation on the original print settings, it is nearly impossible to replicate an “original” (an “artist print” or “designer print” ) at a later date. Using an intermediary program, the STL file is reformatted into directions for how to move the robotic printer head. Among these variables for fused filament printing are infill, density, and scale–you do not want confusion between printing at millimeter or inches scale! At this stage, additional supports are usually added to prevent distortion during printing. Unfortunately, consumer or hobbyist grade Fused Filament printers like the Makerbot Replicator 5 used for our test do not have very high resolution. It soon became clear that this method was unlikely to produce a useful print that could meet the tolerances specified by the toys it serves to connect. SLS and SLA printers are usually not for home use, and we contacted two commercial companies, Shapeways and GPI Prototype & Manufacturing Services, to print two more copies using these other methods. The “White Processed Versatile Plastic” of the SLS model has a rough matte texture, and we opted for no finishing services to allow us to assess the resolution of the Z axis. Most toys fit quite well on the SLS model—including Lego, which has the tightest manufacturing tolerance. There are some minor problems with fit that appear to be inherent to the files and not an artifact of the printing method. The SLA print from GPI had very few visible Z-axis / layer striations, except at the top half of the icosahedron. These striations were extremely fine, but rather visible, due to the way they caught the light. In real life tests, most of the pieces fit well on the SLA print, except for a few parts (especially Lego) which did not stay well connected due to the print’s smooth glossy finish. Going forward: conservation strategies for 3D prints: First we have learned that it is best practice to obtain the 3D files for any 3D-printed object in the collection, but not for the reasons you may think. 3D files serve as important documentation of the creative process. But they don’t offer an immediate solution to the problems of aging materials in museum collections and they come with their own preservation concerns. From now on, the museum will try to collect 3D files as supporting material, and archive them safely in common preservation-friendly file formats in the Smithsonian’s digital asset management system.

Another consideration is who should make the decisions about future prints. What happens after the artist/designer is no longer available? While the designer Golan Levin stated that SLA was his preferred printing method at the time of acquisition, we found the SLS print yielded a result that may actually be more “functional” than SLA, since some of the commercial toy pieces fit the SLS print better. SLS is also much more affordable than SLA, a significant factor.

Most artist-produced 3D prints in museum collections have significant additional finishing work, even if they come from a 3D printing producer instead of being printed at home or in an artist’s studio. Unlike mass-produced parts which may be manufactured with quality control mechanisms, works of art and design in museums are rarely tested against formal standards, instead being appraised for their aesthetic characteristics, and often with less regard for their strict reproducibility.

However, this case study serves as a corrective against some misunderstandings commonly reported regarding 3D prints in museums. If an original print is damaged or changed over time, it is not trivial to reprint a new copy. If and when Cooper Hewitt decides to produce a demonstration or replacement set of the Free Universal Construction Kit, based on our tests, we would estimate that printing the entire set would likely range anywhere from $1,500–$3,000, depending on material.

Further, new copies will never be exactly like the original, since the materials and methods used to print them are unlikely to be the same—in part due to the rapid evolution of materials and techniques in the field of 3D printing. New and better-resolution techniques may be available in the future, but they would not be suitable for reproducing a 3D print from the early days of 3D printing: much historical evidence would be lost in the upgrading of manufacturing equipment. In addition, as we’ve described, many micro-variables are involved in producing 3D prints, and slight differences in how the proprietary computer software interprets instructions or how a printer behaves day-to-day can have visible effects. We will continue to collect and preserve both 3D files and 3D prints in the collection, according to the best standards available in the conservation of contemporary materials.