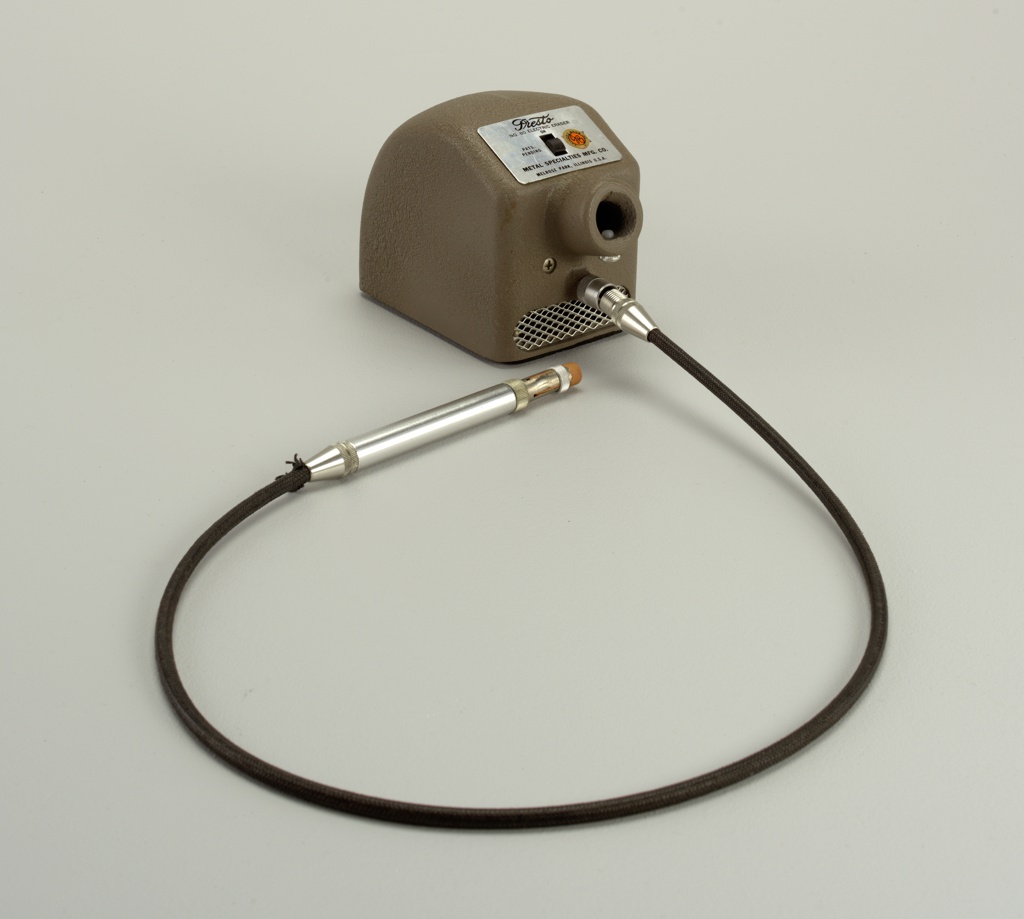 The Illinois-based office supplies manufacturer Metal Specialties Manufacturing Company first released a line of “Presto” products in 1939. Originally the line only included pocket and desk-sized staplers, but the firm would eventually create a wider range of products such as this electric eraser. This relatively simple and nondescript device allowed the user to store the eraser in the compartment on the front panel of the housing system. When needed, the user could plug the eraser into an outlet and turn the switch on, making the eraser vibrate. According to the instructions provided by Gaylord Bros., Inc., the library and archival supplies company that distributed the eraser, the user need not apply much pressure while erasing. The eraser’s electrical component would allow the user to erase at the same speed and efficiency as drawing or writing. Also, to increase ease and facilitate use, the eraser could be mounted to a wall.

The product appears to have been targeted towards offices in which considerable drawing or transcription took place. The Consumer Bulletin reviewed the product in February 1962, drawing attention to its convenience for “draftsmen, artists, [and] library workers.” In May 1962, the American Library Association Bulletin also highlighted the product, summarizing the Consumer Bulletin’s earlier article. The eraser received a mediocre review, with the tool’s short life span cited as one of its weaknesses. The article reads, “The Presto [Model 80] was found convenient for occasional small erasures, but for frequent use or for fairly large areas, the small-diameter eraser has a disadvantage because it wears away rapidly.”[1] Though electric erasers have a long history—they were invented by the architect Arthur Dremel in 1932—and still exist today, they have largely disappeared from most offices.[2] This may be, in part, because sometimes operations such as erasing are simply easier when done by hand.