A Mixed Bag of Historical Accuracy 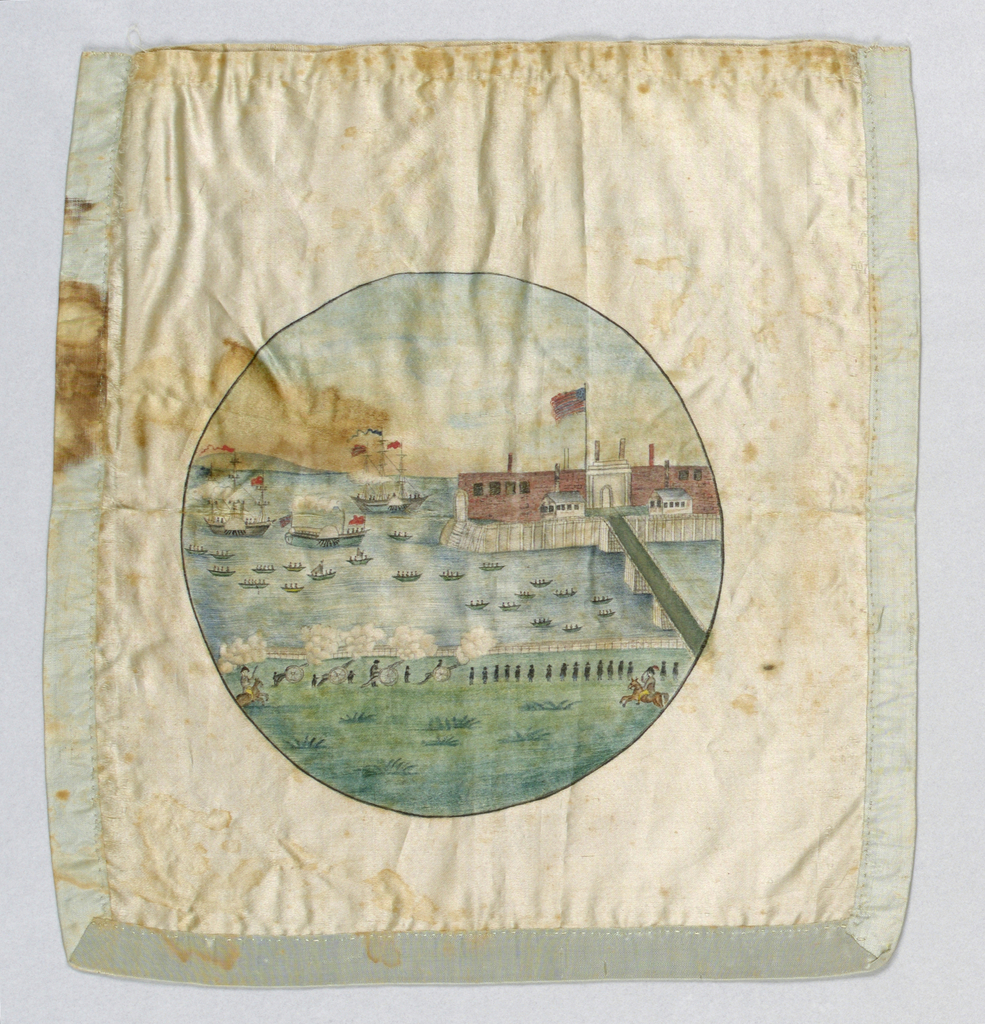 While this hand painted silk bag may seem like a simple fashion accessory, in reality it marks one of the most celebrated events in 1824 in the city of New York. On the backside of the purse there is an inscription that reads: “Landing of General Lafayette / at the Castle Garden New York / August 16, 1824.”

As the inscription states, the Marquis de Lafayette (1757-1834) landed at Castle Garden, now known as Castle Clinton, in what would mark the start of a whirlwind thirteen-month tour of twenty-four states. Lafayette had not returned to the United States after leaving in 1781 and this visit was set to celebrate his role in helping to win the Revolutionary War. By this time, the conflict was fading in the public memory and Lafayette was one of the last living figures who had fought in the war.[1] The commemoration of such a momentous tour created a frenzy for commemorative goods, including playing cards, gloves, waistcoats, and ceramics, most of which were adorned with his likeness.[2]

While these celebrations presented Lafayette as a mythic figure of a storied American past and blended fact and fiction, there are accounts of his landing at Castle Garden to compare with the painted silk image. One eyewitness described how the “aquatic procession then moved to the city, followed in the rear by the ship Cadmus, beautifully decorated, towed by two of the steamboats.”[3] August Levasseur, Private Secretary to Lafayette, recorded that “the sea was covered with boats of every sort, elegantly decorated with flags and filled with people,” painting a picture of the thousands of people gathered to greet Lafayette, and how they were accompanied by a military guard.[4]

Taking these observations into account, the painter of the silk bag translated these events into an accurate design. The composition is filled with boats, as well as part of the grand military welcome on the shore. While lacking the recorded number of crowds, the image proves to be a blend of fact and artistic fiction, making this item a fashionable and timely accessory.

Virginia Pollock is a Curatorial Fellow in the Textiles department at Cooper Hewitt, Smithsonian Design Museum, and a first-year graduate student in the History of Design and Curatorial Studies program offered jointly by Cooper Hewitt and Parsons School of Design.

← A Pill By Any Other Name…
Art Deco Masterpiece →

One thought on “A Mixed Bag of Historical Accuracy”

This illustration is most probably copied from a Staffordshire blue and white transfer printed plate.