A Pill By Any Other Name… 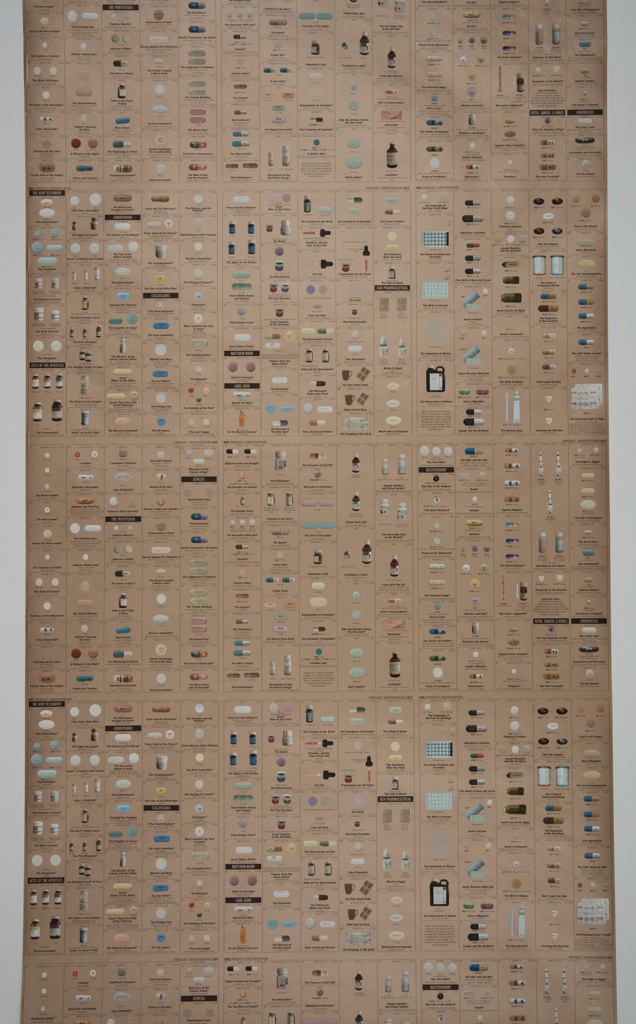 Posted by Gregory Herringshaw on December 14, 2018

Wallpaper is available in a wide variety of shapes and sizes, with a design, color, or texture to suit every taste. Leave it to Damien Hirst to throw some kinks into this usually conservative medium. This pharmaceutical design is an unusual theme for wallpaper but was very on-point for the restaurant for which it was designed. Pharmacy Wallpaper is the first wallpaper designed by Damien Hirst and was originally produced in 1997 for his Pharmacy Restaurant and Bar in the Notting Hill section of London. The restaurant closed in 2003, and the following year the paper was reprinted in a limited edition of 1000. The design format is based on the Physician’s Desk Reference, with each pharmaceutical shown along with its name and dosage, and Hirst has inserted a reference to a biblical passage under each listing.

As one might expect, the décor of the Pharmacy restaurant followed a pharmaceutical theme, with the art-filled interior designed by Hirst. Along with the wallpaper, the window displays contained pillboxes and hemorrhoid crème, the bar stools had seats shaped like aspirin, there was a molecular structure of Hirst’s DNA, and the cocktails were given names like Formalin Martini and Voltarol Retarding Agent. Even the ashtrays were shaped like pills, while the wait staff wore Prada surgical gowns.

Given the inclusion of “pharmacy” in the name and displays of pharmaceutical accouterments, the restaurant faced legal action by the Royal Pharmaceutical Society which claimed it might be confusing to a person in need of a genuine pharmacy. And while his initial venture did not last, Hirst has added a Pharmacy 2 restaurant to his personal museum, the Newport Street Gallery, which of course mandated designing a new wallpaper, Pharmacy 2.

Greg Herringshaw is the Assistant Curator of Wallcoverings.

← Let’s Clear the Air: The Rise of the Domestic Air Purifier
A Mixed Bag of Historical Accuracy →