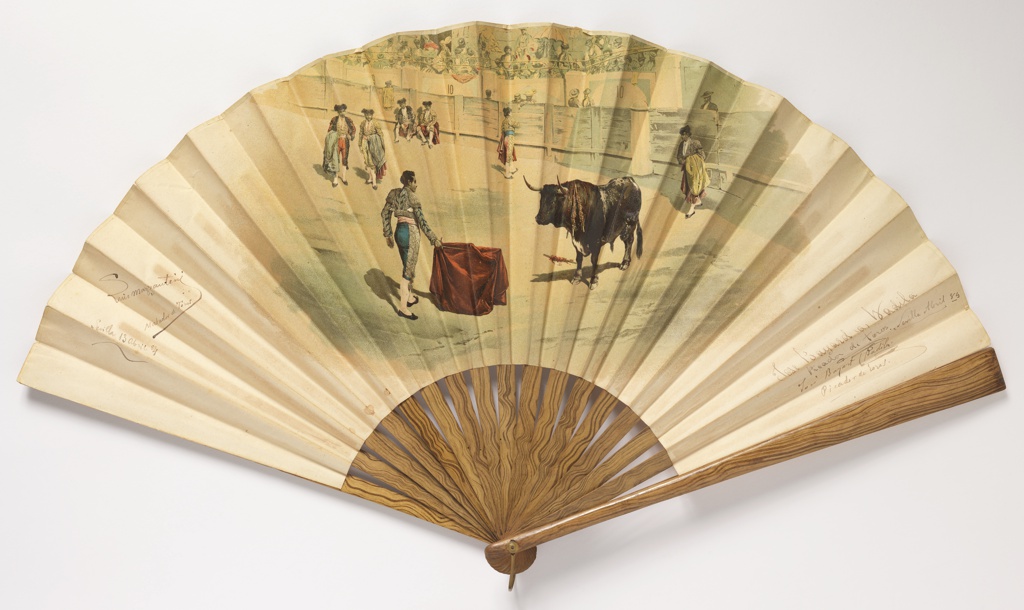 Posted by Kimberly Randall on December 10, 2018

Eleanor Garnier Hewitt (1864–1924) and Sarah Cooper Hewitt (1859–1930) gave identical Spanish pleated fans to the Museum for the Arts & Decoration at Cooper Union. Eleanor donated her fan in 1924 while Sarah’s came later in the form of a bequest in 1931 (acc. no. 1931-6-150). Both fans were signed in Seville on April 13, 1884 by the famous bullfighter Luis Mazzantini y Eguía (Spanish, 1856–1926). Mazzantini, also known as Don Luis, had a distinguished background for a bullfighter. With a bachelor’s degree in the arts and a career with the railroad, he came to bullfighting later in life and received the title of matador at age twenty-eight. He signed this particular fan one month prior to receiving his title or alternativa.

Two other signatures are by the picadores, one of whom was José Bayard Badila (Spanish, 1858–1906). The picador or horseman of the bullfight stabs the back of the bull’s neck with a lance while protecting his horse from injury. For his skill with the lance, Badila was nicknamed Iron Arm or Brazo de Hierro. Pleated fans printed with Spanish genre scenes were very common souvenirs in Spain in the second half of the nineteenth century. These fans offered visitors a romanticized version of Spanish life that depicted heroic bullfighters and carefree café scenes complete with musicians and dancing girls in ruffled gowns and mantillas. Whether the Hewitt sisters had these fans signed at a bullfight or received them as gifts is unknown.

Kimberly Randall is the Collections Manager for the Textile Department