Two Maidens and a Wreath 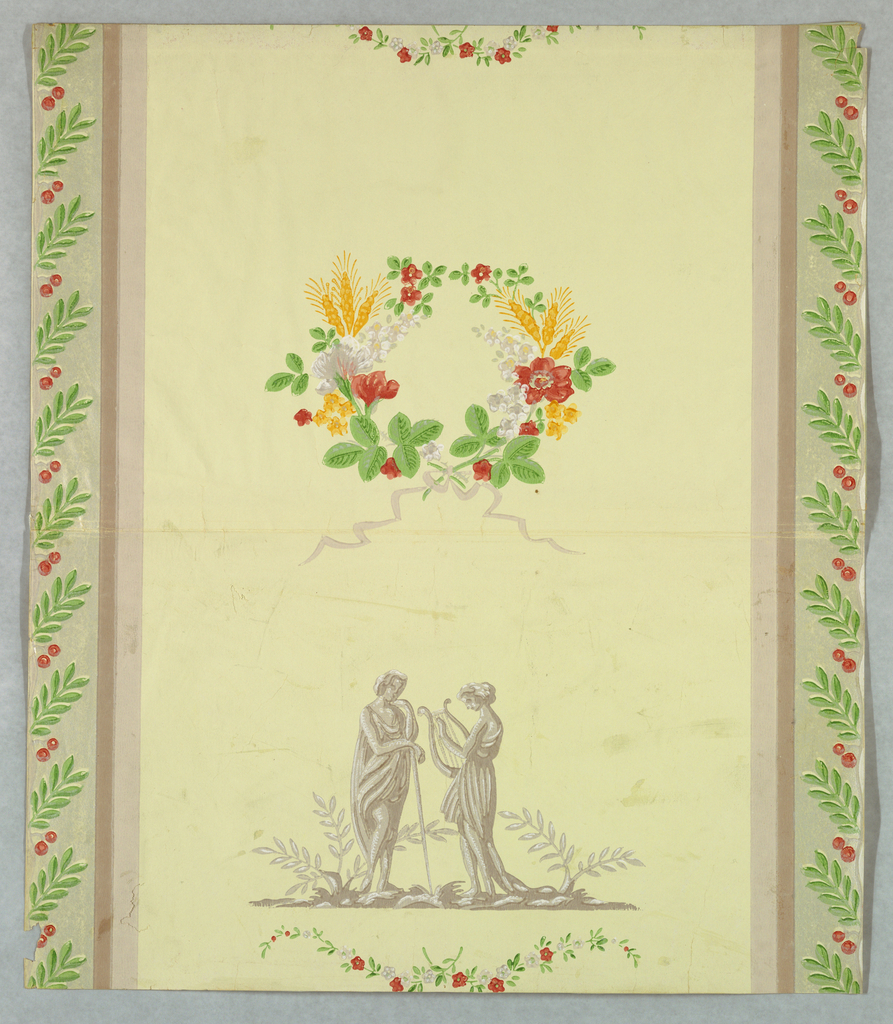 Posted by Gregory Herringshaw on December 3, 2018

This is a Colonial Revival wallpaper acquired during the tenure of the museum founders, Eleanor and Sarah Hewitt. This is a 20th century machine-printed reproduction of an early 19th century design. Given the contemporary date of this piece, and the crease across the middle of the paper, when received by the museum this sample was pasted into a scrapbook. The Hewitt sisters created a huge number of scrapbooks that made thousands of designs readily accessible to students and scholars, in pre-internet fashion.

This design copies a wallpaper in the neoclassical style that became popular during the reign of Napoleon, introduced around 1810. While the motifs and landscape scenes varied on different wallpapers, all the designs of this genre contained three elements: they had a primary motif alternating vertically with a secondary motif, they were all printed on a spotted background, and all had a vertical band running along the edge. On this design you have the two classically costumed figures on a landscape plateau alternating with the floral wreath. Given the floral swag above the wreath it appears this pattern only contains these two images. The original papers of this genre were woodblock printed and the better papers contained multiple primary motifs, so you might have the two figures alternating with an ancient ruin or a bucolic landscape view. This created a more interesting design and a larger repeat, while the limitations of machine-printing usually only allow an eighteen-inch repeat. While the designer did include the foliate band at the side they neglected to include the spotted background, suggesting they either didn’t understand the components of the original or were trying to “modernize” the design for current taste. Well, two out of three isn’t bad. I am also showing an exquisite French paper in this same genre produced 1810-1815 for your reference.

One thought on “Two Maidens and a Wreath”

How fantastic to find this object awaiting in my backlogged email. I’ve forwarded it to a colleague battling against presumption a similar discovered paper dates to the early C19.
As always, your provided information fleshes out how misconceptions can occur, and the difference between the two made more apparent by your judiciously included original interpretation. We in the true Period Design community are most grateful for your continually illuminating presentations!