A Priestess of Book Design 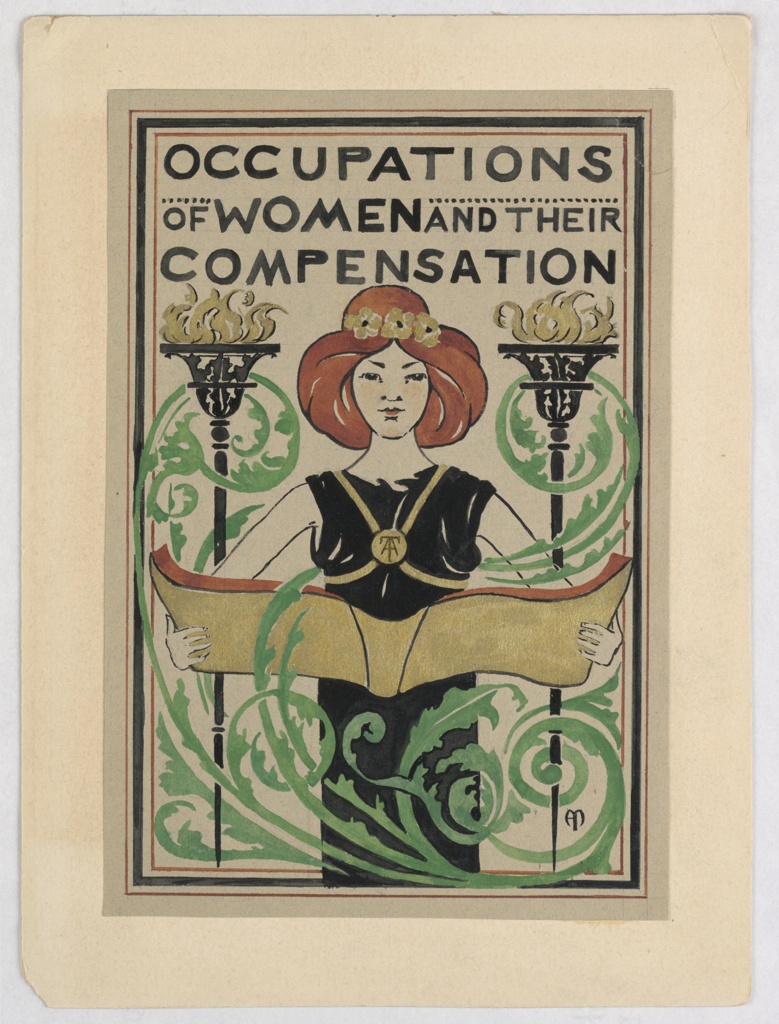 The career of Alice Cordelia Morse reflects the changing role of women in art and society in the late 19th century. Morse was able to achieve success in many artistic fields, designing book covers, illustrations, and stained glass, while also experimenting with other decorative media such as china painting and needlework. Although this title-page design was never published, it appears to have been intended for What Women Can Earn: Occupations of Women and Their Compensation (1899), a collection of essays on the various professions available to women in America. The design demonstrates the increasing sense of power and independence that women like Morse were experiencing as more career opportunities opened up for them.

The preface of the publication summarizes its content: “The nature of the work in each trade, the preparation required, the cost of training and apprenticeship, the need of economy of strength as well as of money, the places where instruction may be obtained, the best means of attaining success, and, finally, the probable remuneration, are explained clearly and sympathetically.”[1] Intended as a useful guide to help women make an informed decision about which occupation they should pursue and how they should pursue it, the book also conveys a sense of optimism about the position of women in society. The author of the preface observes, “nothing is more marked, at this time, in all parts of the country, than the fact that women with proper training are making themselves formidable competitors with men in a great variety of practical occupations, in which twenty-five years ago they were scarcely known, and in some of them actually displacing men.”[2]

During the late 19th century, the Aesthetic and Arts and Crafts movements were transforming the field of decorative arts and creating new work opportunities for female artists and designers like Morse. Morse attended one of the few art schools open to women, the Woman’s Art School of the Cooper Union, and studied with John La Farge, a master of stained-glass techniques. Morse then worked for the firm of Louis C. Tiffany, designing at least seventy stained-glass windows, before she left in 1889 to focus on book-cover commissions. She also decided to return to Cooper Union for postgraduate studies, and by the age of 29, she appears to have succeeded in supporting herself through her work; as the annual report for the Woman’s School notes, “A young woman reports $280 earned by making designs for book covers for Scribner’s, Harper’s, and others.”[3]

In addition, Morse chaired the Sub-Committee on Book-Covers, Wood Engraving, and Illustration of the Board of Women Managers for the Woman’s Building at the World’s Columbian Exposition in 1893. The exposition was the first fair to have a building dedicated to the accomplishments of women that was also planned and administered by women. Morse’s contributions included writing for the official guide, Art and Handicraft in the Woman’s Building, and the creation of an award-winning exhibition of her book covers inside the building. Morse’s career also involved work for the New York Society of Decorative Art, an organization that was committed to helping American women artists by sponsoring courses and providing a venue for exhibitions, lectures, and the sale of decorative goods made by women.

Morse was a prolific and successful creator of book-cover designs—she produced eighty-three covers for a variety of New York publishers, achieved widespread acclaim for her abilities, and participated in bookbinding exhibitions at the Grolier Club and Aldine Club. She was committed to the principles of the Aesthetic and Arts and Crafts movements, seeking to bring art to all aspects of everyday life. Morse helped elevate the status of the commercially-produced book through the application of diverse types of ornament—including Classical, Celtic, Arabic, Gothic, Rococo, and Art Nouveau motifs—to book design, taking inspiration from British designers such as Owen Jones, the author of the design masterpiece Grammar of Ornament (1856).[4]

The swirling, intertwining vines in this title-page design recall the plant forms used by William Morris in his textile and wallpaper designs. They overlap with the woman’s figure and wrap around objects as they move across the composition, conveying a sense of uninhibited growth and dynamic energy that resonates with the expansion of opportunities for women. Standing tall and composed, with a row of gold flowers crowning her red hair, and a gold medallion strung from bands at the center of her long, black dress, the woman resembles a powerful Celtic priestess. The large, gold book, held in a prominent position across her body, indicates a direct relationship between knowledge and power while alluding to the connection between books and the successful career of Morse herself. Framed on either side by tall, black torches with curling flames, the woman suggests the ability of all women to eternally achieve and inspire.

[1] What Women Can Earn: Occupations of Women and Their Compensation (New York: Frederick A. Stokes Company, 1899), iii.