Not Your Average Biscuit (Tin) 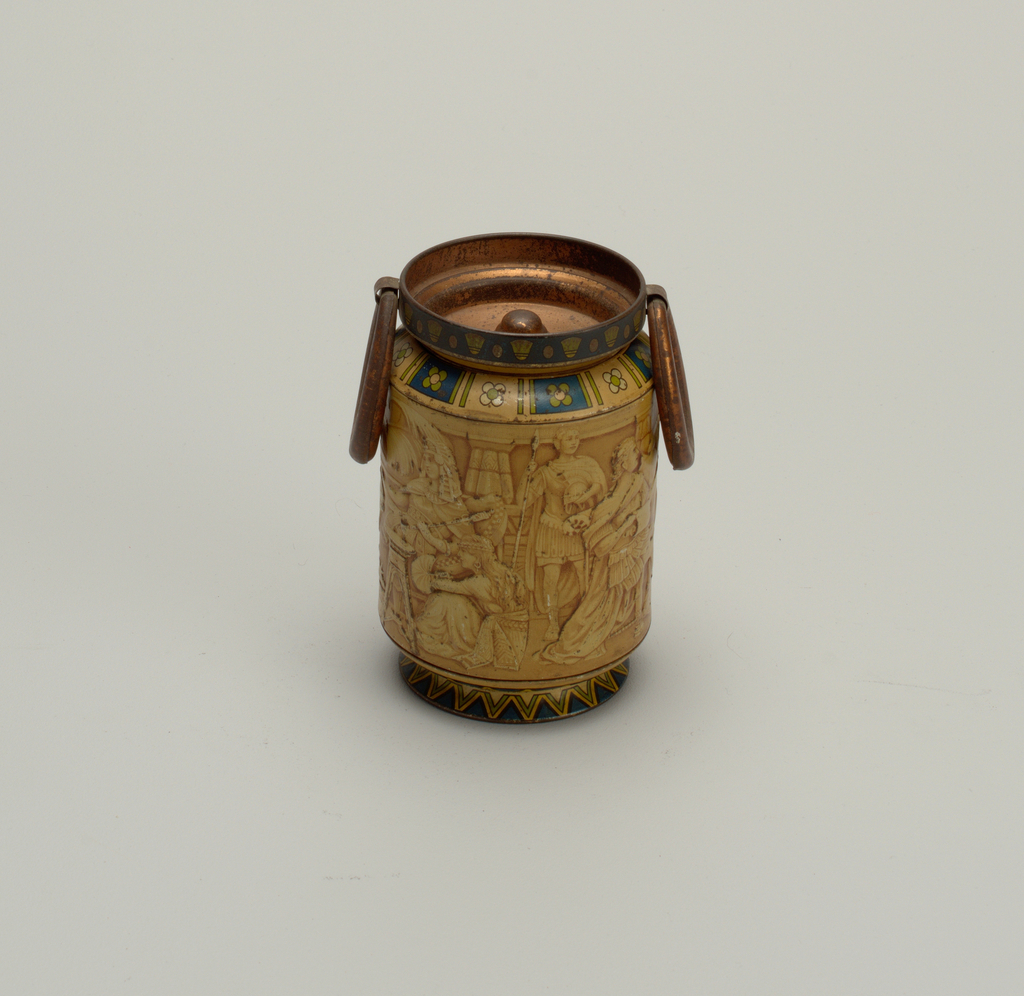 As part of Cooper Hewitt’s product design and decorative arts collection, this particular object is a rather unique representation of two historical elements: the design ingenuity of a British Quaker company that enjoyed tremendous success from its inception in 1822 onwards, and an architectural, decorative arts and design style known as the Egyptian Revival.

Huntley and Palmers is often credited as being the first company to introduce creative biscuit tins, manufactured by their division Huntley, Boorne & Stephens. The company became well known for their often highly imaginative biscuit containers, some of which were modeled after a stack of library books, an atlas globe, a fruit basket, or a grandfather clock. The proliferation of these fancy biscuit tins can be attributed to two factors: the passing of the Licensed Grocer’s Act in 1861, a milestone for British grocers such as Huntley and Palmers, because it meant that they were allowed to sell biscuits packaged in individual containers; and offset lithography, a printing technique that enabled images to be printed onto metal.[1] It is claimed that offset lithography also made it possible to print onto curved metal surfaces.[2]

It is interesting to look at this ornate biscuit tin and to realize that it once played second fiddle to the biscuits that it was designed to contain. The biscuit tin was never just meant to be a decorative item; the container came with an airtight lid, which served the purpose of protecting its delicious contents during travel and from decay. The tin’s references to the Egyptian Revival aesthetic are striking: the stylized floral and geometric patterns that wrap around the tin like a frieze on a Neoclassical building, the Greco-Roman and Egyptian-inspired figures, and even the round handles on each side of the tin.

Publications such as Owen Jones’ Grammar of Ornament (first published in 1856) [3], Denkmäler aus Aegypten und Aethiopien by Karl Richard Lepsius (published between 1849 and 1859), and The Nile Boat (1850) by William Henry Bartlett, to name but a few titles, as well as the Neo-classical pavilions at international exhibitions in London, Paris, Turin, Berlin, and further afield, as well as museum departments dedicated to Egyptian antiques, provided some of the important references to ‘Egyptianising’ visual elements that would have been familiar to a broad demographic during the Victorian era.[4] Even the popular satirical magazine Punch alluded to the popularity of the Egyptian Revival style by incorporating the movement’s motifs in its illustrations as can be seen below:

Given the amount of sources that made the Egyptian Revival aesthetic accessible to a Western audience during the 19th century, it is perhaps in no way surprising that something as ordinary as a biscuit tin could become a display vessel for the design movement. And like the many Victorian artists whose work clearly drew inspiration from Egyptian Revival, although they themselves had never been anywhere near Egypt or its environs [5], people who enjoyed Huntley & Palmers biscuits had a chance to encounter ancient Egypt in Victorian daily life without ever having to travel – or even step foot in a museum. An experience that at least in some ways surely transcended the imagination and the taste buds.

Zenia Malmer focuses on the intersection of food and design history, and is interested in bringing her research to life in experimental and sensorially engaging ways. She is a volunteer in the Product Design and Decorative Arts department. @hungry.historian

[3] Fun fact: Owen Jones was responsible for the design that graced the very first printed biscuit tin that appeared in Britain. http://www.vam.ac.uk/content/articles/a/a-higher-ambition-owen-jones/ In fact, he also created the square Huntley and Palmers logo that is still used up to this day. http://www.eyemagazine.com/feature/article/tightly-packed

[4] James Stevens Curl, The Egyptian Revival: Ancient Egypt as the Inspiration for Design Motifs in the West, (London and New York: Routledge, 2005), p.318

Curl, James Stevens. The Egyptian Revival: Ancient Egypt as the Inspiration for Design Motifs in the West. London and New York: Routledge, 2005.