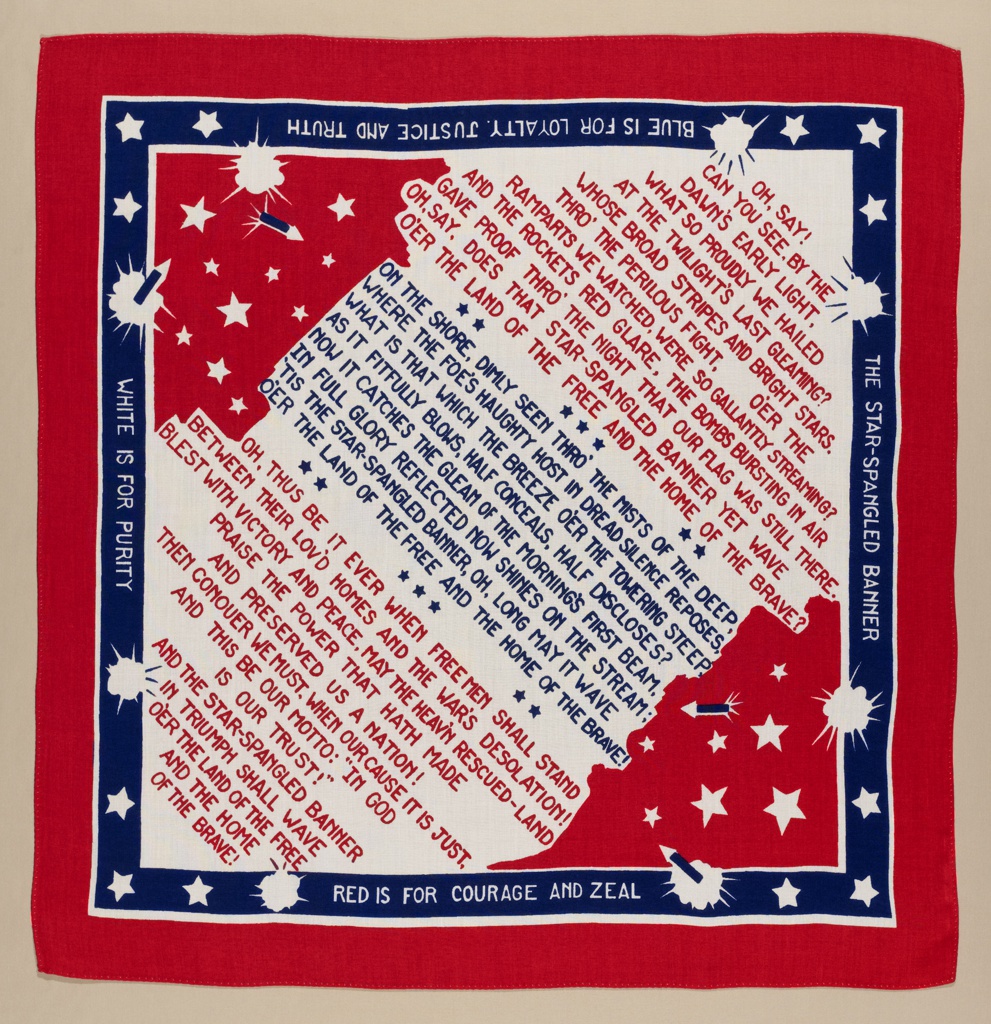 This rayon handkerchief, dated 1941, is printed with verses one, two, and four of The Star-Spangled Banner, and bordered with descriptors of the red, white, and blue’s symbolism. It is the epitome of the patriotic, propagandistic merchandise that characterized the years prior to and during the United States’ involvement in World War II.

Throughout the 1920s, a number of factors primed Americans to expect and accept an inundation of advertisements, enticing them to buy, buy, buy the mass-produced commercial products suddenly available as a result of industrialization. Simultaneously, research was underway by several prominent psychologists into the role of propaganda and its influence on public opinion and societal behaviors. This exposure to mass advertising—for the first time—and propaganda research laid the groundwork for the government propaganda campaign of the 1930s in support of such Depression-era government agencies as the Works Projects Administration and the Federal Art Project. [1]

As the 1930s progressed, Americans watched the European realities of World War II from afar, primarily through the lens of magazines and Hollywood productions. [2] When the traditional European centers of the fashion world crumbled, the United States took on a new role as a fashion leader, and the “easy going American Look” —including accessorizing with scarves and handkerchiefs—was popularized. [3] This fashion sense—even prior to the United States entrance into the war—reflected the austerity of the war when it was no longer stylish to get “dressed up” and utility and hard work were celebrated. [4]

Propaganda merged seamlessly with advertising during the war years, linking domestic manufacturing—whether actually related to the war or not—to supporting the American cause. This mission was formalized through the War Advertising Council. [5] Patriotism was used as an advertising strategy for absolutely everything, and patriotic motifs and slogans appeared on everything from product packaging to textiles, such as this handkerchief.

Meanwhile, the United States government had its own propaganda campaign underway. Like the advertisers, the government propaganda centered on patriotism. However, rather than consumer consumption, its goals were boosting morale on the “Home Front” and military recruitment. Much of this government propaganda focused around uniting Americans across racial divides and portraying people from different backgrounds working together for the good of the country. [6]

In this context, it is not surprising that the third verse of The Star-Spangled Banner is absent from this handkerchief. The third verse of the national anthem, of course, includes the line “no refuge could save the hireling and slave from the terror of flight or the gloom of the grave.” By deleting this content, the handkerchief can maintain its position as a patriotic unifier of all Americans, rather than alienating a core group being targeted for military recruitment.

← Auspicious Symbols
Space Walk With Me →