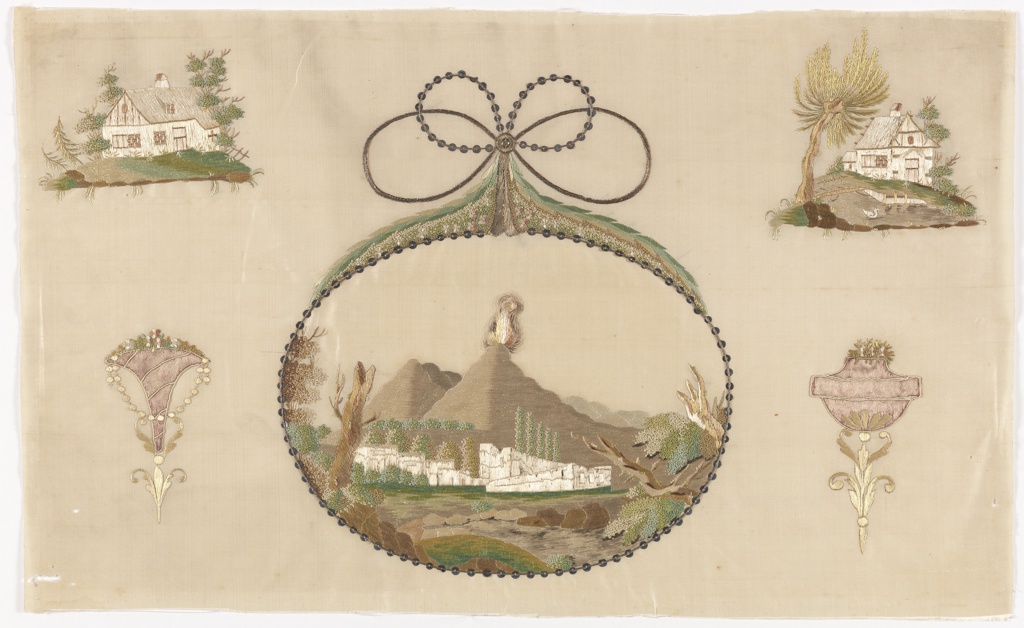 Designer Johann Friedrich Netto (German, active 1795–1809) included professionally stitched samples in his pattern book Zeichen-Mahler und Stickerbuch zur Selbstbelehrung für Damen, Zweiter Theil, published in 1798. This book, along with his first volume of embroidery patterns, published in 1795, and a later book of designs for knitting, all follow a format of presenting the designs in both color and black and white. It was an unusual feature for a needlework pattern book to include actual embroidery.

This silk and metal-thread embroidery sample matches the first stitched sample found in copies of Netto’s 1798 book, which is held by both the Metropolitan Museum of Art and Winterthur Museum. [1] While it is possible that one of Netto’s readers stitched this piece using his pattern, the fact that it is nearly identical in execution and materials to the ones within the extant pattern books suggests that this one became separated from its binding. Netto’s use of mixed media and hand coloring would have made these high-end books desirable to collectors. Even so, in this case, use would have taken a toll (ie: removing the black and white pages to use for transferring the pattern to the ground fabric), resulting in loose leaves like this sampler, and explaining the rarity of the embroidery books today.

The colors of the silk threads have faded, and the silver threads and paillettes (flat sequins) have tarnished, diminishing the shading effects and details. The smoke at the peak of the volcano is painted on the ground fabric. This representation of Mount Vesuvius erupting is similar to landscape paintings of the end of the eighteenth century, such as Anne-Louis Girodet de Roussy-Trioson’s A View of Vesuvius from Naples, 1793-94.

The tragedy of Pompeii captured the imagination then as now, and the art of embroidery has always reflected the broader artistic tastes of the period. Traditionally considered women’s domestic craft, the popularity of realistic pictorial embroidery brought unusual public attention to the needle-artwork of Mary Linwood, an embroider active in England between 1790 to 1820. [2] Linwood was known for her reproductions of Old Master paintings, including landscapes, which she recreated in stunning detail in wool embroidery. [3]

Lisa VandenBerghe is an independent researcher interested in women’s domestic craft with a focus on needlework pattern books produced between the seventeenth and eighteenth centuries.

One thought on “Vesuvius in Silk”

A View of Vesuvius from Naples