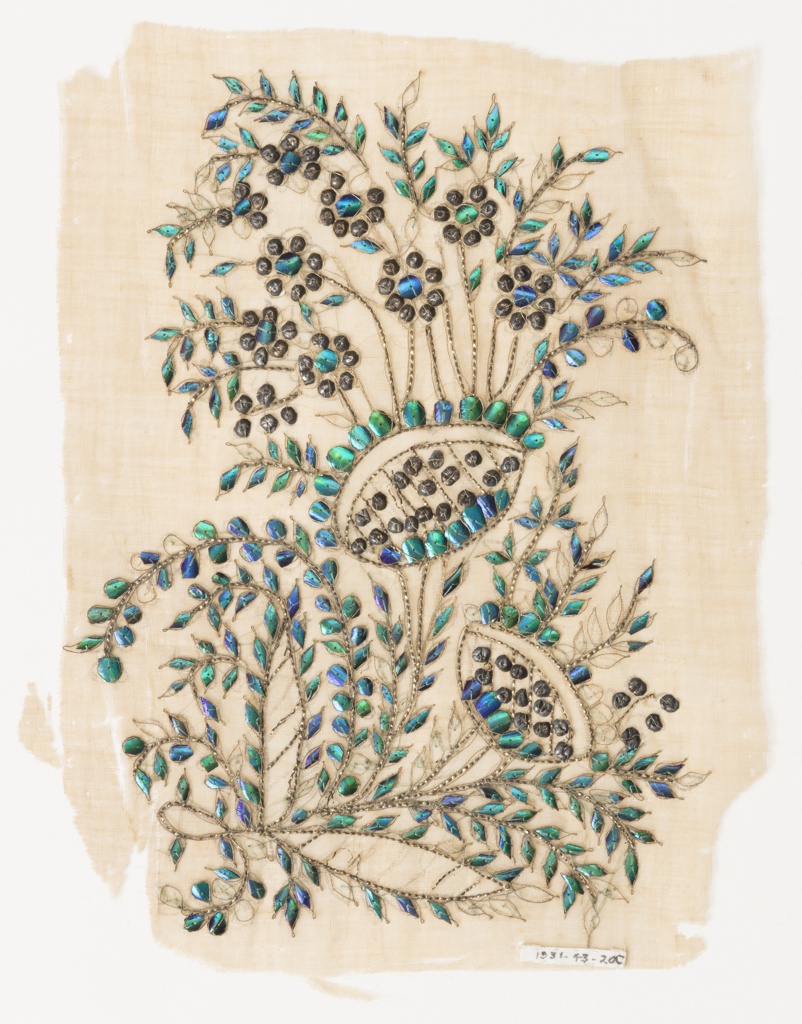 In 1888, renowned Shakespearean actress Ellen Terry appeared on stage as Lady MacBeth in a show-stopping glittering costume embellished with a thousand green metallic beetle wings (elytra). The spectacle was so arresting that it was later immortalized by painter John Singer Sargent in a now iconic portrait of the actress. More than a hundred years later another actress, Charlize Theron, donned a dress likely inspired by Terry’s to portray the evil queen in the film Snow White and the Huntsman. All jagged angles and embellished with shining green elytra, the dress radiated the queen’s envy, menace and power.

Human beings are attracted to shiny things. Such objects suggest luxury and wealth, so it may be surprising that a shimmering gown is in fact embellished and embroidered with the wings of a lowly insect. Beyond butterflies, insects are not well loved, but they make up nearly 80% of the world’s animals. Among some 900,000 insect species thus far identified is a family of beetles (Buprestidae) aptly named jewel beetles. These insects are nature’s sequins. Sternocera aequisignata, named by British entomologist Edward Sanders in 1886, is the species most often used for beetle wing embroidery. The insect has a wide range stretching through India and Nepal and eastward to Southeast Asia.

During India’s Mughal period (1526-1756), beetle elytra were used to adorn jewelry, textiles and ceremonial objects as a declaration of high status. Later traders brought embellished textiles from India to Europe where the shimmering cloth enjoyed great popularity, particularly in the Victorian era. This was a time when the exotic was truly appreciated and celebrated, most notably in the form of hats bedecked with feathers and even whole tropical birds. According to the October 1863 issue of Godey’s Ladies’ Book, ‘The ornithological and entomological fevers, which broke out last spring, will continue with increased violence throughout the winter.’ Very interesting choice of words!

Typically the beetle elytra were cut, shaped and applied in floral designs to white cotton muslin cloth. Relatively strong due to the elytra’s rigidity, beetle wing embroidery most often adorned the sleeve edges and borders of gowns. The elytra were attached to the cloth much like a modern day sequin, with smaller pieces held down by overlapping silk threads. In addition to the iridescence of the beetle wings, metallic threads were used for the embroidery to create the overall glittering effect.

Today, beetle wings still adorn headdresses, textiles and baskets of many minority groups in Southeast Asia, most notably the Pwo Karen (Myanmar, Thailand) and the Naga of Northeastern India. In 1985, Queen Sirikit of Thailand donned a jacket and matching shoes embellished with beetle elytra on a state visit to the USA. Beyond the fragment in the Cooper Hewitt’s collection, you can see more beetle wing embroidery in Bangkok at the Queen Sirikit Museum of Textiles adjacent to the Grand Palace, and at the Victoria and Albert Museum in London, England as well as many museums in India. In 2011, Ellen Terry’s famous beetle wing dress was restored and put on display at Smallhythe Place in Kent, Terry’s last residence before her death and now operating as a museum.

Jennifer Angus is an artist and professor in the Design Studies department at the University of Wisconsin, Madison. She is known for her site-specific installations made from sustainably harvested insects arranged in ornamental patterns.

One thought on “Nature’s Sequins”

Ellen Terry was best friends with Evangeline Blashfield, the wife of the painter of the dome in the Library of Congress, Washington DC.

In fact, Both Evangeline’s and Ellen Terry’s portraits are representations of aspects of the History of Civilization in the painting.