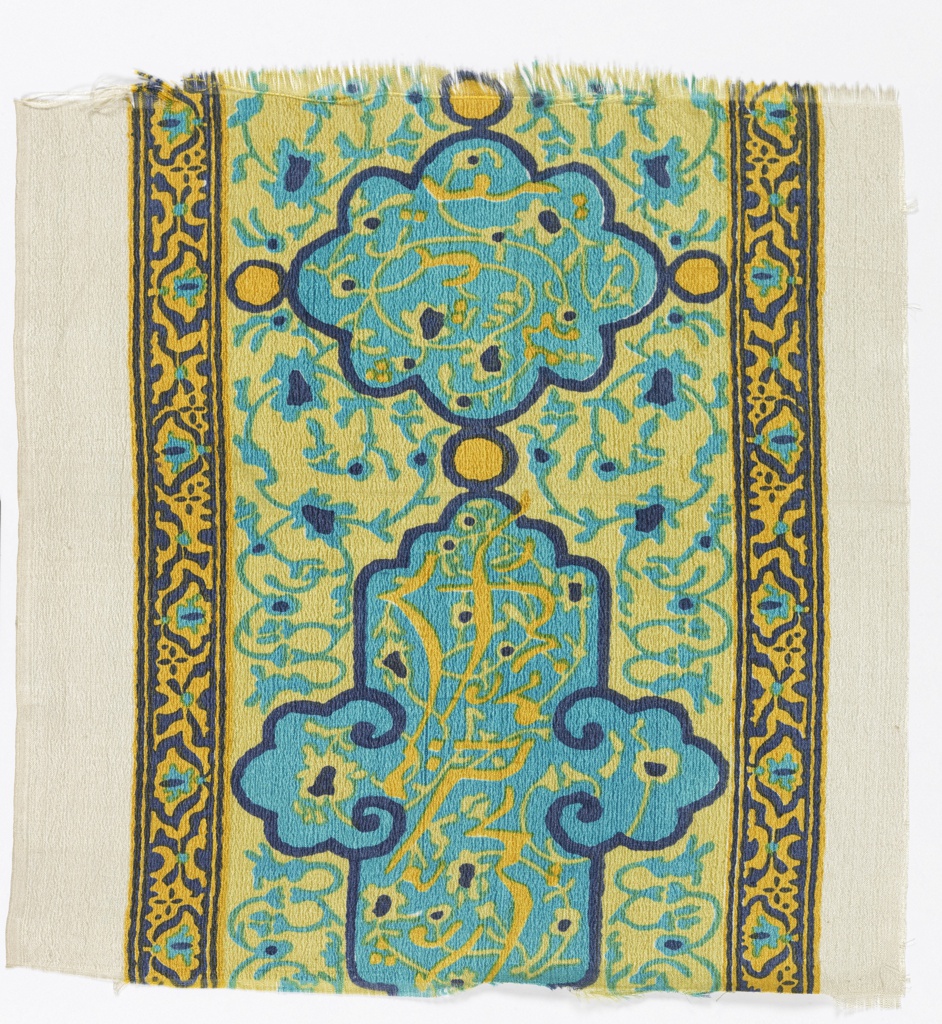 This printed dress silk, one of five samples donated to the museum by Duplan Silk Company in 1918, suggests the cosmopolitan interest in art and design from around the world that was characteristic of the American fashion industries in the early 20th century. The designs, each each brightly colored, with stylized motifs, are clearly inspired by the arts of other cultures – Islamic style ceramics, Egyptian wall paintings. The company that gave them also donated additional samples of its products from the 1920s, of silks patterned in the weave, in 1931.

The Duplan Silk Company was, for a short time, one of the top manufacturers of silk fabrics in the United States. Jean Duplan owned a silk weaving mill in Lyons, France, in the late 19th century, and when the U.S. Congress imposed high import duties on European-made luxury goods, through the US Tariff Act of 1897, Duplan faced the loss of the lucrative American market for high-end silk fabrics. Like many other textile manufacturers in Britain, France, Germany, and Italy, Duplan chose to open a new mill in the U.S., taking advantage of modern machinery and manufacturing methods to make fabrics that were similar to his French-made products, while avoiding the tariff and shortening the lines of communication between manufacturer and consumer.

Like many silk manufacturers around the turn of the 20th century, Duplan chose to build his mill in the anthracite coal-mining region of Pennsylvania, in Hazleton in 1898. Since mine work was often irregular, families could not rely solely on the head of household’s earnings. Textile mill wages in this region were lower than in the unionized mills of New Jersey, New York, Connecticut, and Massachusetts, but became an important addition to a family-based income.

The Duplan firm went against the usual pattern of employment in this region, however. The company’s integrated manufacturing incorporated many processes which required a skilled labor force: producing silk velvets, formulating its own dyes, and printing fabrics in its own mill. At its height the company owned five mills, all in Pennsylvania. Duplan’s French background and contacts gave him access to the most fashionable Parisian designers, and judging from the samples the firm donated to the Cooper-Hewitt, and to the US National Museum, the company’s work was of high quality both in design and execution. Jean Duplan sold the company to investors in 1921, at which time it became a publicly traded corporation. The Hazleton, Pennsylvania mill closed in 1953.

One thought on “French Silks from Pennsylvania”