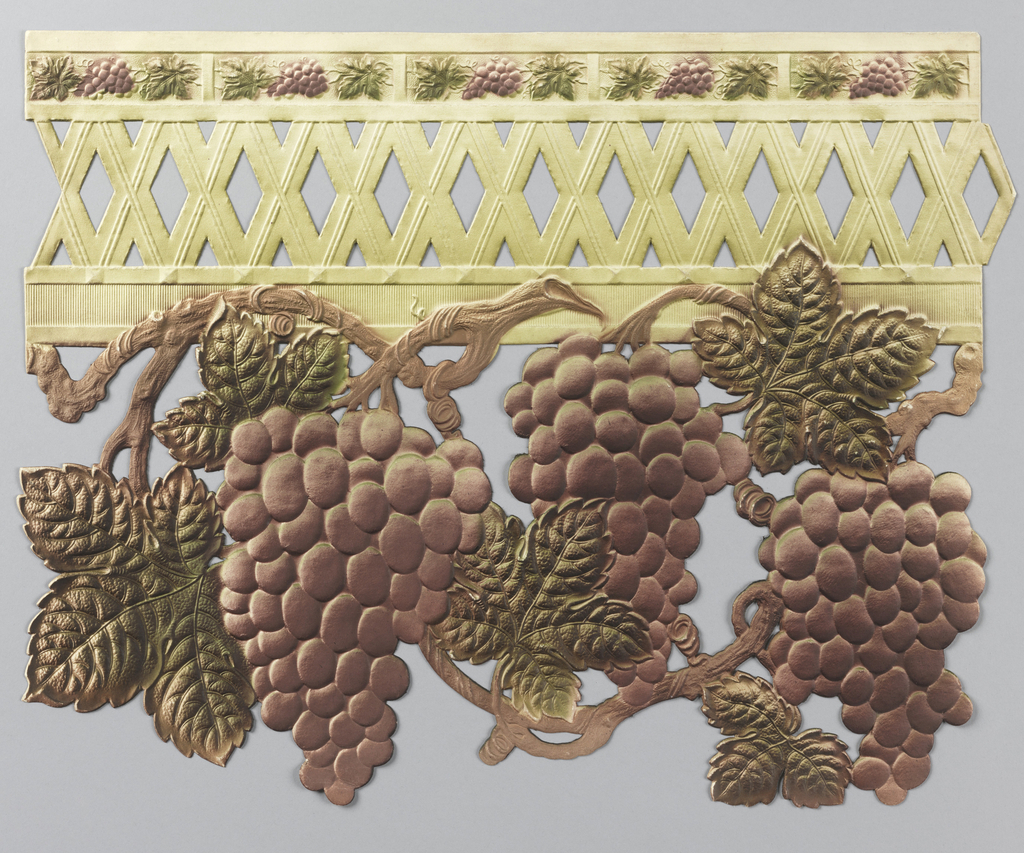 Presenting an unusual wallpaper border that reflects both the current wall fashion and the use of new technology. This paper border is embossed and die-cut, with many open or pierced areas within the design. The border consists of large bunches of purple grapes hanging on the vine with green-colored foliage. The vine is suspended from an openwork trellis, above which are inset panels with more grapes and foliage. The embossing is quite crisp allowing for a great amount of detail, while the printed design appears to have been air-brushed. The piece shown is a single repeat with the different sections fitting together rather like a puzzle, as the diamond shape at the beginning and end of the trellis fit together. These borders were usually printed in pastel or neutral colorways, with this grape pattern being one of the strongest colorings.

Borders with the bottom edge cut out around the printed design were popular from about 1905-1920. The intent was to soften the harsh edge that usually resulted where the border meets the wallpaper. The embossed and die-cut borders took this a step further, by piercing the border design more of the wallpaper is allowed to show through, creating an even softer blend between the two papers.

The embossed die-cut borders followed shortly after the printed cut-out borders as the stamping technology developed. The die-cut machine was first used by shoemakers in the mid-nineteenth century to cut out shoe soles. Further developments in the early twentieth century allowed the machine to be adapted for cutting out single layers of paper.

Greg Herringshaw is the Assistant Curator in the Wallcoverings department at Cooper Hewitt.

← A Lasting Remnant of a Friendship
A Dream Come True →

2 thoughts on “Die-cut to Perfection: New Trend in Borders”

I was Production Manager at Arthur Sanderson & Sons when the diecutting of border was carried out on a surface printing machine.
In 1996 we produced die-cut borders using both paper and self adhesive vinyl.
I will look out samples to photograph