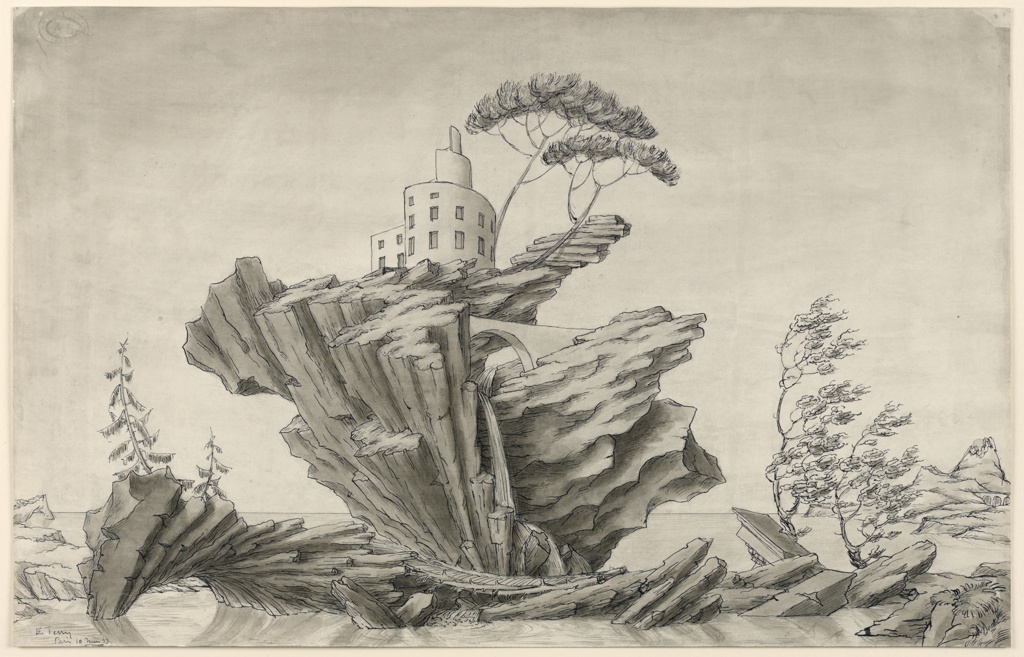 Emilio Terry once described his creative work as “a dream come true,” an attitude reflected in his 1933 pen and ink sketch, Fantasy.[1] Although perhaps less familiar to modern audiences, Terry was one of the best-known designers of his time. Born to a wealthy family in Havana, Cuba, he later moved to France, where he lived and worked primarily in Paris.[2] In the 1930s, Terry became an influential presence in the city’s elite social and artistic scenes, in part due to his close friendships with leading surrealist artists, including Salvador Dalì. Although trained as an architect, Terry worked across many media, including furniture design, sculpture, painting, and drawing. He was especially well known for his interiors, which often combined classical, baroque, art deco, and surrealist motifs in a style he dubbed fictional “Louis XIX.”[3] Terry’s work is flexible, spanning many categories and often falling between sculpture and architecture, drawing and painting, reality and fantasy.

Juxtaposing rough cliffs with creamy man-made architecture, Fantasy integrates potentially buildable structures into an otherworldly landscape. Applying his “dream come true” approach, Terry brought the drawing’s two-dimensional architectural concept into the real world by building a three-dimensional model. This 13-inch model house became known as “el colimaçon” (“The Snail”) because, following the drawing’s design, it winds upward in the shape of a nautilus.[4] The model was featured in the Museum of Modern Art’s 1936 “Fantastic Art, Dada, Surrealism” exhibition, and was highlighted in the December 1936 issue of Life Magazine.[5] The exhibition also included floor plans for “The Snail,” suggesting that the designer may have seriously considered the building for construction. Terry’s intentions in this regard may never be revealed, but even with the structure unrealized, his impact on design continues to be felt today.

Noelle Kichura is a candidate in the MA History of Design and Curatorial Studies program offered at Parsons The New School of Design jointly with Cooper Hewitt, Smithsonian Design Museum.