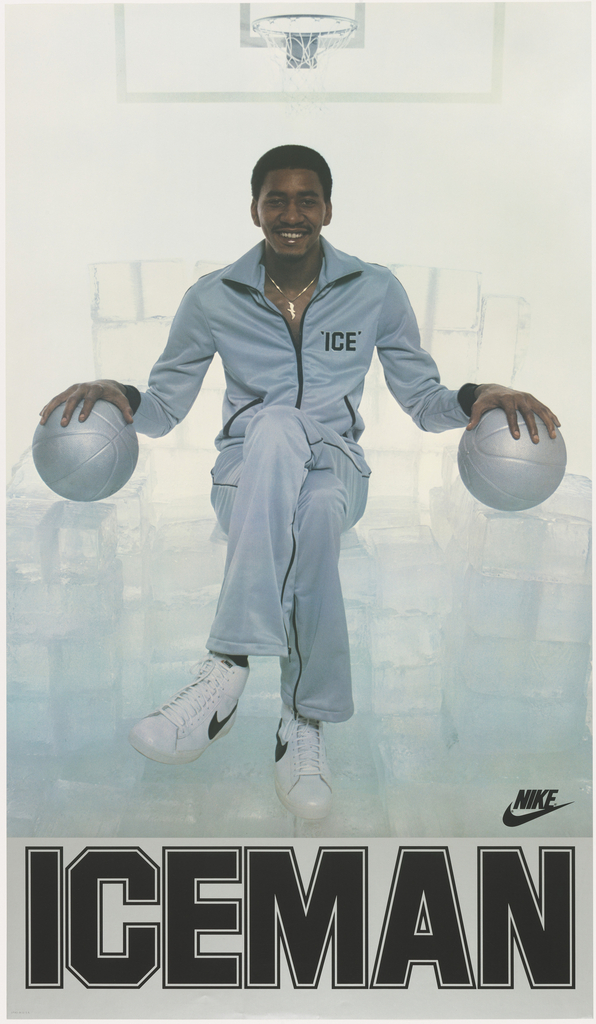 Basketball star George Gervin never broke a sweat because he stayed cool under pressure. At least that’s what his teammates Julius Erving and Fatty Taylor thought when they nicknamed him “Iceman” in the early 1970s. But according to Gervin, his ability to remain dry throughout a game had nothing to do with a calm demeanor. “I was 155 pounds with no water in me,” Gervin, who is 6’ 8”, would later recall. “People thought I was Ice because I was cool. Nope. It was because I was skinny.”[1]

It was more than his slender frame that kept George Gervin’s reputation as the “Iceman” undisputed.  Gervin possessed a grace on the court and a delicate shooting touch that belied its strength. By the 1977-78 NBA season, Gervin was leading the San Antonio Spurs and dueling David Thompson of the Denver Nuggets for the NBA scoring title.[2] He was also in his first year of a contract with Blue Ribbon Sports, a footwear and athletic apparel company that was in the process of changing their name to Nike.[3] Gervin was making a splash in his second NBA season, but he was not yet a household name. “I just do my thing and stay consistent,” he told Sports Illustrated reporter Curry Kirkpatrick in a March 1978 profile. “I figure the people be recognizing the Iceman pretty soon now. Whereas I be up there in a minute.”[4]

On the final day of the season, the race for the scoring title was the closest it had ever been—only 14 points separated Thompson and Gervin. [5] In a dramatic showdown, Thompson scored 73 points against the Detroit Pistons, and it pushed him into title position…for the next seven hours. But that same evening, the “Iceman” scored 63 points against the New Orleans Jazz, securing the title. Overnight, George Gervin was “up there.”

As Gervin was playing through his record-breaking season, Nike was making their first foray into professional advertising with the firm John Brown & Partners, a Seattle-based agency.  John Brown & Partners launched Nike’s first campaign with the iconic “There Is No Finish Line” tag line in 1977, and they followed it up in 1978 with a series of “personality posters,” intended to capture the unique qualities of celebrity athletes. [6] Art Director Denny Strickland photographed Gervin seated on a frosted basketball court atop a throne of ice, with a silver basketball in each hand. Gervin’s custom silvery-blue track suit was emblazoned with his moniker, “ICE,” and his feet were tilted to highlight the iconic black Nike “Swoosh” on his white high-top sneakers. [7] The “Iceman” wore Nike, and that was advertisement enough.

Gervin’s perch atop an icy throne remained, figuratively speaking, for years to come. For a time, he was the record holder for “most scoring titles of any guard” in NBA league history. Today, Gervin dedicates his time to the community of San Antonio. His popularity, and the emergence of Nike’s powerful branding campaigns, live on in this poster.

[7] The Nike “Swoosh” logo was designed in 1971 by Carolyn Davidson, who was a student at Portland State University at the time. For more information, see: “The $35 Nike Logo and the Woman Who Designed It.” Creative Market. May 02, 2016. Accessed July 02, 2018. https://creativemarket.com/blog/the-35-nike-logo-and-the-woman-who-designed-it

← Suburban Living
Turtles All the Way Down →