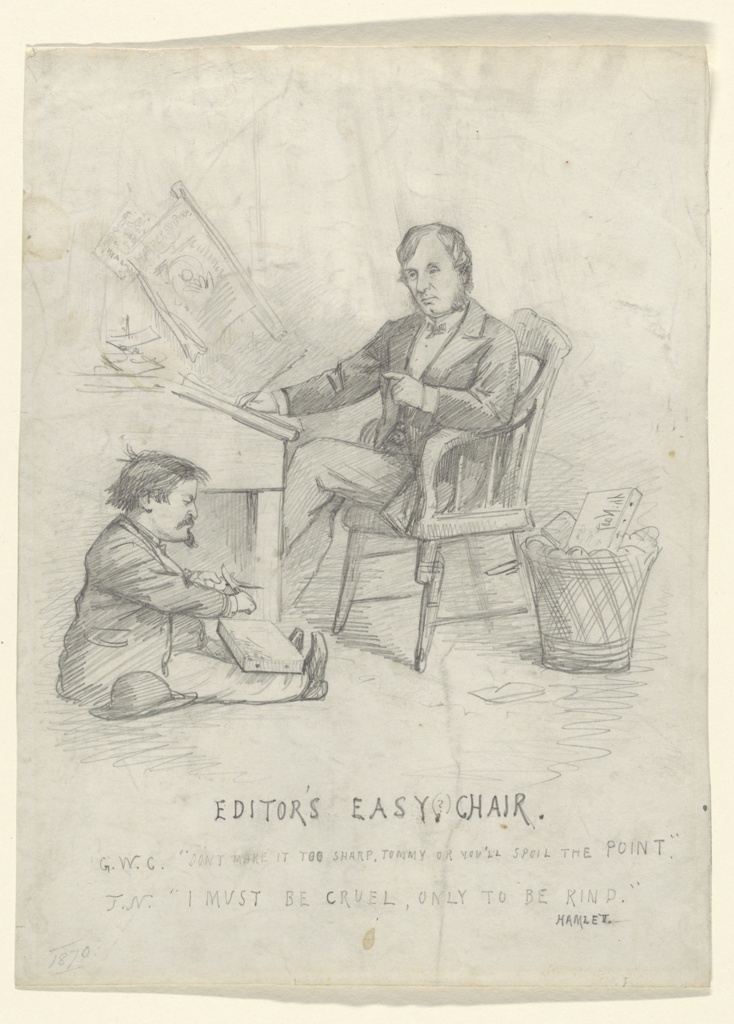 Today discussions concerning the divisive power of political rhetoric are being addressed throughout the national media. This drawing captures a pivotal moment in nineteenth-century American history that juxtaposes a similar debate. Thomas Nast (1840-1902) joined the staff of Harper’s Weekly in 1862 and his drawings of the Civil War established his reputation. George William Curtis (1824-1829) was appointed political editor of Harper’s Weekly in 1863 and contributed monthly to a column in Harper’s Magazine, titled Editor’s Easy Chair. During a tumultuous period of warfare and Reconstruction, Nast was responsible for the paper’s political cartoons while Curtis wrote editorial essays and social commentary. Their political positions were aligned, yet Nast’s radical satire and scathing caricatures were often viewed in opposition to Curtis’s restrained and conservative manner.

In this drawing, dated April 19, 1870, Nast uses his wit and sense of melodrama to comment on political discourse in the American press. Curtis is seated in his editor’s chair with the latest editions of Harper’s Weekly hanging on racks behind him. His attention is being pulled between writing with his right hand and raising his left to scold the child at his feet. With closer inspection, it is not a child but a self-portrait of Nast. On the floor with a drawing block across his lap, the artist is preparing a new drawing after the last block (signed Th Nast) was thrown on top of the editor’s garbage bin. Emulating a school teacher dealing with an immature student, Curtis instructs Nast, “Don’t make it too sharp, Tommy or you’ll spoil the point.” Nast’s sense of humor is not lost on the pun as the artist uses a knife to sharpen his pencil before drawing his next cartoon with the lash of ridicule. Nast proclaims, “I must be cruel, only to be kind,” directly quoting Shakespeare’s Hamlet.

At the height of his career Nast’s political cartoons influenced public opinion through violent imagery or exaggerated caricatures. Curtis’s method of connecting with readers was more inclined to conciliate, he never supported quarreling or the use of harsh language.