Dating is in the Details 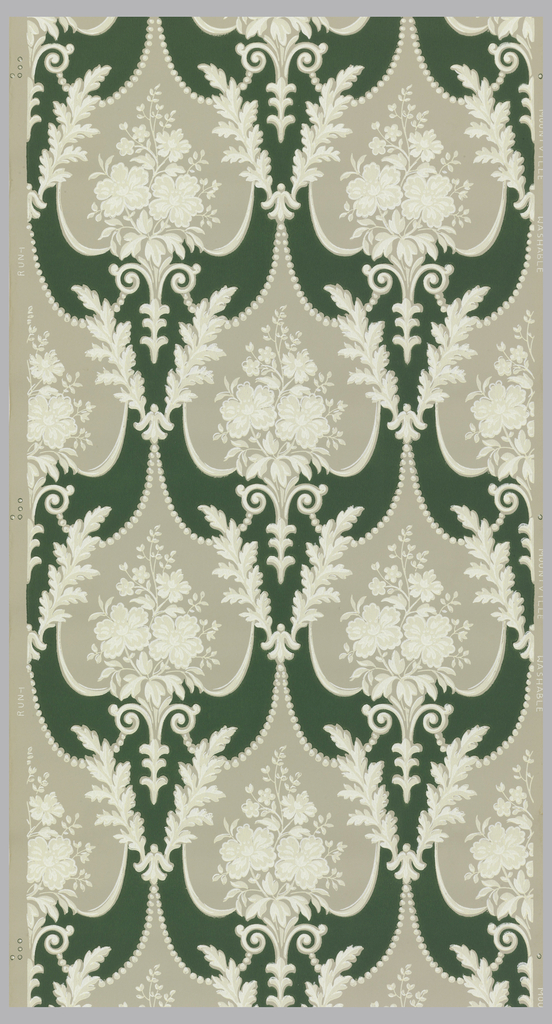 Posted by Gregory Herringshaw on July 1, 2018

The 1950s produced wallpapers that fell into a number of different design genres, ranging from modern to kitsch to traditional styles. This paper definitely falls under the latter category. If it wasn’t for the word “WASHABLE” printed in the selvedge it could easily be confused with a wallpaper produced around 1900. With its repetition of medallions, floral bouquets, and strung beads, it is so similar in style to papers produced fifty years earlier. The one noticeable difference is the color palette as the combination of green and gray were not fashionable ca. 1900. Turn-of-the-century papers usually contained a greater variety of colors, including many subtleties of shades to create a sense of depth. Earlier papers also tended to have secondary patterns happening in the background which helped disguise the dirt as papers were printed with water-soluble pigments and couldn’t be cleaned.

When these wallpapers with large repeating floral medallions were introduced around 1895 they were usually sold in matching sets of wallpaper, border, and ceiling papers. They were almost always produced in multiple colorways so the consumer merely had to select a design style and color. They remained fashionable into the late teens when they were replaced with designs considered more modern, with patterns usually having smaller-scaled ornaments and a more subtle color palette. In the 1950s it was still popular to paper the ceiling but wallpapers no longer came with matching ceiling papers, so consumers could choose from a variety of patterns still included in sample books. Wide borders, however, were no longer fashionable.

I found a similar floral medallion paper produced around 1907 to help show the similarities and differences. The earlier medallions are fancier, more frilly, while the background is almost always covered with some kind of textural pattern. Highlights of metallic gold are also frequently found on these early papers. So very similar in style but clearly of a different date.

Greg Herringshaw is the Assistant Curator in charge of the Wallcoverings Department.

One thought on “Dating is in the Details”