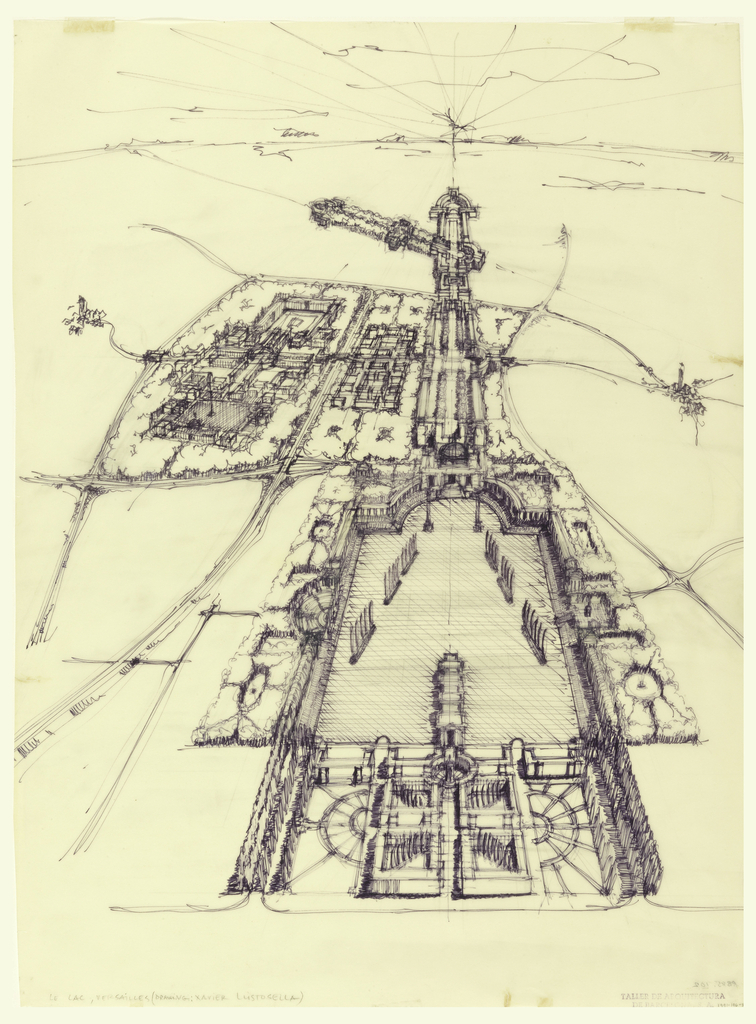 Ricardo Bofill’s architectural design, Aerial Perspective of the Lake, the Arcades, the Viaduct, and the Temple Housing Complex for St. Quentin-en-Yvelines (1981) displays the architect’s concept sketch for a monumental housing project to be constructed in the outskirts of Paris.[1]

While the idea of constructing mass social housing in suburban Paris dates back to the years following World War II, a plan coalesced in the late 1960s before and following the crisis of 1968 when student unrest, demonstrations, and national strikes almost brought the French government to a halt.   The government’s response to civic dissatisfaction was to decentralize universities, and to develop housing estates and social institutions in the suburbs to discourage future mass anti-government movements. Five “New Towns” were envisioned with apartment complexes to be constructed quickly and economically; St. Quentin-en-Yvelines was among these “New” cities.[2]

Ricardo Bofill and his firm Taller de Arqitectura (Barcelona, Spain) was a reasonable choice to fulfill the housing mission as Bofill had worked with economical prefabricated concrete construction.  He brought to the project strong ideas about how  urban fabric should be organized based on Medieval, Renaissance and Baroque examples of the square, street and open space.  Bofill’s concept of building a city based on historical precedents challenged Le Corbusier’s stripped, white, urban complexes devoid of any historical context.  According to Bofill, the form of the buildings at St. Quentin was loosely based on a 17th century French formal garden with hedges replaced by buildings.

Looking at the lower half of the Cooper Hewitt drawing where the Arcades and Viaduct projects appear, the four square apartment blocks with 389 apartments are organized orthogonally (grid-like) like The Palace of Versailles and New York City streets. Above these blocks and reaching out into the lake is the viaduct, depicted from above and comprising another 74 units. This viaduct looks back to Renaissance palaces in the Loire valley like the Château de Chenonceau with its rooms built out over the Cher River.

A second complex, known as The Temple (1986) and connected to The Arcades via garden parterres, sits at the other end of the lake comprising another 200 apartments and appears in the upper half of the drawing.  Bofill called the crescent-shaped columned arcade of this complex an “offshoot of the Parthenon.”[3] These intentional architectural references help to provide the historical context that Bofill strongly endorses.

In 2014, amid mounting critiques to post-modernist architecture, there was a movement to demolish Bofill’s Les Espaces Abraxas housing complex, but a widespread challenge by apartment dwellers held off the wrecking ball from complete demolition.[4] This fortunate interregnum provides time to reconsider these mass housing developments and to see how they wear on government administrators and the public over a longer period of time.

[1] What appears to be a tower in the center of this drawing is two versions of an entry road receding into the distance or coming in from the upper left.  Bofill exhibited and published another version of the Cooper Hewitt drawing in the 1985 MoMA exhibition, Ricardo Bofill and Léon Krier : Architecture, Urbanism, and History, p. 10.  (https://moma.org/documents/moma_catalogue_1778/300296406.pdf)

[3] Charles-Antoine Perrault, “These French Housing Projects Are Right Out of a Sci-Fi Movie, “ January 31, 2012 http://www.businessinsider.com/these-french-housing-projects-are-straight-out-of-a-sci-fi-movie-2012-#le-viaduc-et-le-temple-1982-and-1986-montigny-le-bretonneux-11

← Softly Tiled Walls
Pearls for the Bride, a Lasting Tradition →